M1 wipes out its 19 mobile plans, replaces them with just two

Singapore mobile operator now offers just two service plans at SG$25 for a SIM-only, no-contract base plan that includes 30GB of data and 1,000 minutes of talktime as well as a SG$30 base plan contract that includes the customer's device of choice and 12GB of data.
Written by Eileen Yu, Senior Contributing Editor on May 28, 2019 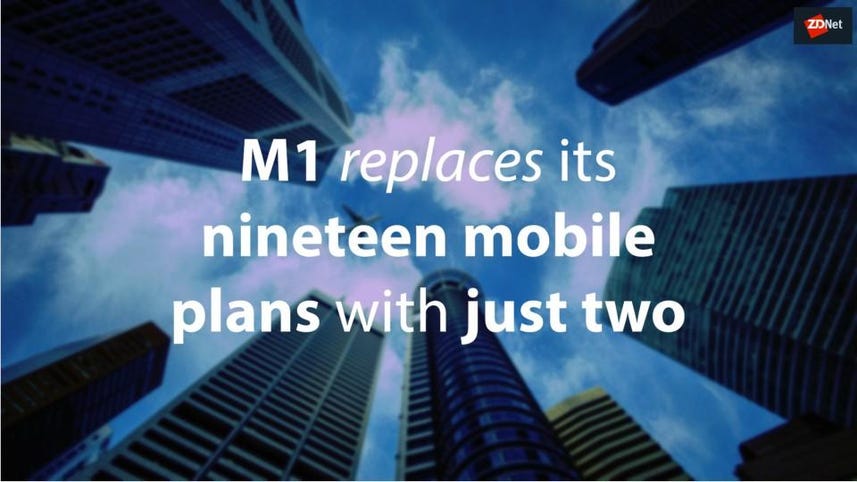 M1 has wiped out all 19 of its mobile service plans and replaced them with just two to cater to customers who do not wish to be tethered to a contract and those who want theirs bundled with a mobile device. The Singapore mobile operator says the move aims to simplify its offerings and cater to customers' needs, giving them a base plan on which they can build by adding the services they want.

The move will provide greater flexibility and personalisation with mobile plans that could be made-to-measure, said M1 in a statement Tuesday.

Starting from SG$25, the SIM-only service plan comes without a contract and includes 30GB of data as well as 1,000 minutes of talktime and SMS. Caller ID service, previously priced at SG$5, now is offered free as is data consumption on weekends. Music streaming on Spotify also is free.

Customers who want handsets bundled with their mobile plans can choose a base service contract that starts from S$30, which includes 12GB of data, 100 minutes of talktime as well as SMS, and unlimited weekend data.

They then can choose from a list of add-on services that offer, among others, more data, voice minutes, SMS, roaming services, and Netflix subscriptions.

The move comes weeks after M1 said it was delisting from the Singapore Exchange following a successful buyout from Keppel and Singapore Press Holdings (SPH). The mobile carrier then said it had begun a "multi-year transformational journey" to better compete in the market and "reinvigorate" its services.

M1 CEO Manjot Singh Mann said on the new service plans: "We believe our customers deserve true value and to pay only for what they need. These easy-to-understand and easy-to-build plans allow our customers to make their own decisions and build it just the way they want.

"Since the recent acquisition of M1 by Keppel and SPH, the M1 team and shareholders have been working hard to crystallise our transformation strategy across all areas of our business, with the primary aim to deliver the best possible customer experience and simplification of the customer journey. Today's launch marks the start of the transformation and will pave the way for many more exciting offers in the months ahead," said Mann, who was appointed to his role last November.

Following last month's buyout, Keppel and Singapore Press Holdings have exercised their rights to acquire all remaining shares in M1 and delist the telco from the Singapore Exchange, so it can begin a "multi-year transformational journey" to better compete in the market.

After months of negotiations, Axiata Group has accepted a buyout offer from the Singapore telco's investors Keppel Corp and Singapore Press Holdings, divesting its 28.7 percent stake and investment in Singapore for an estimated gain of US$31.02 million.

The Australian telco says it is not aware of any concerns specific to its operations in Singapore, where it has a local entity and will have an employee base of some 450.

Singapore telco has commercially launched its nationwide Narrowband Internet of Things network, along with an enterprise customer that is piloting an energy management meter on the platform.