Over 1 million premises are once again on the lowest speed tier available on the NBN.
Written by Chris Duckett, Contributor on Nov. 14, 2019 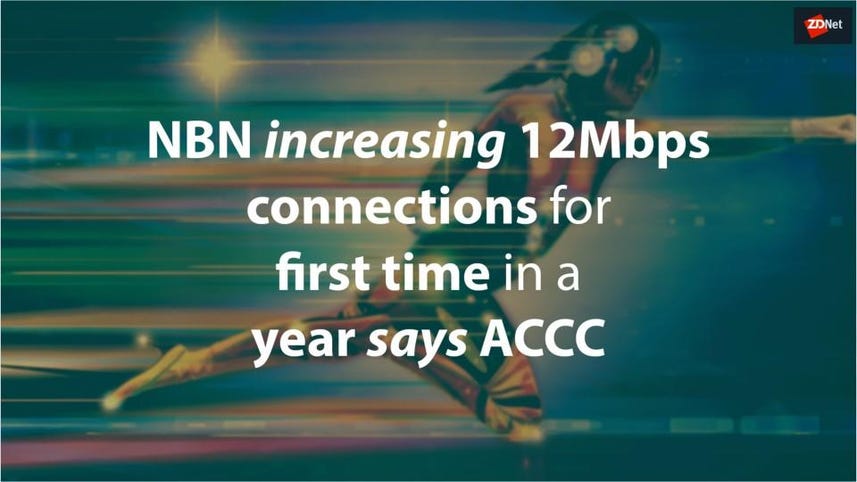 After peaking at 1.2 million premises at this time last year, and heading downward for the following twelve months, the number of premises on NBN's 12/1Mbps plans is once again headed in an upward trajectory.

In its latest Wholesale Market Indicators Report, the Australian Competition and Consumer Commission (ACCC) said that over the three months to September 30, 51,300 premises had connected via a 12Mbps plan, 19,400 signed up to 25/5Mbps plan, and 46,700 more premises connected with a 100/40Mbps plan.

These additions were outweighed by the 385,000 additions to the network on the now standard 50/20Mbps speed tier. Of that number, almost 178,000 were on hybrid fibre-coaxial (HFC) as premises caught up in the HFC freeze were progressively released back onto the network over 2019.

The ACCC pointed out that there are now 2.1 million premises on the lowest two speed tiers available.

"These lower speed products play a crucial role in the transition from legacy services to the NBN," ACCC chair Rod Sims said.

"The ACCC is committed to ensuring that customers who have no need for, or do not want, higher speed services have access to basic affordable broadband products on the NBN."

Last month, the ACCC announced it would launch an inquiry into the lower end of the NBN market, with a particular focus on the basic 12/1 speed tier that NBN offers.

The action by the consumer watchdog follows NBN releasing its latest consultation paper in September, which put forward the idea of offering new 100/20Mbps, 250/25Mbps, and 1000/50Mbps speed tiers.

Average revenue per user boosted to AU$45 for government-owned wholesaler.

If the government-owned broadband wholesaler begins to collect identity data on all Australians, heaven help us.

Optimising workflows and removing paper has allowed Render to speed up municipal fibre deployments in the US.