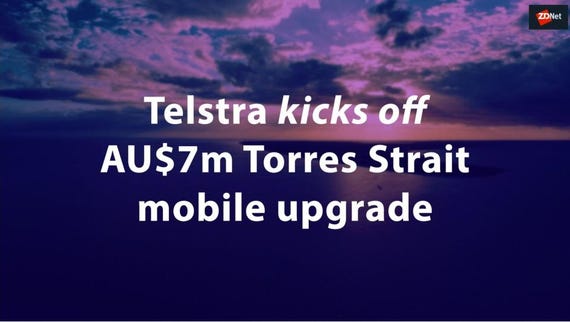 Telstra announced on Tuesday a new project that aims to provide improved mobile network coverage and connectivity to Queenslanders across remote island communities in the Torres Strait.

The project, called the Digital Foundation Project, will receive AU$7.3 million in funding, with Telstra contributing around AU$3.66 million and the Queensland state government and Torres Strait Regional Authority to provide the remaining amount.

According to Australia's incumbent telco, the project will deliver high-speed internet access for mobile device users across 14 of the region's islands by 2021. Currently, many islands across the Torres Strait have patchy outdoor coverage or only have 3G services, Telstra said.

"A large barrier between the islands and mainland is technology and communication, so this upgrade to 4G will ensure we can stay connected which will enhance how we work and learn," said Member for Cook Cynthia Lui.

This follows Telstra announcing at the start of this month that it would switch off its 3G networks in June 2024 and refarm the spectrum for its 5G network.

The telco said until that time, it would look to boost its 4G coverage to a "materially equivalent size and reach" compared to the 3G network. To achieve this, Telstra will look at areas serviced only by 3G and assess its product portfolio, the company said at the time.

On the same day, Telstra also announced that Microsoft had chosen the telco as its exclusive partner in Australia for its "Xbox All Access" gaming package.

The gaming package includes an Xbox One S, access to over 100 games on Xbox Game Pass, and multiplayer support with Xbox Live Gold. This will cost customers AU$27 per month over 24 months.

Customers can alternatively opt for an Xbox One X instead, along with the other features, which would cost an additional AU$14 per month -- AU$38 per month over 24 months.

"Xbox All Access with Telstra will do for gaming what Netflix and Spotify did for the content streaming market. When we first introduced Telstra TV, more than half of our customers had never streamed TV shows or movies before," Telstra Group consumer and small business executive Michael Ackland said.

The Xbox All Access gaming package is the latest entertainment option to be made available for Telstra's modular plans.

Earlier this year, Telstra released its long-heralded simplified data plans as part of its Telstra2022 strategy, which allows customers to pick and choose which phone, data, streaming, or entertainment service they want to opt into.

Australia's incumbent telco is currently offering four tiers of mobile phone connectivity consisting of 15GB, 60GB, 100GB, and 150GB each month for AU$50, AU$60, AU$80, and AU$100, respectively. The data plans are separate from purchasing a phone as Telstra has said it wants customers to avoid being in "lock-in" contracts.

The telco, however, is still selling devices that are paid off over a period of up to three years.

Telstra also confirmed that the next key milestone under its T22 strategy would include a major revamp of its services for small business in January next year.

Telstra must take part of the blame for NBN creation: Chair

Telstra chair John Mullen says Australia would have provided 100Mbps broadband for a majority of the population without NBN.

Spectrum to be shifted across to 5G services.

There is no science that proves ill health impacts from 4G or 5G, Telstra chair John Mullen has said.