Four months after laying activities kicked off, the ASC is ready for electronics to be installed.
Written by Chris Duckett, Contributor on July 22, 2018 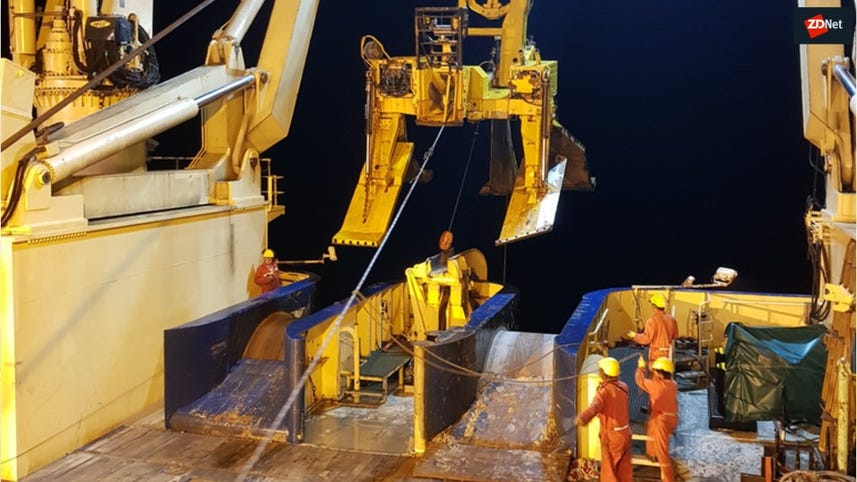 The Australia Singapore Cable (ASC) has been laid, with the final splice made to the south east of Singapore, and is moving into "full configuration" mode, Vocus announced on Monday morning.

CEO and managing director Kevin Russell hailed the work of his team and Alcatel Submarine Networks, with the company stating that the path through the Sunda Strait between Java and Sumatra was very challenging.

"This final leg from Christmas Island to Singapore presented the greatest engineering and technical challenges, and it's a great credit to the team that we [are] on track in final configuration phase," Russell said.

Work on the cable laying began in late March, with the AU$170 million cable laid by the Ile de Batz for 3,000km between Christmas Island and Fremantle through deep water, while the Ile de Ré laid around 1,600km of cable between Singapore and Christmas Island in shallow water using a 40-tonne plough to bury the cable to minimise the risk of damage from fishing vessels, anchors, and environmental elements.

"The sea is shallower and it is also highly tidal," Vocus head of Network Product, Pricing, and Carrier Luke Mackinnon said in March.

"That could be a problem, because cables can move in tidal waters. Over time, they can rub against rocks and suffer from cuts. The other issue is there are many other cables and pipelines in the area. Each time the ship encounters one of these, the cable has to be brought up from the bottom of the sea."

Once the cable made its way to just off Singapore, it was connected via a 10m trench from 10km off the landing station, and then went into shore through a horizontally bored pipe.

Approximately two-thirds of the funding for the Coral Sea Cable will come from Canberra as the government looks to spend around AU$200 million to lock Huawei out of the build, and jointly fund with the Solomon Islands the construction of a domestic telecommunications cable network linking remote provinces to Honiara.

"What we have offered Solomon Islands and what they have accepted is an alternative to the offer from Huawei and ours is cheaper, it's likely to be a faster result for them and technically superior and also more resilient," Foreign Minister Julie Bishop said in June.

The funding is set to be taken from Australian's aid budget, with Australian Prime Minister Malcolm Turnbull saying earlier this month that subsea cables are practical foreign aid.

"We spend billions of dollars a year on foreign aid, and this is a very practical way of investing in the future economic growth of our neighbours in the Pacific," Turnbull said.

The Coral Sea Cable System is due to go live at the end of next year, with the Australia Singapore cable slated for September. Vocus said a ready for service date will be published once testing is completed.