Modern workplace trends like open office plans and hoteling require seamless technology integration and employee buy-in. Here's how to make it work for your company.
Written by Alison DeNisco-Rayome on March 1, 2018 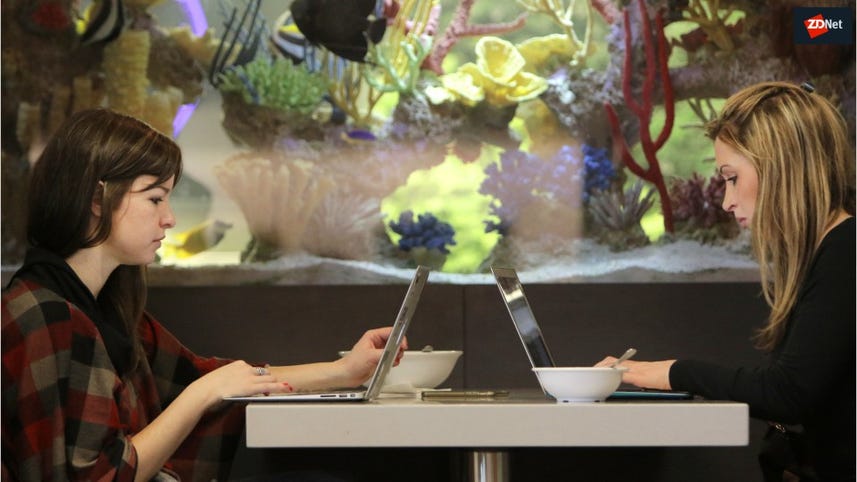 With connectivity allowing more employees to split their work time between the office, home, and other locations, many companies are looking to dig into the data on who exactly is working from where and redesign their office to reflect the realities of a mobile workforce.

At Georgia-Pacific -- one of the world's leading manufacturers of tissue, pulp, paper, packaging, and building products -- executives realized that while 2,700 employees call the company's Atlanta headquarters home, many of them work remotely or from different production facilities. When the time came to renovate the 1982 building, the company began exploring more modern options that move away from traditional offices and cubicles and embrace modern features such as hoteling desks, multiple conference and huddle rooms, and seamless technology integration.

"Like other companies, not every employee was at the office, sitting down in the space reserved for them, 100 percent of the time," said Shawn Kennedy, an IT architect at Georgia Pacific who helped plan for the new space. "The biggest things for employees and productivity are being able to have different spaces to do the kind of work they need to do."

Dubbed the Blue Sky project, Georgia-Pacific removed offices on its 24 floors to create open layouts with lots of natural light. While employees will no longer have permanent desks, they will have the option to move between a sit/stand desk, an individual 'focus room' for heads-down work, a huddle room for small group work, or a larger conference room. Hoteling refers to the short-term provision of non-permanent office space to a worker -- essentially 'renting' a desk for the amount of time you need it.

When looking into the renovation, the company learned that its conference rooms designed for 10-12 people usually only had three or four using them. "Meetings just changed over time," Kennedy said. "We just had all these people working together in small groups, versus traditional board meetings where you have one person talking and eleven people sitting there listening to an update. You're always going to have a few of those, but that's not the bulk of our meetings."

Each floor will now feature an average of 20 focus rooms, 10 conference rooms of various sizes, and 10 huddle rooms, all equipped with technologies to connect with remote employees via Skype, along with a number of other casual meeting areas. The first wave of employees will enter the new office in April.

Mobility was a key factor in the decision to create the hoteling desk system, Kennedy said. Employees will have the ability to move around the floor as well as between floors, and will have the technology to connect seamlessly from any location. A mobile application allows them to book desks or rooms from any location. And each worker will receive a wireless headset that works within a 300-foot range, so they can walk into a focus room to take a call.

Desks will be equipped with dual monitors, a keyboard, a webcam, and a universal dock to plug their laptop into via USB. "We've hidden most of the technology in the workstation, so they just see the USB cord there and the simplicity of just plugging the USB into their laptop, and everything works," Kennedy said.

Hoteling office systems are becoming increasingly common, according to Forrester analyst David Johnson. "Companies are thinking about it from a workplace transformation perspective," Johnson said. "It's not just hot-desking, it's about trying to understand more about how employees work best, what flexibility they need, and what kinds of technologies best support that."

Drivers include wanting to make better use of real estate, as well as providing a better employee experience, Johnson said.

Organizations have experimented with office layouts to drive costs down for several years, said Brian Kropp, an HR practice leader at Gartner.

"When organizations move to this environment, they can decrease direct costs on real estate expense, but they run the risk of decreasing productivity and performance by driving down innovation and making it harder for employees to make relationships with each other," Kropp said. "To be successful, you have to be super thoughtful about how work gets done, and make sure that the hoteling arrangement doesn't inhibit the ability of the organization to continue to innovate."

Employees tend to embrace the idea of having a more flexible way to work, Kropp said. Work-life balance is now seen as a must-have for most employees, particularly in the tech sector: 74 percent of North American office workers report that they would quit their job to work for another company that allowed them to work from home.

"There is a huge expectation of flexibility that employees have," Kropp said. "Employees now believe that they should be able to work on whatever, from wherever, in whatever format makes the most sense for that particular set of tasks. And the idea is if you really want to drive productivity, you actually need different types of workspaces."

Benefits and challenges depend largely on how a system like this is implemented, Johnson said. If the technology is enabled the right way, "benefits overall are a lot less friction to the ability to move around the office and work in different locations, or move between home and the office, without having to carry stuff with you," Johnson said.

However, workers also may become disengaged if they feel like they don't have a home in the office, with their photos, awards, and other knick-knacks, Kropp said. One potential solution may be to have a digital picture frame at each hoteling desk that can recognize the user when they log in, and display their photos.

When moving to a more modern office layout, companies often don't consider the user experience enough, in terms of technology performance and how much flexibility employees need for applications, Johnson said. "If employees perceive that as part of this hot-desking initiative, they're going to lose the ability to install software or get other things that they need, that can be a negative," Johnson added.

Companies have gained a greater awareness of employees' needs to escape busy cubicle or open office areas to get deep work done, Johnson said. "A lot of companies have been moving to a more communal office space layout over the past few years, and that's been catastrophic for people's ability to do deep work," he said. "They have to have some place they can escape to, to focus and concentrate."

Tips for your company

Before starting the renovation, Georgia-Pacific built out a small section on one floor to test different technologies related to IT, facilities, and furniture. This also acted as a pilot space for employees to inspect elements of the project once they were chosen. "They had fears of incredibly tiny desks, and were just imagining the worst," Kennedy said. "Once they saw it, the overall response was, 'I can't wait.'"

The pilot specifically taught the team that support for the technology would be key, Kennedy said. There were also some issues with technology integrations. "They were things we would have learned throughout the implementation, but if we hadn't done them in advance, they would have pushed us past our deadline," Kennedy said.

Georgia-Pacific also set up a website with videos and demonstrations of the new space and tech, and put out regular communications about the project.

Before undergoing an office renovation project like this, Kennedy recommends interviewing employees at all levels and parts of the business to get an idea of what they need from a technology and space perspective.

"Reach out to your current technology partners, and see what they're working on to really be up-to-date," Kennedy said. Looking to other innovative companies in your area and learning their best practices is also helpful, he added. In the end, it's not just getting the latest and greatest technology, but learning what will fit your company's work culture, Kennedy said.

Productivity
Why do college kids get all the cool robots?