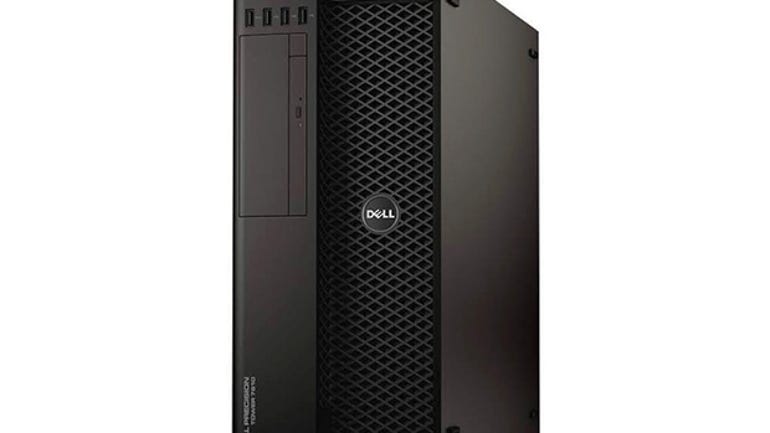 In recent years, the gap between high-end desktop PCs and professional workstations had all but closed, but the release of Haswell-based Xeon processors with support for DDR4 RAM has re-established the divide. Dell has given its Precision workstation family a big Haswell makeover to cope with the demands of engineers, 3D design professionals, CGI animators and others looking for the ultimate mix of graphics plus brute-force processing power.

There's something very reassuring about the all-metal design of the Precision T7810. Not only is it solid and incredibly well built, but it's also very easy to service, with a lift-off side panel for ease of access:

It looks the part too, with alloy handles to help when it comes to lifting and a power supply that can be swiftly pulled out at the back and exchanged should the need arise. Our review unit had an 825-watt PSU, which is enough to handle both processor sockets plus a couple of graphics cards and as much storage as you can get — about which, more later.

Cooling is handled by a bank of three fans tucked away behind the front bezel, plus a couple more in the PSU and yet another between the heatsinks on top of the processors. A lot of removable plastic ducting is used to direct the airflow and most graphics cards will also have fans of their own, so the end result is far from quiet. The gentle hum of cooling fans is, however, something workstation users expect — and, if anything, it adds to the mystique of this type of system.

Another feature is the ability to fully customise the components inside the Dell workstation rather than have to make do with a standard specification. Preconfigured Precisions are available, but the details can all be tweaked and there are lots of options to choose from — not least when it comes to the new Xeon processors.

Workstation buyers tend to opt for a fully populated setup right from the get-go, so our review system came with a pair of 10-core Xeon E5-2650 v3 processors, clocked at 2.6GHz (3GHz in Turbo mode) and rated at 105W. These sit towards the top of the E5-2600 v3 line-up, which numbers some 20 SKUs ranging from 4-core to 14-core processors (with 16- and 18-core CPUs still to come), with TDP ratings between 55W and 160W. There are plenty of 22nm Haswell Xeon options to suit a wide variety of workloads.

However, as with any new processor range, some of the high-end chips can be very expensive indeed. Upgrading the review system to 14-core processors, for example, would have added £2,257 (ex. VAT) to the asking price. Still, that kind of outlay is expected in the workstation market and, given the potential performance uplift, could be seen as as good value.

You'll want plenty of RAM to go with that processing power, 8GB per processor being the minimum you can get away with. Our review unit had double that (32GB overall) but you can specify up to 128GB to go in the eight available DIMM slots; and when 32GB DIMMs become available, memory capacity will rise to 256GB. The latest DDR4 RDIMM technology is employed here, using ECC protection plus Dell's own Reliable Memory Technology (RMT) to detect and correct memory errors in real time.

Driven at 2,133MHz, DDR4 memory helps further boost application performance — although, again, be aware that it can prove expensive. Just doubling the 32GB in the review system, for example, would add almost £500 (ex. VAT) to the price.

Of course the most important part of any workstation has to be the graphics adapter, and here you're really spoilt for choice.

Our review unit came with a Quadro K5200 from Nvidia, which is equipped with 2,304 parallel processing cores and 8GB of GDDR5 video RAM. This enables it to return 147.64 frames per second (fps) when tested for OpenGL performance using the Cinebench R15 benchmark.

This is a good choice for demanding 3D work and animation duties, but you could do even better by opting for the new Quadro K6000 which has an even more impressive spec (2,880 parallel cores, 12GB RAM) — albeit with the same pricing implications as for other upgrades. Either way, the Quadros can be cabled to up to four monitors, with two DisplayPort and two DVI connectors provided for just this purpose.

You could even add a second Quadro card and hook up 8 monitors — assuming your budget can stand it, of course. Those with more limited means can specify lower-spec Nvidia cards and, should you prefer AMD FirePro, there's a full range of those on offer too. Nvidia's Tesla general compute cards can also be specified.

Finally there's also the matter of storage, with a number of choices to be had here too. Our system came with a 256GB SSD configured as the boot disk plus a 1TB magnetic disk for data — a decent enough starting point, but somewhat limited in terms of capacity, especially if you're working on large video files or complex models. Moreover, although adding extra drives is straightforward and both software and hardware RAID options are available, there aren't that many bays inside the Precision chassis to take more disks.

In fact there are just two in the base of the tower, plus room for an adapter to take a couple of 2.5-inch drives in the space next to the DVD writer. You can always plug in external disks, but more bays inside would be nice. If that's an issue, the Tower 7910, which has more internal bays, may be a better option.

Some buyers may also want to go all-SSD for maximum storage performance, but that will be expensive and also limit capacity, so Dell has also added support for SSD caching on spinning hard drives. Based on Intel's CAS-W software, which is available as an option on all the new Precisions, CAS-W uses SSD to boost performance without compromising on storage space or breaking the bank.

Other notable features include 10 USB ports (four at the front, three at the back and three more on the motherboard), four of which support 5Gbps USB 3.0. You can also add a Thunderbolt card, while Gigabit Ethernet is built onto the motherboard for network attachment. Windows 7 Professional was preinstalled on our review system, with a copy of Dell's Precision Workstation Optimizer — for quickly optimising hardware and OS settings to suit leading workstation applications — thrown in for good measure.

The Precision Tower 7810 is a very impressive workstation that delivers significantly more performance than its Ivy Bridge-based predecessor while retaining the many configuration options needed to take full advantage of the extra CPU muscle. The keyboard and mouse included in the base spec aren't quite in the same league, but are easy enough to replace. That apart, the T7810 is simply made for the (workstation) job.