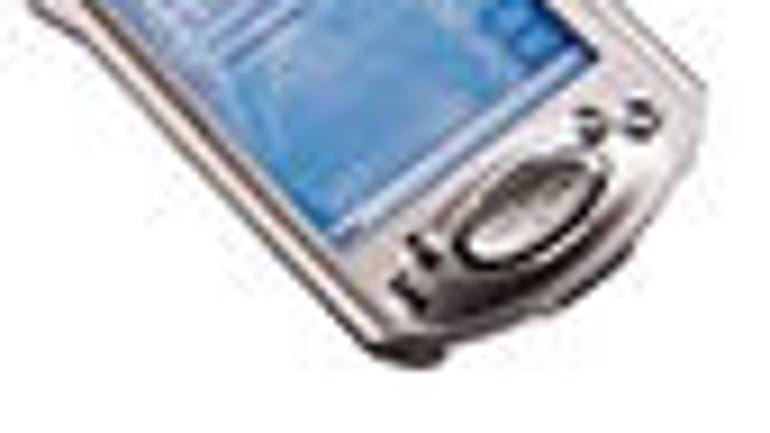 Compare HP's iPAQ H3950 to the company's iPAQ H3835, and you'll notice two important upgrades: a new, transflective LCD and the faster Intel XScale processor, which runs at 400MHz instead of 206MHz. That's all well and good, and we expected a price bump for these improvements. Unfortunately, the £500 H3950 is not only expensive, but it costs slightly more than competing products such as Toshiba's e740, which has more features, including Wi-Fi connectivity.

Design
Cosmetically, the H3950 looks identical to its 3800-series brethren. At 185g, it's fairly compact but not as lightweight as Toshiba's e310 or the Asus MyPal A600. Like the 3800-series, this handheld has a sleek silver case and a dark-plastic bulge at the top of the screen that houses the speaker and the Secure Digital (SD) card slot. The nicely designed fold-over screen-cover sleeve remains on-board, and most users will prefer it to the slipcover protective cases that ship with the majority of Pocket PCs. Another plus: since the 3950 is the same shape as earlier iPAQs, this model is compatible with all existing iPAQ sleeves and accessories. As noted, the one major external change is the screen: it's transflective, meaning that it's backlit for use indoors and in dimly lit situations but also reflects ambient light for viewing outdoors in sunlight. The 2.26in.-by-3.02in. LCD is brighter, has better contrast, and boasts more vivid colours than those of previous iPAQs and Toshiba's XScale-based competitor, the Pocket PC e740. It's also a bit easier to tap accurately on the new iPAQ's screen because the LCD and the digitizer -- the glass or plastic that you tap with the stylus -- are closer together. The sidelight used to illuminate the reflective displays found on other Pocket PCs requires a larger gap between the LCD and the digitizer. The unit comes with both a cradle and a relatively compact power adapter. We have no major complaints about either, but if you want to recharge your iPAQ on the road, you'll need to attach a small, easy-to-lose dongle to the end of the power cord in order to adapt it to the device's port.

Features
Under the bonnet, you'll find Intel's new XScale processor, the 400MHz PXA250, along with 64MB of RAM and 32MB of ROM. The additional speed will eventually enable better video playback, more sophisticated gaming and better data-security systems, but you'll need to wait for new applications that take advantage of this chip (see the Performance section for more detail on the 3950's processor). As noted, you get one SD/MMC card expansion slot, but there’s no second CompactFlash slot as on Toshiba's e740. Step up to the £595 H3970, and you'll get an integrated Bluetooth chip as well as 48MB of ROM. In both the 3950 and the 3970, not all of the ROM is used for the system software: the remaining memory is employed as non-volatile storage space so that you won't lose critical data if you run the battery all the way down -- a nice plus. In the Settings menu, there's a program called Permanent PIM that lets you keep your contacts and appointments in system ROM. However, Permanent PIM can't store files, applications or other data. iPAQs generally come with a healthy set of extra software on top of the standard Pocket PC 2002 applications, which include Pocket versions of Outlook, Word and Excel, as well as Windows Media Player and Reader (for viewing e-books). iPAQ Backup is a more comprehensive backup program that lets you store all kinds of data on an SD card so that if you ever run the device's batteries down completely or hard-reset the device by accident, you can easily restore your files. iPAQ Image Viewer does just what you'd expect -- it allows you to view JPEGs from digital cameras as well as create photo albums and slide shows. Finally, Nevo -- with a little help from the H3950's consumer-grade infrared -- turns your iPAQ into a universal remote control for your home-entertainment system. The 3950 is no Philips Pronto, but it's easy to use, and if you have the patience to program it, this handheld makes for a serviceable remote. HP also bundles IBM's Embedded ViaVoice Mobility Suite, which lets you dictate commands to your calendar, your contacts and your in-box. The iPAQ can even read back the contact names, numbers and addresses that you request. Also included on the CD-ROM are a special data-encryption package, Insignia Java Virtual Machine, and other useful software.

Performance
The H3950's XScale processor is supposed to offer not only faster performance but also energy conservation. In our tests, this model fared slightly better than the 3800-series. Playing MP3s with the backlight set to 50 percent brightness, the H3950 lasted for 4 hours and 34 minutes before switching off; the H3835 lasted 4 hours, 2 minutes under the same conditions. That's not bad considering the H3950's better, brighter screen. All in all, we were very impressed with the iPAQ's transflective, TFT LCD, which is capable of displaying 65,536 colours at 320 by 240-pixel resolution and a 0.24mm pixel pitch. In fact, the 3950 has the best screen that we've seen to date on a handheld -- it's definitely superior to that of the Toshiba e740. When we played games such as Bounty Hunter 2009 Pinball and Tennis Addict, we noticed that the picture was sharper and the colours were more vivid. Still images also looked better. Many handhelds fail to produce really deep colours and have hazy-looking screens, but the 3950’s colours were deeper and more true to life. We were also pleased with the processor's performance, although it wasn't the best we've seen to date. Games certainly played smoothly, with few or no hiccups, and MP3 playback was also fine. But while video performance was generally acceptable, the system faltered a bit when we challenged it with an MPEG encoded at a high frame rate. In scenes involving lots of action and movement, the 3950 stuttered and dropped frames. This is equivalent to the video performance of the Toshiba e740 but slightly behind that of the Asus MyPal A600.