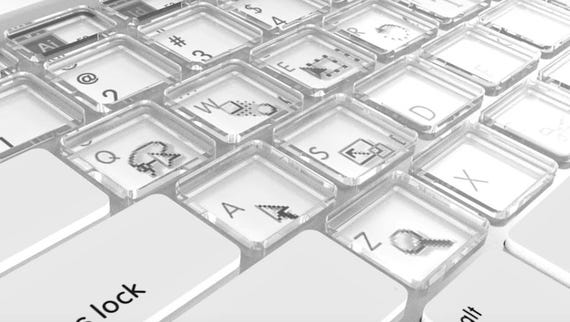 Unlike some of us, you probably don't set out with your iPhone or Android phone as your only computer. You've got a laptop and perhaps a tablet for getting work done. Even so, sometimes the phone is all you've got with you when the need to write a detailed email or work on a document. That can be a challenge tapping on the little keyboard on the screen.

There are quite a few portable keyboards available that can step in when you need to do a lot of writing. Free time with the iPhone or Android phone can turn into unexpected productive time with the right accessory.

See related: Tips: How the iPhone 6 Plus and Android phones can do real work | iPhone 6 Plus: Changing the way I work in a big way

I've scoured the web and found 10 portable keyboards for iOS and Android that are worth checking out. I only considered units that are as small as possible for transport, yet offer a nearly full-sized keyboard for touch typists. You can toss any of these in the smallest bag and forget it until you need to get to work.

While I use keyboards like these with my phone, they will work with tablets, too.

I haven't used all of the keyboards on the list but those I have used include a link to my hands-on review.

Folding keyboards are the most portable format, and this one from ZAGG takes a unique approach. It folds horizontally, putting the fold between two rows of keys rather than between individual keys. It features an integrated stand that can handle large phones, but in our testing it wasn't stable with tablets.

It automatically powers on when unfolded for use and shuts itself down when closed for transport. The integrated battery is rated at two years on a charge, so if you're like most gadget users you'll likely stop using it before needing to charge the battery.

Unlike some keyboards in this collection, the Pocket Keyboard has no control keys for iOS nor Android.

See the full review of the ZAGG Pocket Keyboard on ZDNet.

This keyboard doesn't fold up, but it's barely thicker than the cover of a paperback book so it's easy to slip into a pocket on any bag. It features mechanical keys that are encased in a dust and spill resistant material, perfect for a portable device that may be used anywhere.

While the keys are molded inside the fabric covering, they provide a good typing experience in my testing. Rapid touch typing can be achieved with no adjustment time.

The Keys-To-Go has no stand for the phone, so a phone case with an integrated stand would be advisable to use with this keyboard.

See the full review of the Logitech Keys-To-Go on ZDNet.

This keyboard is the most unique ever produced. No bigger than a small ruler, the TextBlade consists of three pieces that connect magnetically to form a full keyboard. It uses big keys that represent a QWERTY key layout with each key used for several characters.

The design is such that spacing mimics that of other keyboards, and reviews have been pretty good. It is expensive but is well constructed. It comes with a small stand for phones.

The TextBlade is shipping but backordered so there is a wait to get one delivered. I am waiting for my unit to ship, currently scheduled for April.

This keyboard was recently debuted by Microsoft and looks to be a solid option for those wanting a portable keyboard. It folds in half and has low profile mechanical keys.

The fold runs vertically down the middle of the keyboard and has a wide gap for the fold. This may make it hard to adjust to for some typists.

The Microsoft Universal Foldable Keyboard is not available for purchase yet so no testing has been possible.

The Universal Foldable Keyboard is "coming soon" for $99.95.

This keyboard has full-sized keys with a design that folds in half. Like the Microsoft keyboard previously covered, the Perixx model has a gap at the fold which may not be ideal for some.

This keyboard is nothing fancy but has a low price that may make it worth a try.

Note: this keyboard does not include a stand for the phone.

Another keyboard that folds down the middle, the Matias is wider than all of the others. As a result, this is an unusual portable keyboard as it has a numeric keypad like those on some laptops.

The keys on this unit look to be the same size as those found on laptops, with a similar spacing between the keys.

The Matias does not include a stand for the phone.

Those familiar with the Stowaway portable keyboard from years ago will instantly recognize the Amigo. The trifold design can fit in a shirt pocket when closed and unfolds into a keyboard about the size of most of those in this collection.

As is the case with many folding keyboards, the Amigo probably can't be used in the lap. Set it down on a flat surface and open it up and you'll find a nice keyboard that can handle the heaviest work load.

The Amigo comes with a small stand that the OEM says can even handle an iPad.

When you think of the Brookstone store in the mall, you don't think of portable keyboards. They have one, though, and it looks to be a typical model.

It folds in half and has a nearly full size keyboard. The battery and charging port are in a housing that extends out of the left side of the keyboard.

This keyboard does not come with a stand, and while the OEM doesn't claim Android compatibility most Bluetooth keyboards work fine with Android.

Another keyboard that folds in the middle, the iwerkz has chiclet keys that mimic those on most laptops. There are hundreds of online reviews that give this keyboard high marks.

As with other folding keyboards, there is a narrow gap running vertically down the middle that takes a little time to get used to.

The iwerkz comes with a protective case for transporting the keyboard which forms a stand for the keyboard. The keyboard and matching case are available in several colors.

This is a trifold unit that uses a larger section in the middle and two ends that fold back over the larger piece for closing. The unit locks in place when fully opened for typing.

The keys are higher profile than some keyboards and look to have decent key travel. The layout of the keys is like those on laptops, minimizing adjustment time when moving back and forth between devices.

Join Discussion for: 10 portable keyboards for iPhone, iPad, and...