The Ultimaker 3 is a fine printer, but there are still some tweaks you might want to make. In this edition of the 3D Printing Discovery Series, we showcase two great (and necessary) mods for the Ultimaker 3.
Written by David Gewirtz, Distinguished Lecturer on July 14, 2017 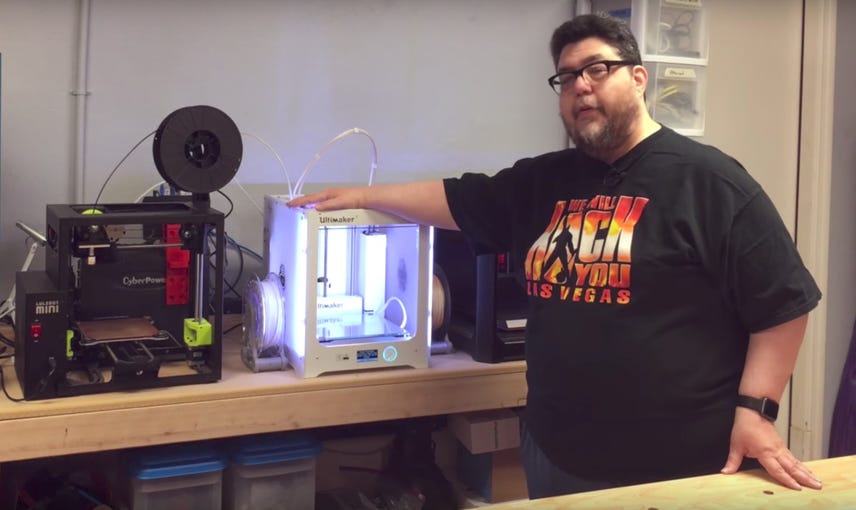 Welcome to the latest edition of the DIY-IT 3D Printing Discovery Series here on ZDNet. As the accompanying video shows, we're going to build some mods.

I've been really enjoying exploring the Ultimaker 3, but I needed some mods to make working with it in the shop easier. Fortunately, there were some great designs already up on Thingiverse, so I downloaded them, printed them, and put them to use.

First, there's the holder for spare print cores. The Ultimaker 3 is a dual-filament printer. It uses different cores for regular PLA printing and printing dissolvable supports for PVA. When you get the printer, you get three cores, but only two live inside the printer at any given time.

That's where the Ultimaker Printcore Holder by Thingiverse contributor Logan Rose comes in. It was a quick, easy print. As you can see, it hangs from the side of the Ultimaker and fits the spare print core like a glove.

How filament loads on the Ultimaker 3

Up next is a brilliant and incredibly useful design by Thingiverse contributor Jason Powell. I'll describe the problem I needed to solve, then I'll show you the prints I made to solve the problem.

At issue is the fact that the Ultimaker 3 loads filament from the back. It uses what's called a Bowden tube, so named because either Sir Frank Bowden or Ernest Monnington Bowden invented a bicycle break mechanism where a wire is guided through a flexible, hollow, outer tube.

Some 3D printers, like the Ultimaker 3, use these Bowden-style extruders. The motor that drives the filament is mounted in a fixed location on the frame, and a tube guides the filament from the drive motor to the hot end.

This can reduce the weight of the extruder, thereby decreasing inertia, which in turn can increase the speed at which the extruder can change direction.

In any case, the drive motors for the Ultimaker 3 are located on the back of the unit. The machine also came with a special filament holder, designed to be placed at the back of the machine.

I'm not a big fan of loading filament from the back of a printer. It's not particularly user friendly, often necessitates moving the machine, and doesn't fit many workbenches. So I found a workaround.

The benefit of the UM3's filament holder is that it has a NFC sensor that can read encoded data from Ultimaker-branded filament, and it can set up all your printing values automagically.

That said, another issue with the provided filament holder is that it doesn't quite fit larger spools, which I also discovered when I first set up the printer.

Unfortunately, once you add the length of the filament holder and the gap you need to slide on some filament, the Ultimaker 3 requires a full 9 inches of empty space behind the printer.

The printer itself is 15 inches deep. At that size, it fits just fine on my 20-inch workbench. But adding another 9 inches puts us at 23 inches, which is too deep for my bench. I just don't have that much space back there.

I needed to find a different way to hold filament, which brings us to today's second mod, these very cool filament holders.

What Jason Powell designed was not just one design on Thingiverse, but an entire filament holder system. The holder is based on four key components: A base arm, a spinner arm, a pair of small rods, and a thicker rod that holds the spool.

He has a bunch of different sized bases and arms of different sizes, so you can get the right size rod for the thickness of your spool. These screw together interchangeably and work just perfectly.

For the Ultimaker, I printed out two arm mechanisms and a bunch of different rod sizes. When I'm using two filaments, I put spool holders on both sides of the printer.

When using one filament, I use just one spool holder and feed the filament into the drive mechanism around the back.

I'm still not thrilled with the necessity to reach around to load filament, but these spool holders solve the problem effectively. I do wish I could still use the NFC sensor in the Ultimaker provided spool holder, but the wire that attaches it is just two short.

It'd be very cool if Ultimaker were to release an add-on NFC sensor on a cable that would allow it to read data off of a spool, regardless of whether the spool holder is in the back of the printer.

So, there you go. The Ultimaker 3 is a fantastic printer, especially with its dual filament capabilities. While the rear-loading mechanism can be impractical for certain work environments, a workaround is certainly easy enough to put together.

That's the power of 3D printing. You can make your own parts, mods, and accessories.

Given the large selection of designs that makers are freely sharing on Thingiverse and other 3D object sites, you often don't even need to design those mods yourself. They're just there to download and print.

That's it for today. Go out there and make something great!