3D printing hands on: Understanding the difference between Delta and Cartesian printers

You may have heard the term "Delta printer," but what does it mean? We compare and contrast traditional Cartesian 3D printers with Delta printers.
Written by David Gewirtz, Distinguished Lecturer on March 24, 2017 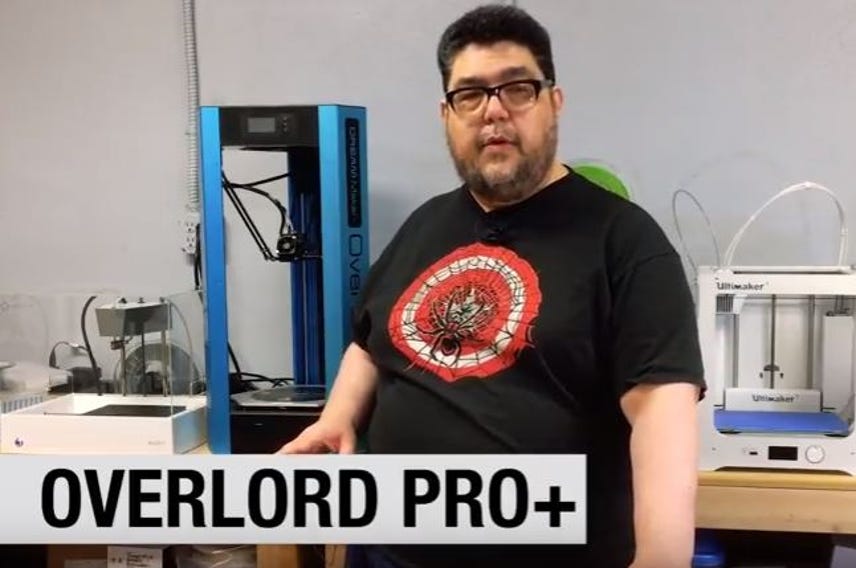 Fused deposition modeling printing is the most common printing method used in 3D printing. The two key words are "deposition" and "fused". Basically, what an FDM 3D printer does is heat up plastic, extrude it out of a nozzle, deposit that plastic onto either a printer plate or already deposited plastic, and fuse that new plastic to the old.

For any given layer, an FDM printer needs to position the print head at a certain X,Y coordinate, begin extrusion, and move the head to the next X,Y coordinate. After each location is reached, the printer either continues to extrude plastic or withdraws the plastic a tiny bit so that it can move the head without depositing any material.

It keeps moving, either depositing or pulling back material, until an entire layer is complete. Then rinse, wash, repeat for a new layer.

Exactly how each printer does this is often different. The inexpensive New Matter MOD-t printer moves the build plate on both the X and Y axis, and the print head moves up and down on the Z axis.

The LulzBot Mini also moves the print head up and down, but the X axis movement is on a gantry attached to the print head, while the build surface moves front and back along the Y axis.

If that seems hard to follow, see the attached video for a demonstration.

Delta printers also use the Cartesian coordinate system, but they don't use linear-motion tracked movement to deposit filament. Instead, they use three arms, each a parallelogram, and while they also move from one X,Y point to another, they do so by changing the angles of the parallelograms.

The Delta printer, like the DreamMaker Overlord Pro+ I introduced last week, is one application of a more general concept, the Delta robot. The Delta design is used in packing, surgery, and, of course, 3D printers.

The key benefit to the Delta design derives from physics. The arms of a Delta robot hang down from a fixed platform and all of the mechanics to drive the motion exists in that platform. As a result, the business end of a Delta robot (i.e., the print head in a Delta printer) is far lighter than if it also had to contain motors for movement.

The reduced weight has the benefit of reduced inertia. If you recall from high school physics, a body at rest remains at rest, while a body in motion remains in motion. By reducing inertia, particularly the inertia present at the end of a move, the production head should be able to respond quickly, while retaining accuracy.

Plus, it looks really cool.

Because the entire print head is supported by relatively light-weight sticks, there's the possibility of alignment failure, particularly after a lot of use. The parallelograms also have a bit of give in them, and so many users of Delta 3D printers have built brackets to tighten up the slop in the movement of the arms.

Since a Cartesian printer's heads move linearly, the largest object a typical Cartesian printer can build is usually in the shape of a rectangle. In other words, there are corners, including the 0,0 origin point. A Delta printer does not move linearly, so its natural shape is a circle. This means that, in terms of what can be fit on a build plate, rectangular objects tend to be rather small.

Commercial Delta printers often make up for the small base build area by going up, far up into the Z-axis. As the image below shows, I'm printing an arrow on a very small base, going up into the air quite some distance.

It's not fair to say that one printer style is better than another. They're different designs and approaches to the problem. On the other hand, if you're buying your first desktop 3D printer, I wouldn't recommend getting a Delta printer.

They're not quite as common as Cartesian printers. Until you're really familiar with how to place and structure a 3D print, the extra thought that goes into a small base and an outsized vertical build area could cause frustration.

On the other hand, if you've been using a 3D printer for a while, you understand how to orient a print for the best results, and you understand the strength and layer adhesion issues of having a lot of layers and not a lot of horizontal run space, then definitely consider a Delta printer.