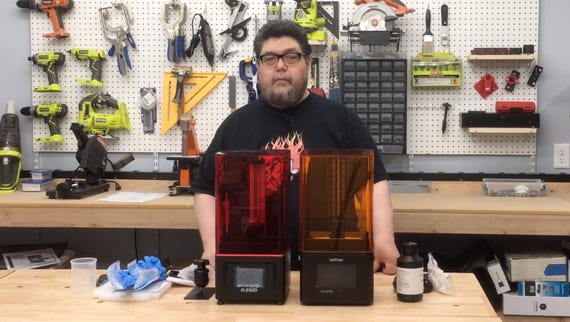 Welcome to the latest installment of ZDNet's DIY IT Discovery Series on 3D Printing. Today, we're looking at our first two SLA printers.

We've been working with FDM (Fused Deposition Modeling) printers for quite a while. That's the kind of printing that lays down layers, one on top of the other. FDM printers use rolls of plastic filament, heat the filament, and extrude it out of a nozzle. As one layer is deposited on top of another, they fuse together into a finished object.

These new printers are quite different. They are called SLA (Stereolithograph Apparatus). They have a vat of goop, a resin. This is a liquid plastic that cures by light exposure. As each layer is exposed to light, it cures. Then, layer-by-layer, the object is lifted out of the resin tank.

Attached to this article is what was supposed to be a box opening video. Unfortunately, the front-facing camera did not capture anything except for the two boxes. No sound, and none of the actual opening got caught on film. My side camera did capture the unpacking. You can watch a quick clip of that at the end of the attached video.

This video is round two. Sometimes you just have to do things twice. Ah, well. Technology. Gotta love it.

In any case, what we're looking at is an ELEGOO Mars printer and a Zortrax Inkspire printer. They're very similar in size, but the ELEGOO is $350 and the Zortrax is $2,000.

Over time, we're going to learn what the differences are and discover when you can get by with a $350 printer, and when you need a $2,000 printer.

Today, I'm excited to give you a first look at these printers, because we haven't had the opportunity to check out any SLA printers before.

In terms of first impressions, the $350 ELEGOO Mars is substantially lighter physically than the $2,000 Zortrax Inkspire. It just weighs noticeably less. The Mars, like the Inkspire, has a plastic shell to protect against light, but the Zortrax plastic shell is just about twice the thickness of the one on the ELEGOO.

They both look like they have pretty excellent construction. They use different light curing technologies. I'm still learning about that. When I know, I'll pass that knowledge on to you.

From a practical standpoint, the $2,000 Inkspire came with resin out of the box, so you could theoretically start working with it right away. The $350 Mars printer did not come with any resin, so I have to get some. Both of them came with a variety of accessories like power, clippers, memory cards, gloves, funnels, scrapers, and more.

The thing to know about SLA printers is that they are messy. The resin is toxic, so you don't want it on your body. I might end up wearing a lab coat or a covering smock, because I don't want it on my clothes, or my arms, or my hands. The printer tending process tends to produce drips, so I'm going to need to build a structure underneath so that the goop that comes out doesn't go onto the workbench or whatever else I'm working with.

In the video, you'll see the build surface. It's smaller by at least half than any FDM 3D printer I have. It's probably 30% to 40% of the build area of the LulzBot Mini.

The benefit of SLA printers is that they produce very detailed small objects. They're used to create molds for jewelry, specialty industrial models, and even teeth. As we explore these two printers, we're going to get a chance to take a look at whether the resolution is better with the much more expensive printer, as well as a lot of other aspects involved in getting set up to produce SLA-based 3D prints.

For now, I'm waiting for resin for the ELEGOO Mars, getting to know these printers, and figuring out how to set them up. Most important, I have to make sure that I have a safe working environment. So far, I built a little SLA station out of some wire shelving units. You can see that below.

Stay tuned. There's a lot to be learned from these exciting devices. If you've used an SLA printer before, feel free to tell us about your experiences in the comments below. And, as always, go out there and build something great!