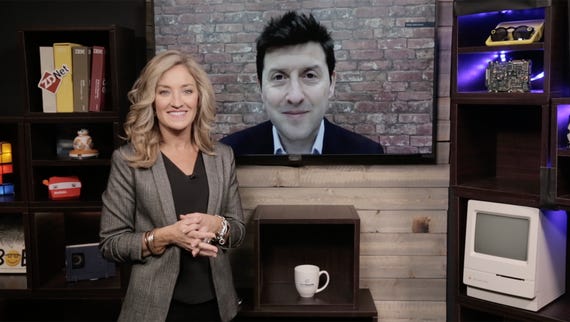 After the Windows 10 boom, the PC will change again. Here's what will happen next
Watch Now

First, the good news for PC makers: the global PC market recorded its first full year of growth in eight years in 2019. Taking into account desktops, notebooks and workstations, just over 268 million devices were shipped. That's up a handy 2.7% on 2018.

But even that limited growth in PCs is focused on the biggest manufacturers, who now account for two-thirds of all shipments. Lenovo is the biggest PC maker according to tech analyst Canalys, with nearly 65 million devices shipped; HP comes second with 63 million, with Dell in third. Fourth-placed Apple managed to grow its market share, although Acer, in fifth place, saw a decline from 2018.

Despite an economic slowdown, Canalys said that the US remained a healthy market for PC shipments, growing 7% year-on-year to nearly 18 million devices. Shipments in Europe only grew about two percent, perhaps because UK businesses held back on spending due to worries over Brexit.

Now, the bad news: even last year's modest uptick in PC sales is unlikely to be repeated any time soon. According to Canalys, PC sales are likely to decline for the next few years at least, and fellow tech analyst firm Gartner has made a similar prediction.

Canalys pointed to broader macroeconomic factors that will impact the PC industry heavily, with key markets like the US, Japan and India expected to under-perform.

On top of that, the boost to PC sales from businesses junking old Windows 7 machines and replacing them with new hardware running Windows 10 is coming to an end as those projects are completed.

There is no monolithic 'Windows 11' due to arrive in a few years (Windows 10 will simply get rolling updates from now on), which means there isn't another big upgrade deadline ahead to prompt a big boost in PC sales.

To make things even worse, the innovations that PC makers have been playing with, like 5G and folding screens, aren't likely to translate into serious demand -- at least not yet.

5G and foldable displays will bring some excitement, but both are still in an experimental phase, said the analyst firm.

Ben Stanton, senior analyst at Canalys, told ZDNet: "Detachables have been around for many years, but the proportion of the total Windows device sales which are accounted for by detachables has stagnated. It is no longer growing as a proportion.

"Several vendors have highlighted foldables as the next big thing in PCs, but from a volume perspective, we are not expecting these devices to make a significant impact in the coming years. Early implementations will likely be limited to ultra-high-end, and still lack a use case," he said.

Likewise, 5G is still waiting on the broader ecosystem of services to arrive that would justify the extra cost, with the mainstream of both technologies still a good two to three years away.

So what does this mean for PC users and the businesses that buy and support them? None of this is to say that the PC is 'dead': around 250 million new PCs every year is still a vast number of devices -- even if it is now dwarfed by smartphone sales, which are more like 1.2 billion per year.

And there are somewhere around 1.2 billion PCs in use across the planet that are still in use. Part of the problem is that these PCs are now good enough that they just don't need to be replaced as often as before, especially when you throw in the free and regular Windows 10 updates.

But it's also hard to spot an obvious way for PC makers to boost sales again.

Smartphone makers, who are facing a similar problem, are increasingly turning to services and subscriptions (like music or TV or digital payments) to increase the loyalty of their users and encourage them to upgrade. None of these are obvious options for PC makers; most efforts in this direction have been dismissed as bloatware, while introducing ads to the Windows start menu has just annoyed people. But there is another services option for PC makers.

SEE: Windows 10 upgrade rush got us buying PCs again - but not for very long

"Services are actually an important part of the business model for PC OEMs, but it is not so much flashy consumer-facing services. Instead these companies are specializing in enterprise services," said Stanton.

"They can consult on workforce transformation, help manage setup, data migration and deployment of new equipment, offer maintenance and helpline support, and even asset recovery and recycling at the end of a product lifecycle. Increasingly, these companies are packing together their different capabilities and offering a fully fledged 'PC-as-a-service' option to their enterprise customers," he said.

Businesses (and to some extent gamers) will increasingly be the main constituency that PC makers will need to target. PCs are still the main tool of business -- just try writing a report or building a spreadsheet on a five-inch smartphone screen.

Business users have some pretty straightforward demands. They want better battery life and more power (never an easy trade-off) in a lighter frame, with better screens -- the same but better, in other words. Beyond that it's hard to see where the next must-have feature is coming from. Improved ability to work across a PC and smartphone is one option, but that seems to be a relatively niche use case. Still, surely it's preferable for PC makers to do a good job for the business buyers that still care, rather than chase after consumers who care less and less.

Which new features would encourage you to invest in a new PC? Let us know in the reader comments below.

Join Discussion for: After the Windows 10 rush ends, this is what...