Alibaba Cloud is playing up its focus and investment in Asia as a key competitive advantage over its US competitors, while remaining coy over how the US government's treatment of Huawei may potentially impact other Chinese technology vendors. Executives from Alibaba's cloud business point to the company's data centre footprint in the region as well as market share as indication it is edging out other global market players. 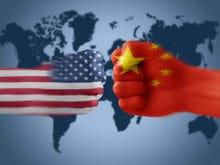 Alibaba may stoke US paranoia with cloud move US disdain for Huawei over cyberspying allegations hasn't been extended to fellow Chinese peer Alibaba, but will the latter stir up similar concerns as it makes aggressive moves into the cloud?

The cloud vendor also built up a community of more than 10,000 partners that included Orange, SAP, Deloitte, SoftBank, Intel, and KPMG. This ecosystem was key in ensuring its service portfolio was localised for customers in Asia-Pacific, said Selina Yuan, president of Alibaba Cloud International, who spoke on Thursday at the company's cloud summit in Singapore.

"We want to be the cloud in Asia, for Asia," Yuan said, adding that the vendor had been building out its datacentre footprint in the region since 2014.

Home to the world's largest consumer market, she said the Asia-Pacific had a 75 percent internet penetration rate and people in the region spent an average of five hours online. She also described the region as an "innovation powerhouse", driving markets such as e-commerce, social media, and e-payments.

During a media session held at the summit, ZDNet asked how Alibaba planned to differentiate its services against US competitors --namely, AWS, Google, and Microsoft -- especially since there was a possibility the US government's increasing contempt for Huawei could spill over to other Chinese tech vendors.

While reluctant to discuss the ongoing US trade ban on Huawei, Yuan said cloud was a crucial component of Alibaba Group's economy, powering its logistics arm Cainiao Network, mobile payment platform AliPay, and e-commerce platforms, amongst others. With its cloud infrastructure capable of supporting all these businesses, including significant demand spikes during its 11.11 Shopping Festival, the Chinese vendor would have valuable know-how and technology to share with its customers, she said.

Its focus was not on the competition, but on providing the technology support and experience to ease cloud adoption for enterprises and small and mid-size businesses, she added. Pointing again to Alibaba's heritage, she said the company's focus was "in Asia, for Asia".

In addition, its product development strategy centred around three main pillars encompassing IT migration to cloud, internet-based technology, and data-driven and intelligence applications, according to Ma Jin, Alibaba Cloud's general manager of product and solution management.

Speaking to ZDNet at the sidelines of the summit. he added that businesses needed the right technology to not only migrate their existing environment to the cloud, but also to build agile architectures that could support services that were delivered through the internet.

Asked if customers had expressed concerns related to the Huawei-US debacle, Ma said Alibaba operated an open platform and was happy to answer any questions about its products.

Alibaba Cloud International's chief product officer Henry Zhang noted that security has always been an important factor, regardless of the political situation, and the vendor is focused on helping its customers secure their data. He also stressed that security should cut across all layers in the technology stack including hardware and application.

And ultimately, Zhang said, it should be a shared responsibility because businesses also had to encrypt their data before sending it to their cloud provider.

He noted that, with cloud, there often was a perception that data was less secured when, in fact, cloud security was stronger and more manageable than on-premise. Within the enterprise environment, for instance, businesses would not always know how many servers they had or whether any had been stolen. In comparison, in a cloud environment, they would know who had accessed a piece of data, how many times the data was accessed, and when access was denied.

To address concerns about security, Zhang said cloud vendors should better understand customers' needs and map a security framework for their cloud deployment.

AWS bets on services portfolio amidst increasing APAC cloud competition With cloud market players Alibaba and Google ramping up their regional data centre footprint, Amazon Web Services is relying on the "breadth and depth" of its service offerings and platform maturity to maintain its competitive edge.

He noted that several of the new products and features Alibaba announced at the summit focused on security.

Previously launched in its domestic market, these new offerings now have been made available outside of China and for the vendor's global customers. Amongst these is Bring Your Own Key, an encryption service that enables customers to deploy their own key for data transfer, compute, and storage. The feature supports ECS Cloud Disk, Object Storage Service (OSS), and Relational Database Service (RDS).

The vendor also launched its Alibaba Log Service, which lets customers automatically collect logs from their services, applications, and platforms, regardless of whether these are on-premise or in the cloud. The log data also can be tagged with context, enabling decisions to be applied to the data for analysis or alerts.

Alibaba also played up its Chinese roots at the same summit last year, when executives pitched its domestic stronghold to enterprises looking to do business in China.

According to Alibaba Cloud, the initiative aimed to tap its technological knowledge and experience to help local businesses "capture and capitalise on growth opportunities" in Asia and China. "Through the local partners in Singapore and around the region, Alibaba Cloud will provide firms of all sizes with an ind-depth immersion program on doing business in China, connecting them to Chinese companies and consumers via the Alibaba ecosystem."

While executives at the summit were reluctant to discuss the US government's treatment of Huawei, other Alibaba executives had described the ban as unfair and an attempt to curtail China's economic rise. Alibaba's executive vice chairman Joe Tsai said at a Reuters event in Hong Kong: "I think what the American government...[is] trying to do with Huawei...is a bit unfair. There's definitely a political agenda behind it.

"President Trump may have started it focusing on the trade deficit itself...but over the course of the last nine months it was blown into a bigger anti-China problem. It worries everybody."

Alibaba's founder Jack Ma also had described the US trade war on China as "most stupid thing in the world".

Malaysia rebukes US on Huawei

And while countries such as Australia and New Zealand have joined the US in banning Huawei's 5G equipment, others such as Malaysia have come out in support of the Chinese vendor.

.Malaysian Prime Minister Mahathir Mohamad said Thursday that the country would use Huawei's technology "as much as possible". "Yes, there may be some spying, but what is there to spy in Malaysia?" Mahathir said during a dialogue session at the 25th International Conference on The Future of Asia in Tokyo, where he said Malaysia was "an open book".

He urged the US government to review its relations with China, including allegations of Huawei's spying, and cautioned that failure to negotiate could lead to a military conflict.

Mahathir said: "I understand Huawei has a tremendous advantage over American technology, [but] if you want to have a situation where you are always ahead, and when you are not ahead I will ban you and send warships to your country, that is not a competition. That is threatening people and that is not the approach to use."

Chinese cloud vendor opens its second data centre in the Asean market 10 months after launching the first, pushing its global coverage to 55 availability zones across 19 regions.