I owned an aluminum Mac Pro for years and loved it until newer systems surpassed its performance using much less power and space. It was the Pro's upgradeability that kept me in the fold. I upgraded graphics cards, swapped in larger disks and later, an SSD, better optical drives, more RAM, USB 3.0, eSATA, specialized video interfaces, and RAIDed several of the internal drives for video performance.

Despite all that DIY hacking, and fully loaded with disks and PCIe cards, the Mac Pro remained a rock solid system that ran for months without rebooting. It was a true workstation. 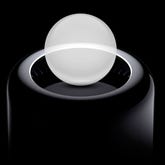 Apple's attempts at reassuring customers that it hasn't forgotten about desktop Macs hint at deep divisions within the company.

I knew the Mac Pro. And today's Mac Pro is no Mac Pro.

The fanless Power Mac G4 Cube was notorious for overheating (I know, I owned one). Early MacBook Airs had to throttle the CPU if you tried to perform serious work. Likewise some of the early alumininum iMacs.

Lately the Apple's industrial designers "tiny appliance" ethos has made all MacBooks non-upgradeable after purchase. If it weren't for USB 3.0 and Thunderbolt docks, MacBooks would have almost no flexibility at all. That said, I'm loving my top-of-the-line 2-pound MacBook, but I have an iMac, with upgraded RAM, for heavy lifting.

The one vendor who's been doing modular and upgradeable right is HP with their Z series workstations, which include towers, all-in-ones, and laptops. With them HP is specifically targeting pro Mac users. Maybe Apple noticed!

Unlike Apple's machines, all of the Z-series products are easily upgradeable, offering easy access to internals and tool less component removal. For example, the entire back of the all-in-one Z1 G3 comes off in a moment (see picture), revealing all the upgradeable components. The iMac only gives you a (well-designed!) door to access 4 memory slots.

One nifty HP add-on is the HP Z Turbo Drive Quad Pro. This PCie card has slots for 4 M.2 form factor SSDs, so you can configure it using software RAID 0 and get up to 9GB/sec read performance. That's almost fast enough for 4k VR. Here's a picture:

Of course you can also add disks and other SSDs. Compared to Apple's take-it-or-leave-it approach, the flexibility is amazing.

Industrial design is part art and part engineering. Sometimes Apple goes too hard on the art and loses track of the engineering - and the market.

With the diminutive Z2 Mini G3, HP has managed to deliver workstation-class performance in a mini-PC form factor.

But what's more surprising is that senior execs forgot what Apple used to know about the pro market. Yes, most of the business today is notebooks, and Apple is doing some great things there, but the non-mobile workstation market is very different.

High-end creatives typically invest a lot more in peripherals than the system. They buy professional interfaces and the specialized devices that attach to them. They want to add PCIe cards as needed. Often, the investment non-Apple gear will dwarf the cost of a Mac Pro, so the professional wants to extend the life of their workflow ecosystem as long as possible.

That was part of the promise of Thunderbolt: that you could add outboard PCIe slots to add capability to a notebook, iMac, or Mac Pro, and maintain and update that investment over time. With 80Gb/sec Thunderbolt coming, it's time for Apple to offer a modular system with Apple-branded Thunderbolt expansion. Once customers buy into that you've got them for years.

Courteous comments welcome, of course. No, I don't own HP stock or do work for them. I just think they did a super job with the Z series. I'm hoping Apple's team has stolen all the good ideas they can from it, and add some great new ones.