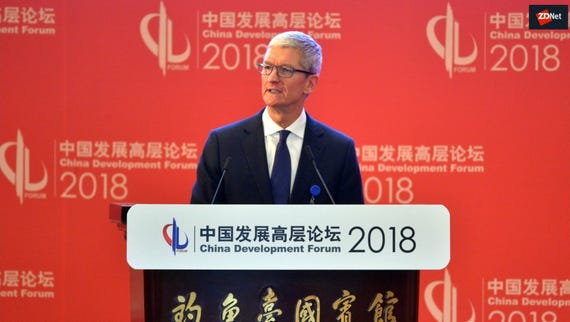 At a Beijing China Development Forum on Saturday, Cook said he supported "well-crafted regulation" when asked if the Facebook incident warranted tighter restrictions on data use, Bloomberg reports.

"This certain situation is so dire and has become so large that probably some well-crafted regulation is necessary," Cook said.

"The ability of anyone to know what you've been browsing about for years, who your contacts are, who their contacts are, things you like and dislike, and every intimate detail of your life -- from my own point of view, it shouldn't exist."

In interviews with CNN and other news sites last week, Facebook CEO Mark Zuckerberg said he wasn't sure tech companies shouldn't be regulated but left open the question of what the "right regulation" was. However, he did support more regulations on transparency of political advertising.

Facebook's shares have taken a battering since the privacy scandal came to light last week. In full-page ads on several major US and UK Sunday papers, Zuckerberg apologized for the breach of trust.

"We have a responsibility to protect your information. If we can't, we don't deserve it," the ad, signed by Zuckerberg, reads.

"You may have heard about a quiz app built by a university researcher that leaked Facebook data of millions of people in 2014. This was a breach of trust, and I'm sorry we didn't do more at the time.

The incident has also prompted many Facebook users to review apps settings.

Apple's Cook didn't offer any ideas on what well-crafted regulations would look like, but said Apple was concerned that profiling of the type conducted by Cambridge Analytica would happen.

"We've worried for a number of years that people in many countries were giving up data, probably without knowing fully what they were doing, and that these detailed profiles that were being built of them, that one day something would occur and people would be incredibly offended by what had been done without them being aware of it," Cook said.

"Unfortunately that prediction has come true more than once."

After several days of silence, the Facebook founder and CEO calls the incident a "breach of trust.