So, why would an architecture firm bother experimenting with robots? The automotive industry was revolutionized by robotics, but it's a lot harder to apply robotics to buildings.
Written by Kelly McSweeney, Contributor on Feb. 15, 2019 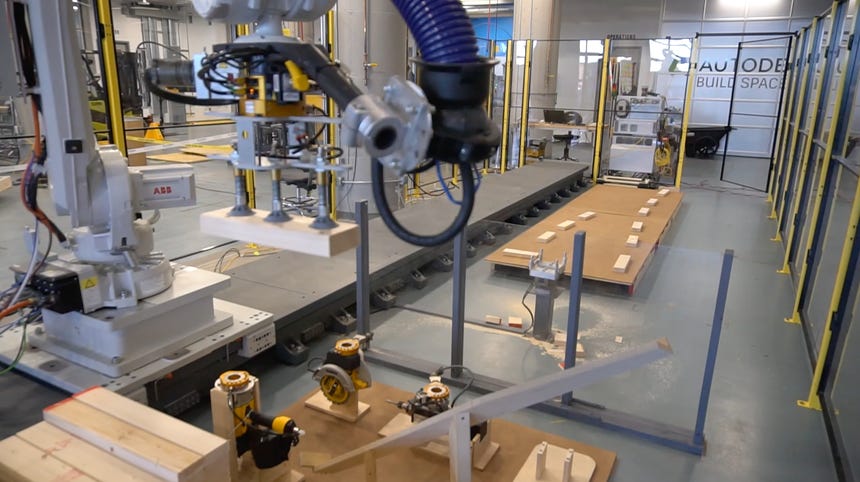 Here's a good sign that robots are moving beyond academia and into the real world: Architects are using robots to get ready for the future of construction. The automotive industry has already proven how helpful robots can be for industrial settings where they can do the heavy lifting, but construction sites are messier and always changing. Despite the challenges of a less-structured environment, the construction industry can still gain major efficiencies by introducing additive manufacturing and automation to equipment.

ABI Research reports that Autonomous Mobile Robots (AMRs) are making their way into mines and construction sites. The market research firm predicts that while in 2018, a solid 28.7 percent of commercial robots' shipments had some degree of autonomous navigation, by 2027, the percentage will be as much as 79.3 percent.

We spoke with Andy Tsay-Jacobs, who is the director of the Building Technology Lab at Perkins+Will, to get an architect's perspective on construction robots. Architecture involves creativity and design sensibility, which are some of the last skills that robots haven't mastered. But that doesn't mean that architects can just ignore the robotic revolution.

Tsay-Jacobs says, "We want to embrace that future with working relationships that are breaking the mold with how you use automation to do architecture and construction better."

Working out of the Autodesk Technology Center in Boston, Perkins + Will programmed a robot to build a 14-foot high timber pavilion in just 54 hours. If human had done it, Tsay-Jacobs says, it would have taken much longer because the nails were within just one millimeter of tolerance. The material used was mass timber, which is an engineered wood alternative to concrete and steel that is trending in the building industry.

Proponents say that it is a natural, low-carbon material that offers aesthetically-pleasing natural shapes and textures. Steel and concrete continue to be the obvious choices for strong structural materials, and they are especially promising when it comes to automated building techniques such as 3D printing (also called additive manufacturing). However, timber products can also be engineered to bear similar loads. However, using wood to make a curved design isn't easy.

So, why would an architecture firm bother experimenting with robots? The automotive industry was revolutionized by robotics, but it's a lot harder to apply robotics to buildings, especially the unique building designs that firms like Perkins + Will are hired to create.

Tsay-Jacobs explains, "We're trying to figure out how could you construct something with a robot to have it save time and money for your client, and still have it be customized by the client and not just a static photocopy." He adds, "We're interested in construction of the future and we think robots will play a role in future construction."

Mass Timber tends to be manufactured in panels and straight beams, so it's hard to make it follow curves. So, to give flexibility to wood that is normally straight, you Tsay-Jacobs used small pieces and rotate and fasten them together.

"But it's a pain in the neck to do by hand," he says. "With this pavilion we had over 2,000 individual boards that were each individually cut on the ends and nailed, and many of them were also mulled with a drill bit on the end of the robot. Doing that manually would've taken forever."

The ABB 4600 robot, equipped with suction grippers, a circular saw, a nail gun and an end mill, was able to connect 2,451 pieces of wood at precise angles. Building the pavilion took just 54 hours overall (although 800 hours of programming made this possible).

The pavilion project is just one of several ways that Perkins + Will is experimenting with robots. For example, they are also using robots to make foam models and to test processes at a small scale that contractors could later execute at full scale on a job site with an industrial robot.

"It's telling that this architecture firm bought its own robot," Tsay-Jacobs says. He adds, "We're at a time when it's not just about academia or technology centers owning robots, but even an architecture firm buying an industrial robot to test out how the future of construction will work."

Boston Dynamics: We won't weaponize our robots and neither should our customers

Boston Dynamics: We won't weaponize our robots and neither should our customers

Working from home? You can save over $1,800 on the Lenovo ThinkPad P16s

Working from home? You can save over $1,800 on the Lenovo ThinkPad P16s