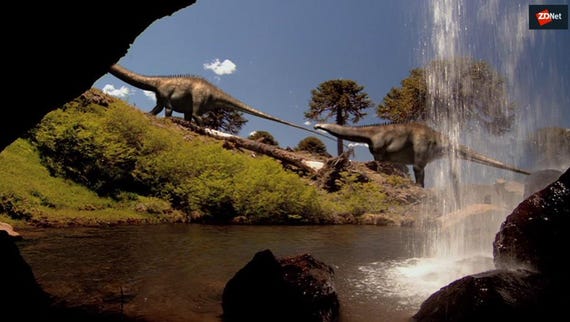 Supercomputing: Researchers simulate the extinction of the dinosaurs
Watch Now

In winning over the others, it wasn't even close. Fugaku turned in a High-Performance Linpack (HPL) result of 415.5 petaflops, besting the second-place IBM Summit system by a factor of 2.8x.

Fujitsu has been working on creating ultra-high-speed silicon since it turned from the obsolete SPARC architecture to the ARM-based A64FX. This was the first CPU to adopt ARMv8-A's Scalable Vector Extension (SVE). This is an ARM extension to its instruction set specifically for supercomputers. Fujitsu worked with ARM to develop the A64FX.

As fast as it is, in single or further reduced precision, which is used in machine learning and AI applications, Fugaku's peak performance made it the first supercomputer to break the 1,000 petaflops --  or 1 exaflop -- barrier. Fugaku is installed at the RIKEN Center for Computational Science (R-CCS) in Kobe, Japan.

AMD and Cray are working with the US Department of Energy along with Oak Ridge National Laboratory to build a supercomputer, Frontier that uses EPYC CPUs and Radeon Instinct GPUs to officially bust the exaflop wall in 2021. At this point, it appears it will be a race between Fugaku and Frontier to run faster than an exaflop.

For now, Summit -- with its Power9 CPUs and NVIDIA Tesla V100 GPUs -- is the second-fastest supercomputer. It delivers 148.8 petaflops on HPL.

At No. 3, we find Lawrence Livermore National Laboratory (LLNL)'s Sierra with 94.6 petaflops on HPL. Like Summit, it uses  Power9 CPUs and NVIDIA Tesla V100 GPUs. China's Sunway TaihuLight is No. 4, with an HPL mark of 93 petaflops. It's powered entirely by Sunway 260-core SW26010 processors. At No. 5, we find China's Tianhe-2A (Milky Way-2A), with HPL performance of 61.4 petaflops coming from a hybrid architecture combining Intel Xeon CPUs and custom-built Matrix-2000 coprocessors.

Intel's x86 architecture is the heart of only one of the top five supercomputers. But it continues to be the top processor architecture. You'll find it in 481 of the TOP500 systems. Of these, Intel claims 469, with AMD installed in 11, and Hygon in the remaining one. ARM processors are present in just four TOP500 systems, three of which use the new Fujitsu A64FX processor, with the other powered by Marvell's ThunderX2 processor. But being No. 1 counts for a lot.

China continues to dominate the TOP500 in systems, as 226 Chinese supercomputers are on the list. The US is No. 2 with 114 systems; Japan is third with 30; France has 18; and Germany claims 16. In terms of raw computing power, the US edges out China in aggregate list performance, with 644 petaflops to 565 petaflops. Small-but-powerful Japan, despite its much smaller system count, delivers an aggregate 530 petaflops.

As you'd expect from that breakdown, Chinese manufacturers dominate the list: Lenovo (180), Sugon (68), and Inspur (64) account for 312 of the 500 installed systems. Of US vendors, HPE claims 37 systems, while Cray/HPE has 35 systems. Fujitsu is represented by just 13 systems, but thanks to Fugaku win, the company leads the list in aggregate performance with 478 petaflops. Lenovo took second in performance with 355 petaflops.

Finally, as has been true since 2017, all 500 of the world's fastest supercomputers run Linux. When it comes to high-performance, it's a Linux world.

Join Discussion for: ARM and Linux take the supercomputer TOP500...