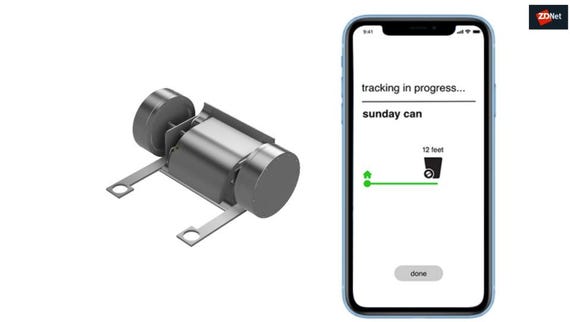 Taking out the garbage? This self-driving can will do it for you
Watch Now

Your home can never be smart enough.

Every last element of it has so much potential.

These days, I'm sure you look around at all the inanimate parts of your house and bemoan how little they help you in your everyday life. Simultaneously, you dream of their potential.

If only your walls could truly talk. If only your coffee table could carry dirty crockery to the dishwasher.

And if only your garbage can could roll itself out to the curb on the appropriate day, so that you could free your mind of yet one more burden.

May I therefore lighten your load?

You see, my eyes have just descended on a new creation called the SmartCan. This, according to its makers -- a company called Rezzi -- "eliminates the need to take a homeowner's garbage can to the curb by providing a plug-and-play motorized trashcan attachment and mobile application."

I can feel your salivation from this long distance. After all, the SmartCan won the Protolabs Cool Idea Award.

Truly this is exactly what the internet of things should be about. Ordinary household objects doing their thing without you having to lift so much as a finger.

Well, that's not quite right. I assume you have to lift a finger toward your phone in order to program this divine object.

Once that's done, however, please imagine the sheer glee on knowing that your garbage can will be electronically prodded to roll itself out in order to be emptied.

In my household this would be a glorious addition. Our garbage truck arrives early on Monday morning.

The mere thought that neither my wife nor I would have to wheel it out is adorable. (Currently, it's impossible to do the night before because the local raccoons have a very high IQ, so one of us has to do it before dawn.)

All we'd have to do it program our SmartCan and it would be the epitome of Can-Do. Or SmartCan-Do.

I fear, though, there may be one or two logistical issues.

The video on the SmartCan site appears to show the can wheeling itself out and then stopping in a docking station. I'm not sure all local councils would allow those to be perched on the curb.

Moreover, many people keep their trash cans in the garage or behind a gate. There'd have to be some more complex internet of things maneuvering for the trash can to, say, open the garage, leave it and then close it again.

If it could, however, that would certainly startle the raccoons -- and one or two neighbors who happened to be out walking their dogs.

What could be more helpful than garbage cans that do their own dirty work? And why hasn't Elon Musk already marketed one of these things?

The future looks wonderful after all.

Join Discussion for: At last! A self-driving garbage can