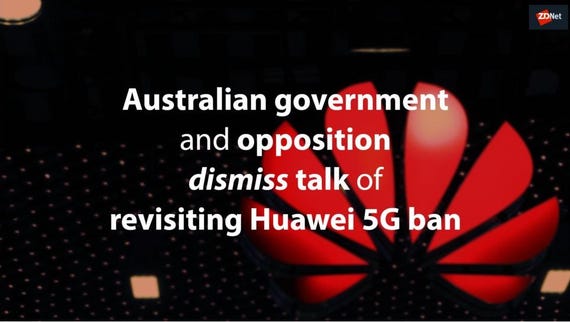 Home Affairs Minister Peter Dutton has dismissed talk of revisiting the ban slapped on Huawei that prevents it from supplying 5G equipment in Australia, in the face of the UK allowing Huawei into part of its 5G network earlier this week.

Speaking on the Today Show on Friday morning, Dutton said it is not in the best interests of Australia to have its telco networks compromised, and responded to a question asking to revisit the ban with a simple, "No, we're not".

"They are a high risk vendor. We have been very clear about it," Dutton said.

In October 2018, then-director-general of ASD Mike Burgess said the reason behind the ban was the shrinking distinction between edge and core networks in 5G compared to previous generations.

"That means that a potential threat anywhere in the network will be a threat to the whole network," Burgess said at the time.

"At the end of this process, my advice was to exclude high-risk vendors [namely Huawei and ZTE] from the entirety of evolving 5G networks."

In its decision made earlier this week, the United Kingdom will not allow Huawei in the core, and the Chinese company's radio equipment will be restricted to only 35% of its network. Additionally, Huawei equipment will not be used at sensitive locations such as nuclear sites and military bases.

"The government is certain that these measures, taken together, will allow us to mitigate the potential risk posed by the supply chain and to combat the range of threats, whether cybercriminals, or state-sponsored attacks," the UK decision said.

Huawei Australia, unsurprisingly, jumped on the UK decision to continue its campaign to have its ban overturned.

Joining Dutton on Friday morning was Labor deputy leader and Shadow Minister for Defence Richard Marles, who was similarly asked if the Huawei ban should be re-examined.

"It is the right decision," he responded.

"It's not a question of saying, Huawei is doing bad things at the moment? The real question is, not looking for a smoking gun, but asking whether this is a loaded gun, and whether you want to have that risk," Turnbull told the BBC.

Turnbull added it was a question of whether a nation wanted to give China the ability to interfere with "one of the most fundamental technological platform forms of your modern economy" in the form of 5G and the Internet of Things.

The issue is actually not so much a question of interception," he said. "Because increasingly end-to-end encryption means that data that can be intercepted can't be read."