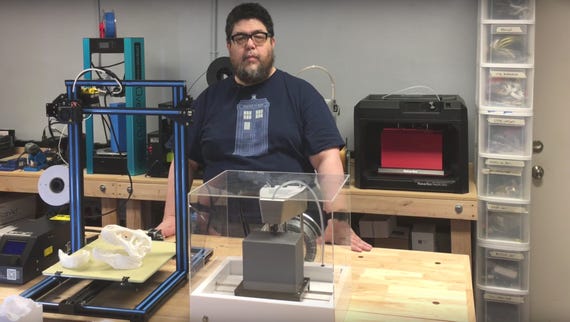 Inexpensive CR-10 and MOD-t 3D printers in education: Which is better for you?
Watch Now

Today's column is a little science project and a little show and tell. The key takeaway is that 3D printers have become so inexpensive that they're affordable for individual students to own and use.

In the video associated with this article, you can see two inexpensive printers. The first is the Creality CR-10. This is a monster printer at a very affordable price, ranging from about $350 to about $440, depending on whether it's on sale or if you can find a coupon. This one was sent to me by the nice folks at GearBest, who regularly run sales.

UPDATE: As soon as this article posted, GearBest reached out with a coupon code. If you use GBCR10J the price will drop to $396.99. Always nice to save a few bucks.

The second is one you're likely to be familiar with from my previous article. It's the New Matter MOD-t. When they sent me this last year, it was listed at $399, but it's now available for sale directly from New Matter for $269.

The CR-10, though, is a lot more fiddly. You have to assemble it, although that's relatively easy. You attach the gantry, plug in the various cables, and then level the bed, which is a tedious (but relatively simple process) of just turning some thumb wheels until paper slides evenly under the print head. All told, including the leveling process, assembly and tuning took me a little under two hours.

As I showed in my unboxing, the MOD-t comes fully assembled. Of particular importance is the fish tank-like clear plastic shell around the print area. If you want to buy a 3D printer for your younger children, this may be the one for you. The plastic shell means your kids can watch the printer print, but you don't have to worry that they'll reach inside and possibly burn themselves. It also keeps the noise down.

Print heads on 3D printers are often in the 190-220 Celsius range, which is 374-428 degrees Fahrenheit -- in other words: hot. The bed on the CR-10 is also heated, which makes the printer far more versatile, but at 60 degrees C or 140 degrees Fahrenheit, it's also quite toasty.

If you have young kids around, you probably don't want the CR-10. The potential for small hands getting burned is pretty high. On the other hand, if you have children of high school age, or you're in college, the CR-10 is going to be the far better choice.

You can print much larger items on the CR-10. I didn't have time to print anything super-large for this column, but the video shows T-Rex jaws that would just never fit into the build area for the MOD-t. Neither would a set of mountain range prints I produced.

The jaws showcase some of the amazing educational projects you can do with a 3D printer. I downloaded this model from Thingiverse for free, and it cost about a dollar's worth of filament to print. It's one thing to see a picture of a T-Rex skull in a book or on TV, or even see one in a museum. But to be able to look at it in your own hands provides a much more kinesthetic experience.

Thingiverse is an amazing resource for students and educators. There's an education section which spotlights some awesome projects and 3D printable models, all for free. Check it out.

The two mountain ranges I mentioned earlier are another interesting project for 3D printing. The lower range contains Mount Rainier, a 14,410 foot peak.

The higher range model contains Mount Everest in Asia. It's the world's highest mountain, at 29,029 feet above sea level. What makes these two models interesting isn't just the terrain features, but that they model the height of the base terrain above sea level.

This is a great way to learn geography, geology, and Earth history, all with hands-on models that allow you to get a really good feel for the difference between the two regions.

I printed these as smaller squares, just to get them done in time for the accompanying video. But the CR-10 has so much capacity that you could print these quite a bit bigger, and use them as demonstration models in front of a classroom.

Beyond size, there are other differences between these two printers. Because it doesn't have a heated bed, the MOD-t can only handle PLA. That's a very versatile filament, but if you want more exotic filaments, the more robust ABS, flexible filaments, and more, you'll want to use the CR-10 with its heated bed.

I could not print a set of hominid jaws on the MOD-t. They replicate the Homo Naledi jaw found in the Rising Star Cave near Johannesburg, South Africa. The fossil replica was from a hominid, an extinct pre-humanoid species that lived between 335,000 and 236,000 years ago.

The MOD-t does all its slicing (converting to layer-style printing) in the cloud. It just completely borked on many of the more complex models I tried to send it. On the other hand, when I put the Homo Naledi jaw model in Cura (which is a free slicer that works with the CR-10), it output G-code quickly, and as you can see in the video, the model produced on the CR-10 is gorgeous.

While the MOD-t is cheaper, safer for smaller hands, and requires less futzing than the CR-10, its quality is not that great. I tried printing a puzzle from the MOD-t store and in my first try, it printed with the bottom layer mis-aligned and in the second try, it had some pretty obvious layer separation. That was after the New Matter slicer simply died on my attempts to upload more complex images.

Most of the objects I've talked about are models, and with the exception of the gray blocks, they were all printed on the CR-10.

But 3D printers are great for more than just printing models. They're very useful for printing tools and resources for students as well. I put a bunch of tools on the CR-10 to print in a single batch. I printed a test tube rack, and two holders for Arduino bench testing, all at the same time.

The finished test tube holder did have to be glued together, but it works. I made a single-bay bumper case that supports an Arduino Uno, and a dual-bay holder that manages both an Arduino and an associated breadboard.

Using a 3D printer, you can print some very fine and delicate objects, like the very thin, plastic separator in the Arduino shell.

Before I printed the shell, I looked closely at the 3D printed model. I realized that pulling it off the build plate might cause it to crack, so I used Simplify3D to lay out the objects and put rafts under each one. Then, when I printed the set, I was able to be more rough about removing them from the build plate because they were protected by the raft. Then, I could separate the raft gently, and get my final result. As the video shows, it all worked quite well.

I've been working with 3D printers now for almost two years and they still astound me. You can imagine what you can do with printers like this for all kinds of engineering, science, and even robotics projects. They have application in medical study, geology, geography, history, math, and so much more.

It's an exciting time for students and educators. The availability of these inexpensive printers opens amazing opportunities for hands-on exploration and discovery.

That's it for today. Go forth and build something great!

Join Discussion for: Back to school: We test inexpensive 3D printers...