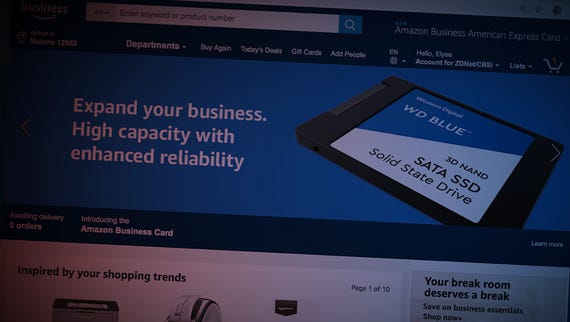 Create a free Amazon Business account and get a 30-day free trial to Business Prime.

Whether you're looking to buy a fleet of laptops for your team or a single ultrabook you can take on the go, you'll want a robust business laptop that offers more than what you can get from a consumer notebook. Power, security, durability, and a premium typing experience are must-haves, and luckily for you, we've found the perfect systems that tick off all those boxes. The best part is you can get them all on Amazon Business.

Also: What is Amazon Business and how does it work?

Note: Some of the items below may be eligible for special discount pricing on Amazon Business if purchased in large quantities.

Given its low price tag for a basic Windows laptop, it's no wonder that the Aspire 5 Slim is the most popular notebook on sale through Amazon Business. To drop its price point to near Chromebook levels, Acer eschews Intel's Core processors for an AMD Ryzen 3 chip and provides minimal RAM (4GB) and storage (128GB SSD). You do get a full HD 15.6-inch display at least, but the Slim defaults to Windows 10 in S mode, which limits you to apps from the Microsoft Store and the Edge browser in the name of extending your computing time between charges. (You can switch to the full version of Windows 10 for free, however.)

A solid, traditional clamshell 13.3-inch laptop, the X390 offers the ThinkPad features business buyers have depended on for years: great keyboard, TrackPoint center button, all-day battery life, and an array of security options. In her review, ZDNet's Sandra Vogel concludes that the X390 is "a solidly built small-format laptop that frequent travelers should find easy to carry."

While not as cheap as some of its earlier notebooks, Chuwi's AeroBook still comes in well under the price of most Windows laptops but isn't shy about its MacBook-inspired design. With its 13.3-inch form factor and 256GB solid-state drive, the AeroBook is more about lightweight on-the-go productivity than powerhouse performance, especially given its outdated Intel Core m3-6Y30 processor. Nonetheless, ZDNet's Alun Taylor says that the AeroBook is "is a great looker, well made, well-specified, and performs faultlessly."

Chromebooks haven't been nearly as successful in disrupting the business market as they have in education, but they still offer an affordable alternative for those who mostly make use of web-based applications rather than traditional Windows desktop software. HP keeps the price down on its Chromebook 14A by using a plastic chassis and including a low-res display and a mere 20GB of built-in storage, but compensates with ruggedized construction, solid keyboard, and 9-hour battery life. As Vogel points out in her review, "it does the job it's meant to do very well — at an attractive price."

Microsoft hasn't always succeeded with its forays into hardware (remember the Zune?), but it's certainly hit with its Surface brand. While the Surface Pro tablet can be used as a convertible device with the addition of a type cover, the company realized that a dedicated notebook could appeal to business customers as well. Now on its second iteration, the Surface Laptop 2 gets a speed bump with eight-generation Intel Core processors and double the RAM of its predecessor. It retains the 13.5-inch touchscreen display and manages to weigh just 2.8 pounds.

Not every business notebook is used in a coworking space or on a coast-to-coast flight. Dell's Latitude 5420 is built for harsher conditions, able to withstand knocks, drops, and bumps thanks to its magnesium alloy case, eight bumpers, and water and dust resistance (meeting MIL-STD 810G and IP52 durability standards). You pay for that tough construction rather than robust specs -- the base model includes an older Core i3 processor -- though you do get a full HD 14-inch screen and an additional bay for a second battery. While our review refers to the 5420 as "a competent rugged laptop," sometimes that's just what you need to get the job done.

If you want to go upscale with a business-oriented Chromebook instead of the more budget-conscious HP Chromebook 14A, Acer's convertible notebook may be your best bet. It's packed with a 13.5-inch 2,256x1,504 touchscreen display, Intel Core i3 processor, 8GB of RAM and a 64GB solid-state drive. The Spin 13 even includes a stylus to use to write or draw when you choose to be in tablet mode. Even if it's well above the price of most Chromebooks, our review argues that "it's hard to deny the sheer value for money offered by devices such as the Spin 13."

A year ago, ZDNet experts were debating whether Apple was still worried about professional users of its Mac computers, but the latest 15-inch MacBook Pro update should assuage some concerns about that. By upgrading to ninth-generation Intel Core processors -- including eight-core Core i9 CPUs -- and more powerful AMD Radeon Pro graphics, Apple is giving the creative professionals who support the brand a major performance boost. There's a hefty price to pay, but then again, that's always the case with Apple. It doesn't dissuade ZDNet's Cliff Joseph from concluding that "thankfully, it's...powerful enough to justify that price and ensure that it earns its keep when you're on the road."