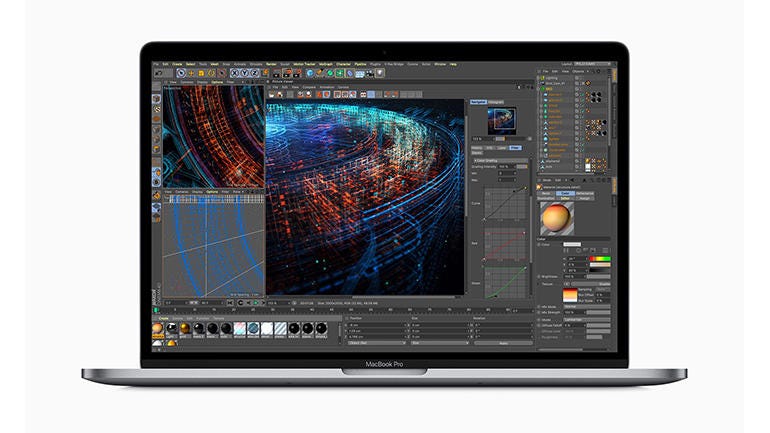 With iPhone sales slowing, Apple is continuing to refresh and extend the Mac product line, with the long-awaited announcement of the brand-new Mac Pro taking the limelight at Apple's recent Worldwide Developer Conference (WWDC). And, in recent weeks, there's also been a veritable flurry of updates for its laptop line-up as well.

The ultraportable MacBook has been discontinued altogether -- seemingly unmourned by either Apple or its users. The entry-level version of the 13-inch MacBook Pro got an overhaul, and a price rise, so to make up for that Apple has also cut the price of the MacBook Air, confirming its position as Apple's 'affordable' laptop for students (although, of course, the term 'affordable' is somewhat relative when talking about Apple products).

Almost lost in the blizzard of press releases, was the announcement of an 8-core update to the 15-inch MacBook Pro, which, according to Apple, makes it the most powerful laptop the company has ever released.

The basic design of the 15-inch MacBook Pro hasn't changed much since the revamp that introduced the Touch Bar in 2016, and the new 2019 edition still looks virtually identical to its predecessors. Measuring just 15.5mm thick and weighing 1.83kg, the MacBook Pro is admirably slim and light for a laptop with a large 15.4-inch display. The Retina display itself is also unchanged, offering admirable clarity and brightness with 2,880 by 1,800 resolution (220dpi) and support for the DCI-P3 colour-space used for professional video-editing (although there are rumours of a 16-inch model planned for later this year).

Connectivity still relies on four Thunderbolt 3/USB-C ports -- two on each side of the laptop -- which require an endless collection of adapters in order to use existing peripherals. The 'butterfly' keyboard is still there as well – although it now seems that, at long last, Apple has recognised the error of its ways with this design and may be reverting to a more traditional 'scissor' mechanism for future keyboards.

So this 2019 update is, essentially, a 'speed-bump' -- albeit, a fairly significant speed-bump that introduces a new top-of-the-range 8-core CPU and enhanced graphics performance, as Apple continues to woo professional users, who have felt rather neglected in recent years.

This year's starting price is slightly higher for users in the UK, now costing £1,999.17 (ex. VAT; £2,399 inc. VAT), although the US price is unchanged at $2,399. This entry-level model offers only a modest speed-bump, though, with a 9th generation, 6-core Core i7 processor running at 2.6GHz, with the same memory, storage and GPU as its predecessor.

Both of these standard configurations can be further upgraded with an 8-core Core i9 processor running at 2.4GHz (Turbo Boost to 5.0GHz), but the main upgrade options actually come from the Radeon Pro Vega 16 and Vega 20 graphics cards that are also available.

As always, Apple offers some rather expensive memory and storage upgrades, with the maximum 32GB of RAM and 4TB SSD bringing the final all-inclusive price to a hefty £4,467.27 (ex. VAT; £4,914 inc. VAT, or $5,149.99). These prices are significantly lower than last year's comparable top-of-the-range customisation options, and it often seems as though Apple's most expensive products actually offer the best value for money, while their so-called 'entry-level' models can often seem overpriced.

The price rises for UK customers will be disappointing, but the performance of the updated 15-inch MacBook Pro should satisfy even demanding professional users. Admittedly, the step up from 6- to 8-cores doesn't make a major difference to raw processor performance, with single-core performance in Geekbench 4 only rising modestly from 5,600 to 5,816 compared to last year's model. Multi-core performance shows a larger increase, though, rising from 24,586 to 30,780 -- and, of course, the 8-core processor will excel with demanding tasks such as editing multiple streams of video.

But, as you might expect, it's the upgraded GPU that shows the greatest improvement, with a Cinebench R15 score of 145fps representing a 35% increase over last year's 105fps. The more demanding Unigine Valley graphics test produces a score of 34.5fps, which is one of the best scores we've seen from any laptop. We've seen stronger graphics performance from similarly priced desktop systems -- including a Valley score of 54.8fps from the recent update of Apple's own iMac -- although these obviously sacrifice portability for performance. So if you're looking for a lightweight laptop that can provide heavyweight graphics performance, then the new MacBook Pro is a tempting proposition for professional users.

And while Apple is a bit vague about the laptop's mains-free longevity, referring only to 'all-day battery life', you should indeed be able to get a full day's work out of it as well. The graphics-switching option found in the macOS Preferences panel allows the MacBook Pro to revert to the integrated Intel UHD 630 GPU for less demanding tasks, and we were able to get just over nine hours when streaming video from the BBC iPlayer -- a 30-minute increase over last year's model. If you're editing 4K video on a plane flight across the Atlantic then you'll exhaust the battery more quickly, but the 15-inch MacBook Pro is more than a match for most high-end laptops that offer discrete graphics cards.

It's somewhat redundant to point out that the 15-inch MacBook Pro is seriously expensive, as that's simply par for the course with Apple. But, thankfully, it's also powerful enough to justify that price and ensure that it earns its keep when you're on the road. And, as always, the slimline and lightweight design of the MacBook Pro is in a class of its own, combining portability and power in a way that few of its high-end laptop rivals can match.

What would Steve Jobs think of the today's Apple?