Building a YouTube studio: Upgrading to full broadcast quality video for under $3,000

We take a look at how adding a Blackmagic Design cinema-grade camera and ATEM switcher can increase production values in a small studio.
Written by David Gewirtz, Senior Contributing Editor on June 15, 2021 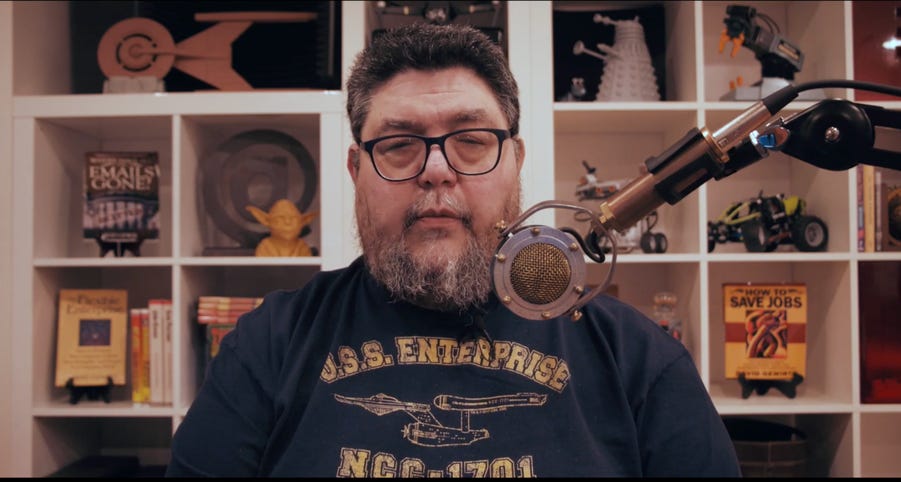 Let's put this project into context. Over the past year, many of us have become all to familiar with webcam-based conferencing. We've even become familiar with the homes of news anchors and TV stars as programs normally broadcast from a studio have been streamed from spare bedrooms, attics, and basements across the world.

The pandemic lockdown will leave a legacy of increased remote working, so it's a good time to upgrade your webcam. Here are ten leading contenders.

Higher resolution webcams like the two hundred dollar Logitech BRIO even capture video at 4K. But even though some webcams have 4K cameras, many home broadband connections can't handle upstreaming at that speed. Many can't even handle 1080p.

The gotcha is that while you can replace your webcam, you're generally stuck with whatever broadband provider is in your community. You may be able to purchase more bandwidth if the network connection to your house can handle it, but if your area doesn't have high capacity pipes, you're stuck with what's in the ground.

But what if you need to do broadcast quality interviews or roundtables? You need to be able to stream so the participants can interact. But if your pipes won't pump the high-resolution video in real-time, what do you do?

This article and the accompanying video is part of our YouTube Studio Project series. In this installment, we're going way beyond YouTube quality. I'm going to be upgrading my talking head studio from its webcam roots to what can legitimately be called cinema-grade.

I won't say this is an inexpensive project, but it's generally within the budgets of most small businesses. I'm going to use about $3,000 worth of video gear -- gear that just a few years ago would have cost 10 to 50 times that amount.

Let's start with the problem statement: the problem I had to solve. I've done hundreds of in-studio and streamed video interviews. In fact, my office was set up to do just that. But last month, one of ZDNet's clients asked me to appear as a subject matter expert. This wasn't unusual, since that's a big part of my job.

What was unusual was that the client wanted true broadcast quality video. They were not content with what could be captured through Zoom or what even a high-quality webcam could produce. They wanted original, raw video from a cinema-grade camera, and they wanted it as part of a Zoom conversation.

Their plan was to dispatch camera crews in the homes of the host and the two subject matter experts, and those crews would both record local super high quality video and stream to sustain the conversation. Then later, in post production, editors would cut together the three pure raw cuts into a final video.

The idea of a full camera crew lugging gear and traipsing through our house did not sit well with either my wife or me. And, besides, I already have a couple of dedicated studio spaces. Why not simply upgrade this one to meet the broadcast level requirements of the client?

And that's what I did. In the next few minutes and in the accompanying video, I'll show you how.

Upgrading the studio from its webcam roots

To meet the production requirements, I had to be able to stream 1080p video to Zoom while simultaneously recording 4K RAW (or better) video locally. The stream would allow the speakers to speak to each other, but the editors would use the RAW video for their production work.

I also had to capture a high-quality, lossless version of only my side of the conversation. All of these files would be uploaded immediately after the shoot was done.

I had a starting point. I already had broadcast-quality sound. My mic is a gorgeous handmade Ear Trumpet Labs Edwina. I've loved it ever since Ear Trumpet Labs sent it to me. It's popular among performers and sound engineers. Other elements of the sound system include the Mackie ProFX8 mixer and the Focusrite Scarlett 2i2 interface.

I also had a cinema-grade camera, the Blackmagic Design Pocket Cinema Camera 6K. I reviewed it last year, mostly for the ability to capture 6K and use it for super-tight zooms in post production.

I decided to pull it off the shelf and press it into service as the camera for this special video. The BMPCC 6K is capable of 6K video and Blackmagic RAW is a format capable of very flexible and super high-quality color grading.

Before I get started talking about how I used it and the Blackmagic ATEM Mini, I need to give a shout out to Blackmagic Design. When this project hit my to-do list, I reached out to the press relations team I worked with last year. Those folks spent hours with me working out the best approach for this, walked me through setup, and even answered some panicked questions the weekend before the shoot. So huge thanks the the Blackmagic team.

I purchased two upgrades for the camera: a cage and a Samsung T5 SSD. The cage made it easier to mount the camera on my tripod and behind the teleprompter, and also had a custom bracket to hold the SSD.

My quick release adapter system worked just as well here as in the shop studio. I have quick releases on the tripod, the teleprompter, and on the Blackmagic camera cage.

Also: Building a YouTube studio: Battle of the quick-release adapters

The Samsung T5 SSD was one of Blackmagic's approved drives because it was fast enough to record the enormous quantity of video as it was generated.

I picked up a 1TB model which was enough for more than three hours of recording at 12:1 compression and 5.7K, which was the format I settled on for this project. This is clearly a popular SSD for this camera, because the cage has an adapter designed to fit it. The way the drive slides smoothly into the adapter is very satisfying.

A USB-C connector from the drive to the camera completed this part of the solution.

I ran an HDMI cable from the camera to the ATEM Mini Pro. The ATEM Mini Pro converted the camera's output to something Zoom (and other programs) would think came from a webcam. This is a very powerful capability of the ATEM Mini, because the Mini allows a ton of production and switching work to occur, all of which is piped to Zoom as if it came from a basic webcam.

I also had an Ethernet connection to the ATEM Mini. This allowed me to use the ATEM control on my Mac to color correct the camera's RAW output on the fly. It also has a focus button which triggers the camera's autofocus, so my face-for-radio was in focus, blemishes and all.

Finally, I had a USB connection from the ATEM Mini Pro. This allowed me to feed the color-corrected video right into Zoom's webcam interface.

I also used two iPads in this solution. One iPad connected to the camera and controlled exposure on the fly. This was important, because when it's daylight, I want to lower the ISO, but when it's night, I want to increase the ISO. Since I need to see how the exposure changes my face, I have to be in front of the camera, not behind it.

By moving the controls to the iPad, my face can be in camera and I can control the settings. The Blackmagic camera control iPad app also allows me to start and stop recording, again so I can stay on set and control the camera.

The only thing I found odd was that the focus button was in the ATEM control application on the computer, while ISO and record controls were on the iPad app.

My second iPad was used to maintain sightline to the other guests. By using a virtual screen app (in this case, Screens) I connected into my Mac and mirrored the Zoom call that was on my Mac's screen onto the iPad. That iPad was placed inside the teleprompter.

Now, I could look at and talk to the other guests by looking straight into the camera. Sure, you can do all that without the teleprompter, but I'm not an actor by nature and find it very hard to maintain sightline without looking at the person I'm talking to.

For sound, we settled on two recordings. For some reason, the Monitor Send output of the Mixer just would not record on the Blackmagic camera. So I sent the headphone monitor output to the camera. That gave the camera not only my track, but all the speakers.

To be able to provide a single track with just my voice, I used Audio Hijack on my Mac. This program does all sorts of audio routing magic, and in this case, it captured the audio signal destined for input to Zoom and recorded that isolated channel to a file.

It all worked and I completed the event. When you watch the accompanying video, you can see the difference between the webcam and the cinema camera setup. On the left is a video recorded in an earlier interview, using the BRIO webcam. On the right is the video recorded here with the Blackmagic camera.

What do you think of the difference? Have you needed to upgrade your home broadcast studio to keep up with improved production quality? Do you do YouTube or conference video professionally? Let us know in the comments below.