On paper, what Anthony Terry found when he took up the post of IT director at UK law firm Napthens could hardly have been more state of the art: an outsourced, cloud environment with an IT infrastructure hosted offsite.

Yet within nine months he had brought the infrastructure back inhouse and within a year had shifted the business's 250 end users to a totally virtualised server and desktop environment.

"Obviously, I'm not anti-cloud and I'm not against it in any way. But it was purely that when you come down to the number crunching — given the number of users we had — we really wanted to look at using some best-of-breed technologies in terms of NetApp, VMware and Citrix," Terry said.

"When we were actually looking at the costs, we felt that over a three-year period it was a much more economical figure to insource it rather than to go to another provider. It certainly worked for us financially to do that," he said.

Another big factor behind the change was the level of downtime that dogged the IT arrangements he had inherited.

"We were going down once or twice a week for a good few hours a day. It got the point that I went in and quizzed the data centre managers: 'What's going on? How can this be?'. Then an awful lot more came out of the woodwork," Terry said.

"There wasn't this fantastic disaster-recovery plan available that we had bought into."

That discovery compounded nagging doubts among lawyers in the firm about the security of sensitive legal documents and data.

"Before we even went into the cloud there was some apprehension within the business: 'Look, what happens to the data?' I feel pretty uncomfortable with the whole dilemma of not having the data ourselves to manage. My predecessor had tried to overcome those obstacles but ultimately we did end up pulling it back inhouse," Terry said.

"Before we even went into the cloud there was some apprehension within the business: 'Look, what happens to the data?' I feel pretty uncomfortable with the whole dilemma of not having the data ourselves to manage."

— Anthony Terry, Director of IT, Napthens

"We do use Mimecast as a cloud-based email system. So we have got a blend. We have some onsite and offsite servers as well in terms of our disaster recovery, for example. We put that in another office with live replication that takes place throughout the day, and then it's obviously backed up to tape each evening."

The firm's partners were far happier with the new disaster-recovery provisions and backup routines, along with the improved performance of a virtualised infrastructure based on servers running VMware's ESXi 5.0 hypervisor, NetApp storage arrays , and Citrix XenApp 6.5 delivering applications to the end users' Dell Wyse C90LEW thin clients.

"I specifically went out of my way to say, 'Look, what we're striving to achieve here is performance, reliability, availability. Also, while we're doing all this, we're looking at the modernisation of an awful lot of the applications that are used within the estate as well'," Terry said.

The downtime problems that seemed inherent in the previous arrangements evaporated, with Mimecast's outage in mid-May providing the only blemish on an otherwise spotless record.

"We're now saying that when Mimecast lost their data centre, that's the only downtime we've had in two years. When you're looking at three hours downtime in two years, it's a pretty good statistic, isn't it — as opposed to about 40 percent? And thankfully that wasn't even down to our infrastructure" he said. 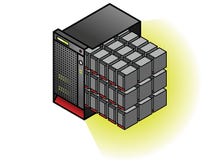 The shift of the infrastructure inhouse to a private cloud also allowed Napthens to update its switching system to voice-over-IP telephony with click-to-dial and presence functionality, and implement a mobile printing system that replaced about 65 printers with 16 multifunction devices across its four sites.

With the virtualised environment now in place, with obvious benefits for mobile working, Terry this year turned his attention to applications that would add value to the business and the rollout of Eclipse's Proclaim practice and case management system.

According to Terry, one of the other real benefits of virtualisation is the ability to perform real-time maintenance tasks without taking systems offline.

"When we implemented our new case management system, there was a requirement to put more memory into each of the hosts to ramp up capacity. We were able to do that without any disruption to the business. So it's things like that where we've seen massive benefits," he said.

But Terry is clear that while it's tempting to see the benefits of virtualisation in IT terms, the real impact is on the ability of end users to do their job.

"Besides all the selfish things from an IT perspective —  centralised desktop management and ease of management generally — what I really want to see from a Citrix environment is the end user having a better experience than from an actual machine on the desk," Terry said.

"That's what we've set out to achieve, and I genuinely believe that they do get that — and most importantly get that consistently, day in day out. In Citrix environments I've used elsewhere they've been somewhat sluggish. People have got used to that, but then all of a sudden you say, 'Well, actually we've really vamped this up. We've really modernised it'," he said.

"We've had various specialists involved in terms of really tweaking and optimising the environment."

Over the next 12 to 18 months, Terry says the inhouse development team will be focusing on customising the Proclaim practice and case management system. He's also interested in taking a serious look at moving away from Citrix XenApp and going to Citrix XenDesktop.

"The reason we didn't go down a XenDesktop route at the time we went live with the infrastructure was because some of our legal applications weren't supported under XenDesktop. However, they are now," Terry said.

That change would allow users to play more media-rich content and enable the firm to do more video content internally for training and also look at integrating video conferencing with the telephony system.

The fully virtualised server and desktop environment gives Terry the freedom to consider other options for the future.

"Now that we are fully virtualised with a virtualised desktop also, it gives us that flexibility to say, maybe in a couple of years' time, do we actually want to continue with the hardware refresh internally? Do we want to farm this out into the cloud?" Terry said.

"We're there now to make that decision, whereas before there was no real benchmark. We literally lifted and shifted what was there previously into the cloud and it just wasn't done properly."