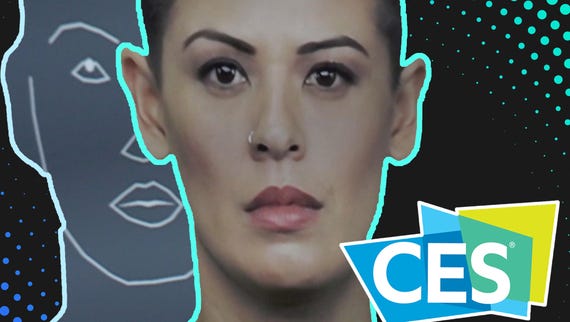 After much social media teasing in the form of mystifying short videos and Tweets hinting towards "artificial humans", Samsung's research subsidiary STAR Labs unveiled its latest project, dubbed Neon, at the Consumer Electronics Show (CES) in Las Vegas. And the technology is somewhere between creepy and visionary.

Neon produces photo-realistic digital avatars that can respond with human emotions and intelligence in real time. Although they are computer-generated, Neons look, act, and learn like real people – so much, in fact, that the company says on its website that the avatars are "beyond our normal perception to distinguish" from reality.

Essentially, Neons look as real as characters in a film, except they interact with us and are virtual creations instead of actors.

So, what can they do? Don't expect to "hey, Neon" in the same way that you would with Siri or Alexa. Samsung already has Bixby for a personal assistant, and Neon has made it crystal clear that its artificial humans are something else entirely: "Contrary to some news, Neon is NOT about Bixby, or anything you have seen before," said the company in a Tweet.

Instead, Neons will be called Frank, Natasha or Hana, and they will be your air steward, teacher, doctor, personal trainer, or even the anchor presenting the news on TV; the idea is to assign the avatars with specific tasks that require human communication, and weave the Neons into the real world.

Less detail was shared about the specific way that this new species will be brought to life. The avatars will be powered by a technology called Core R3, which stands for "reality", "realtime" and "responsive", and, according to the company, lets Neons react in less than a few milliseconds.

Neon said that Core R3's neural networks were "extensively trained with how humans look, behave and interact", and were "inspired by the rhythmic complexities of nature". The technology is still being perfected, and Neon said it plans to beta launch the avatars later this year with certain partners.

Samsung has ramped up its efforts to develop artificial intelligence in the past few years, vowing in 2018 to invest $22 billion in AI and 5G by 2020. Although most of the company's focus has revolved around Bixby, Neon is a different take on the technology, and one that is separate from personal assistance.

Although the new project has received a lot of attention due to careful hyping up, especially from STAR Labs' CEO Pranav Mistry, the Samsung subsidiary is not the first company to look into the technologies that can power digital avatars.

Facebook, for example, is pioneering a project called Codec Avatars that will let people create virtual avatars of themselves to use when they connect to someone else in virtual reality. The digital representation will mimic the user as they speak, so that it looks like they are right in front of their interlocutor.

Although Codec Avatars are not smart nor responsive, Facebook faces similar challenges to Neon in developing photo-realistic technology. And even the social media giant has confessed that it is not quite there yet: "there's a lot of work to do, and several remaining challenges to solve, before lifelike avatars are ready for prime time," it said.