The number of Canadians known to be detained by China since December has quadrupled, as China's top prosecutor says one pair have "without a doubt" violated the law.
Written by Chris Duckett, Contributor on Jan. 3, 2019 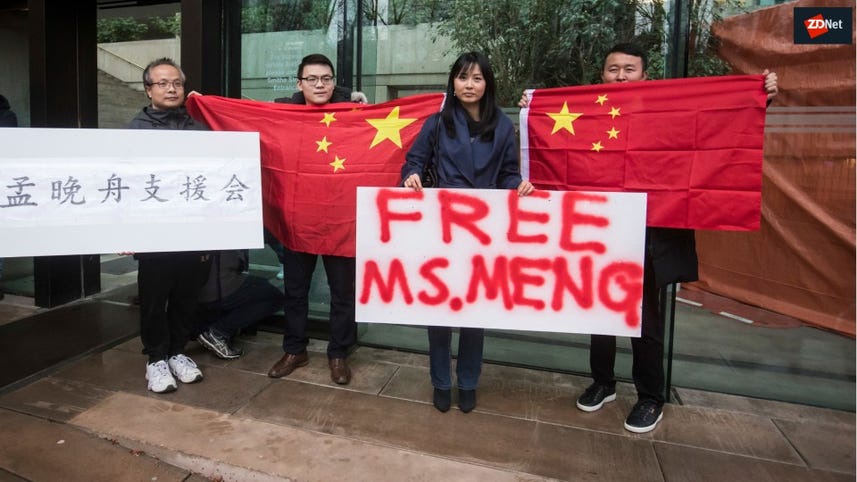 Since the December 1 arrest in Vancouver of Huawei chief financial officer Meng Wanzhou, the number of Canadians known to be detained by China has more than quadrupled, with Global Affairs Canada confirming the number has risen to thirteen, The Globe and Mail reported on Thursday.

Global Affairs Canada said all had been detained in mainland China and at least eight have been released.

However the report also added that the overall number of Canadians detained in the Middle Kingdom has remained steady for a number of years.

The Huawei CFO, who is also the company's founder's daughter, is accused by the United States of misleading multinational banks about Iran-linked transactions, putting the banks at risk of violating US sanctions. She was released on bail in Vancouver, where she owns two homes, while waiting to learn if she will be extradited to the United States. She is due in court on February 6, 2019.

Last month, then-Huawei Chairman Ken Hu said any evidence against the company should be revealed.

"Huawei has never and will never present a security threat," he wrote. "We will hold ourselves to the highest standards, placing cyber security and privacy protection at the very top of our agenda."

Last week, Reuters reported United States President Donald Trump was considering an executive order to declare a national emergency that would bar US companies from using telecommunications equipment made by China's Huawei and ZTE.

Two Canadians detained by China had "without a doubt" violated the law, China's top prosecutor says.

Authorities in Beijing had previously said the two men, Michael Kovrig, a former diplomat and an adviser with the International Crisis Group (ICG) think-tank, and businessman Michael Spavor, were suspected of endangering state security.

"Without a doubt, these two Canadian citizens in China violated our country's laws and regulations, and are currently undergoing investigation according to procedure," Zhang Jun, China's prosecutor general, said on Thursday.

Zhang said the investigation process had been handled "strictly" according to law when asked by Reuters at a briefing when the two men might be charged. He did not elaborate.

Canada has said several times it saw no explicit link between the arrest of Meng, the daughter of Huawei's founder, and the detentions of Kovrig and Spavor.

But Beijing-based Western diplomats and former Canadian diplomats have said they have no doubt the cases are linked.

Canada has said the detentions are unacceptable and US Secretary of State Mike Pompeo has said China should free the men.

China touts the rule of law, but its judicial system is tightly controlled by the ruling Communist Party.