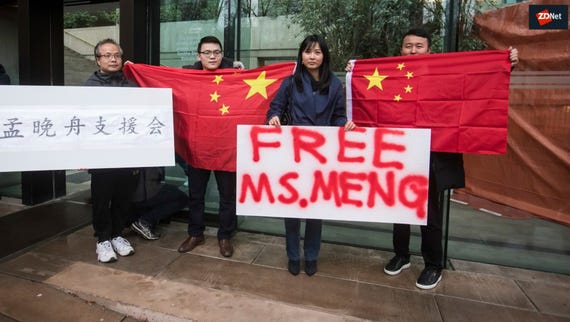 Canadian Prime Minister Justin Trudeau has urged caution and said he will not be "stomping on a table" after China detained a third Canadian amid a diplomatic dispute over the arrest of a Chinese technology executive.

The detentions of the Canadians -- including one revealed on Wednesday -- followed the December 1 arrest in Vancouver of Meng Wanzhou, chief financial officer of the Chinese telecommunications giant Huawei Technologies.

The arrest was made at the request of the United States, which is engaged in a trade war with China.

Trudeau has been under pressure to take a more robust stand on the detentions but said at a news conference: "Political posturing or political statements aren't necessarily going to contribute. They might actually hinder Canadians' release. We're going to take every situation carefully and seriously.

"Canadians understand that even though political posturing might be satisfactory in the short term to make yourself ... feel like you're stomping on a table and doing something significant, it may not directly contribute to the outcome we all want, which is for these Canadians to come home safely."

Trudeau said he was asking China for more information on the detentions. No details have been given on the latest, but Trudeau said it was "a very separate case" from last week when former Canadian diplomat Michael Kovrig and businessman Michael Spavor were detained amid the diplomatic quarrel triggered by Meng's arrest.

Huawei is the world's biggest supplier of telecoms network equipment and second-biggest smartphone seller. The United States has been looking, since at least 2016, into whether Huawei shipped US-origin products to Iran and other countries in violation of US export and sanctions laws, Reuters reported in April.

The Canadian government has said several times it saw no explicit link between the arrest of Meng, the daughter of Huawei's founder, and the detentions of Kovrig and Spavor. But Beijing-based Western diplomats and former Canadian diplomats have said they believe the detentions were a "tit-for-tat" reprisal by China.

Bob Rae, Canada's special envoy to Myanmar and a former Liberal Party leader, tweeted on Wednesday that "there are no coincidences" and said the detentions look "too much like hostage taking".

An official at the Chinese Embassy in Ottawa said the embassy had no information to release on the issue.

Meng is accused by the United States of misleading multinational banks about Iran-linked transactions, putting the banks at risk of violating US sanctions. She was released on bail in Vancouver, where she owns two homes, while waiting to learn if she will be extradited to the United States. She is due in court on February 6, 2019.

US President Donald Trump told Reuters last week he might intervene in the case if it will serve national security interests or help close a trade deal with China.

The comments upset Canada, which warned the United States against politicising extradition cases.

Trudeau said a decision on whether to use Huawei equipment in Canada's 5G mobile network should be made by experts and not influenced by politics.

Earlier this week, Huawei Chairman Ken Hu said any evidence against the company should be revealed.

Hu said the approach taken in those decisions were irresponsible.

"There must be evidence or proof to support these decisions. If there is no evidence, I think any decision of this nature would not win the test of time," he said.

"Even worse, the time for people to adopt and use 5G technology would be delayed."

The Huawei chair said there is no law in China that requires mandatory installations of backdoors into equipment.

"Just like the US and Australia, China also has certain legal requirements for counter terrorism or cybersecurity objectives," Hu said.

"China also specially emphasises that all government institutions or agencies must enforce the law according to the law. There are clear definitions."

Australia recently passed new encryption laws, which many pundits believe will make Australian companies be viewed in the same negative light as Huawei.

"The comparison is absurd. High-risk vendors have been banned from Australia's 5G network because of the threat they pose when they could be subject to unbounded extrajudicial directions from a foreign government," Burgess said.

On concerns that Australian companies will be forced offshore to avoid the laws, Burgess said the proposition is flawed.

On similar reasoning, Burgess advised Canberra to extend its Huawei ban to 5G, saying in October that the stakes surrounding 5G could not be higher.

"The distinction between core and edge collapses in 5G networks. That means that a potential threat anywhere in the network will be a threat to the whole network," he said at the time.

For his part, Hu said on Tuesday that Huawei has signed over 25 commercial 5G contracts, and has shipped more than 10,000 base stations.

Join Discussion for: Third Canadian detained in China amid Huawei...