The relaunch implements new rules that limit when female passengers can use the car-pooling service, which has sparked controversy among users.
Written by Cyrus Lee on Nov. 6, 2019 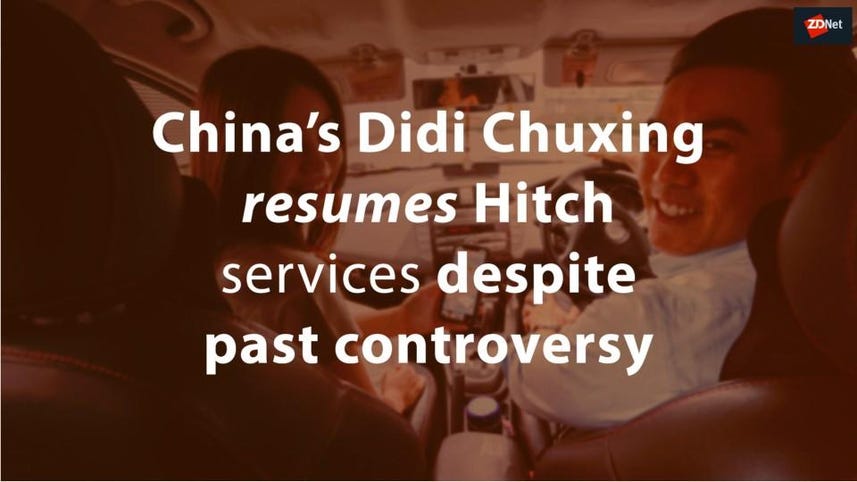 China's leading ride-hailing platform Didi Chuxing has launched a retrial of its Hitch car-pooling service in several cities, despite the services having been halted for more than a year following the deaths of two passengers.

The once popular car-pooling service, which allows drivers on the Didi platform to pick up various users traveling to a similar destination, will initially be retrialled again in seven Chinese cities including Beijing, Taiyuan, and Nantong from November 20, the Chinese company announced on Wednesday.

Didi suspended the popular carpooling service in late August 2018 after a female user of the service was raped and killed by her driver when using the service on the platform. This was the second death incident arising from the Hitch service in less than 100 days.

The Beijing-based company, which is also one of the most valuable unicorn startups in China, tried to introduce several new safety measures following the deaths, including a whole-ride recording function to strengthen its reputation among users, before it was eventually shut down.

As part of the retrial later this month, Didi will implement a new rule that limits service time for women passengers, which has sparked controversy in the country as many users consider the rule to be discriminatory.

While the newly launched trial will be restricted to trips under 50 kilometres and within metro areas in the seven cities, female users will only be allowed to use the Hitch service between 5am and 8pm, which differs from male users who will be able to use the hitch ride until 11pm.

Responding to users' criticisms on social media platforms like Sina Weibo, Didi said the car-pooling trial is only a part of Hitch's relaunch and the company would continue to seek from the public.

"The official launch plan of the Hitch service in the future will be continually improved based on the feedback from all parties in society," Didi said in a statement.

In February 2019, several mainland reports said Didi, which owns around 80% of ride-sharing market had made the decision to lay off around 2,000 staff, or 15% of its entire workforce after it reportedly experienced losses of 10.9 billion yuan in 2018 -- this was much worse than the 2.5 billion yuan loss from the year prior.

The shutdown of its Hitch service was considered one of the major reasons for the huge revenue decrease within the company.