The move expands the service collaboration agreement that was previously agreed to by the two companies.
Written by Aimee Chanthadavong on July 24, 2019 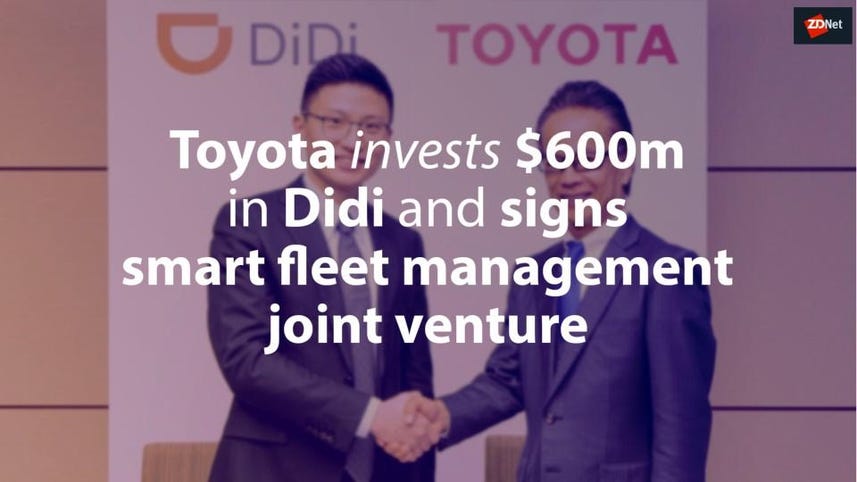 Toyota has invested $600 million in Chinese car-hailing platform Didi Chuxing as part of an expanded Mobility-as-a-Service collaboration agreement the two companies have in place in China.

Toyota invested a handsome $500 million in Uber last August to jointly develop self-driving vehicle technologies as part of a wider partnership between the two companies.

Earlier this year, Didi, which owns around 80 percent of ride-sharing market in China, announced it would lay off around 2,000 staff, or 15% of its entire workforce this year.

Critical flaw in Palo Alto VPN solution impacts Uber, other enterprises may be at risk

Updated: The critical vulnerability exists in old, vulnerable versions of the software still in use by companies including Uber.

Uber Air flying taxi service to be trialled in Melbourne

Telstra, Macquarie, Westfield-operator Scentre Group, and Melbourne Airport to help the Silicon Valley darling launch a third Uber Air pilot city and the first outside of the United States.

The closer the distribution center, the faster the delivery. Why not look underfoot?

Ride-hailing wars: Why Uber, Cabify are facing a Spanish backlash

While Barcelona's MWC hyped the latest in transportation tech, scenes on its streets told a different story.