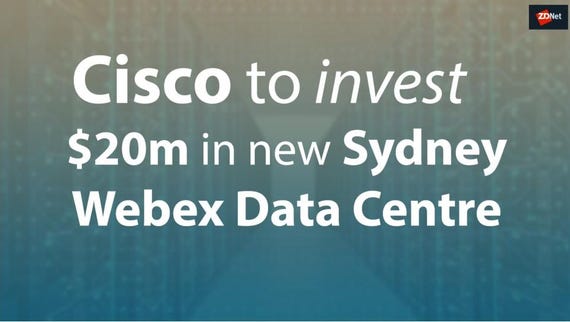 Cisco has announced that it will be investing $20 million in a new Webex Data Center in Sydney.

According to Webex VP and GM Javed Khan, Australia is one of the biggest users worldwide of Cisco's collaboration suite, with more than 230 million Webex meeting minutes and over 12 million Webex Meeting participants during 2018.

Across the nation, around 2.5 million business users are running Cisco Cloud Calling platforms; and several of the largest Cisco cloud-connected video deployments globally are in Australia.

The world's largest deployment of Cisco's Webex Boards is also in Australia, Khan said at Cisco Live 2019 in Melbourne.

The networking giant's success down under saw Cisco Australia's net profit rise from AU$30.2 million to AU$32 million in FY18.

This was despite a slight drop in revenue, from AU$1.87 billion in FY17 down to AU$1.85 billion in FY18. Of this, Cisco Australia made AU$1.13 billion from the sale of goods, and AU$410.1 million from professional services.

During the financial year, Cisco Australia had moved into the small and medium-sized business (SMB) market segment, and announced in July the launch of its Cisco Start portfolio following 18 months of trials in Australia.

"Enterprise-class technology that's reliable, that's simple, and that's secure. The way the portfolio is designed, it takes into account the scalability that a small business needs as they grow. So the platform grows as they grow, and we've built flexible consumption models for SMBs to alleviate any of the cash-flow concerns that small businesses usually have."

Disclosure: Corinne Reichert travelled to Cisco Live 2019 in Melbourne as a guest of Cisco