Whether a survivalist's taste of what's to come or a hobbyist's delight, 3D printing food at home is now possible.
Written by Greg Nichols, Contributor on Oct. 29, 2020 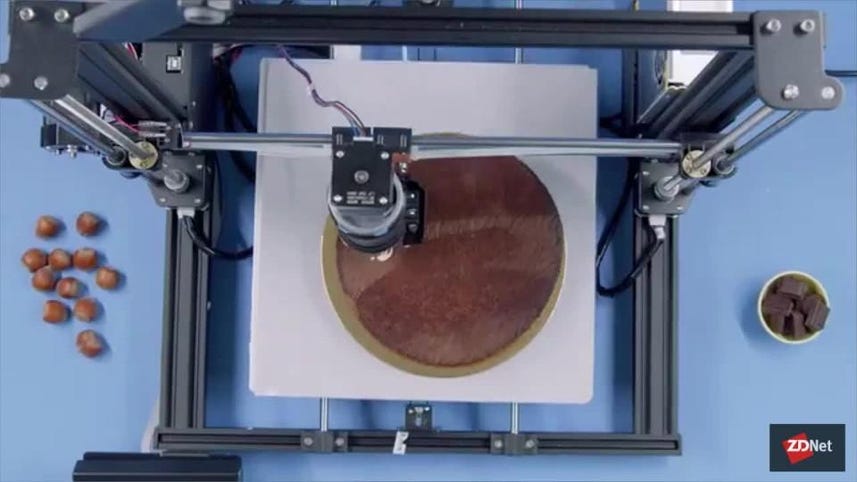 It's a sci-fi trope and a technology that's been seriously explored for space exploration, but so far 3d-printed food is little more than a novelty. A company whose founder has deep roots in 3d printing is setting out to change that with a bolt-on kit that converts home 3d printers with food-grade equipment to create food.

Cakewalk3d was founded by Marine Coré-Baillais, former director of 3d printing company Sculpteo. The project began with a question: What if 3d printers could do more? In 2019, 1.4 million 3d printers sold in 2019 worldwide, which creates an alluring hardware base for an add-on technology.

So what kind of food will Cakewalk3d's technology enable the masses to print? Cake, of course. And what better way to appeal to bored makers looking for new ways to use their printers?

Cakewalk3d offers a food-grade extruder that fits directly on many popular 3d printers. Support parts to attach the extruder can be printed on any standard printer with accompanying CAD files.

Culinary-grade printers do exist, but they're largely confined to commercial kitchens or the province of DIY tinkerers. Cakewalk3d democratizes 3d-printed dessert technology. About a hundred models exist in the company's library, which enables users to create various flavor profiles and cake structures, including sweet, salty, and vegan preparations.

The company is positioning the product for amateur and professional home chefs and cake designers as a way to accelerate design and creation. It could also impact the way recipes and techniques are traded and iterated. Much as open source libraries enable mass distribution of 3d printing plans, Cakewalk3d may succeed in creating a techie community of cake designers who push the art and science of desserts forward.

Google
How to connect a PlayStation 4 controller to your iPhone