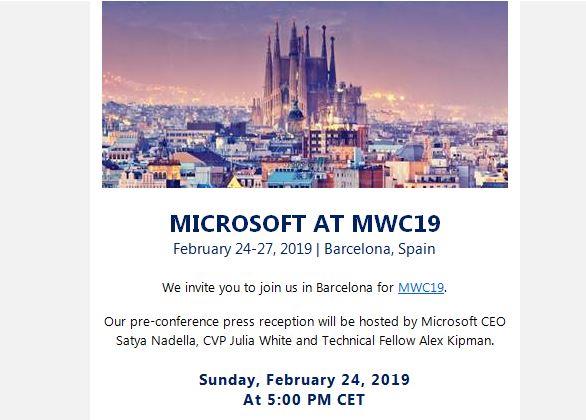 There's been speculation for a couple of months about when and where Microsoft will debut its next-generation HoloLens device. A January 16 invitation to a Microsoft press conference at Mobile World Congress (MWC) in Barcelona in late February is fueling the rumors further.

Many of us Microsoft watchers believe Microsoft will introduce its new HoloLens mixed-reality device in 2019. Microsoft officials already confirmed that the next HoloLens will feature a custom AI coprocessor, enabling the devices to run AI workloads "at the edge." The next HoloLens also will include the same sensor that is in the Project Kinect for Azure depth-sensor kit that Microsoft unveiled at Build 2018. The CPU in the next HoloLens is believed to be a Qualcomm's Snapdragon 850 mobile processor.

Alex Kipman, the father of the HoloLens who is currently Technical Fellow for AI Perception and Mixed Reality in the Cloud and AI Group at Microsoft, is going to be speaking at Microsoft's MWC press conference on Sunday February 24. He will be joined by Microsoft CEO Satya Nadella and Corporate Vice President of Azure, Julia White. (White may be on hand to make sure that Microsoft's "intelligent cloud/intelligent edge" messaging gets through as part of the announcement.)

Kipman was made head of the AI Perception & Mixed Reality Services team as part of Microsoft's big reorganization in March 2018. That team oversees all Microsoft's speech, vision, mixed reality, and other perception capabilities, and is charged with building first-party experiences and cloud services for third parties on Azure. Kipman and team work closely with Harry Shum on all things AI related.

Microsoft increasingly has been pushing the HoloLens as a business-focused device, and has introduced a few new business-centric applications for the device, including a hands-free video-calling app called Remote Assist and Microsoft Layout for creating 3D space designs.

I asked Microsoft whether the company will show off the next HoloLens at MWC 2019. No word back yet (and not expecting them to confirm this).