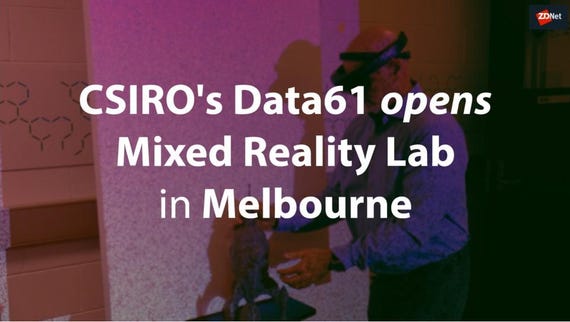 The Commonwealth Scientific and Industrial Research Organisation's (CSIRO) Data61 has launched its Mixed Reality Lab in Melbourne, which was designed to help industries such as manufacturing, health, agriculture, mining, and urban planning create digital copies of physical objects, systems, and people to automatically validate a component or process.

"We could be inspecting parts that could reduce delays downstream and do it in a cost-effective way very quickly," he told ZDNet.

As part of developing the lab, which has been 18 months in the making, Bolger said Data61 has been working with Swimming Australia and Diving Australia for biomechanical modelling to help athletes improve their performance and reduce injuries.

Earlier this year, Data61 launched a 600-square metre Robotics Innovation Centre in Queensland that is dedicated to research and development of robotics and autonomous systems.

The research centre will be used to develop robotics systems that can interact safely with humans in both indoor and outdoor environments, according to Data61 Robotics and Autonomous Systems group leader Fred Pauling.

Since Data61's inception in July 2016, the CSIRO's technology arm has completed at least 317 research projects and flagged an additional 364 projects as being in progress as of December.

Turner is stepping down to set up a new venture after four years with Australia's innovation arm.

The system developed for the Australian Federal Police has garnered the interest of other government entities, including the Department of Home Affairs and NSW Police.

The tool uses statistical machine learning to hopefully prevent the spread of infectious diseases in Australia.