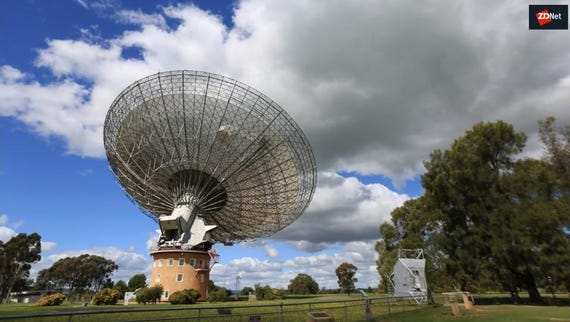 Just over 50 years ago, the Parkes radio telescope, owned and operated by the Commonwealth Scientific and Industrial Research Organisation (CSIRO), supported the National Aeronautics and Space Administration's (NASA) with the first mission to the Moon.

Under the agreement, the dish will provide ground station support to Intuitive Machines, including for their first flight under NASA's Commercial Lunar Payload Services (CLPS) initiative that will see it launch its Nova-C Moon lander on a SpaceX Falcon 9 rocket scheduled for later this year.

According to CSIRO, the flight will deliver commercial cargo and five NASA experiments to investigate the local geography and test technology that may be required for future human exploration.

"Along with NASA's Honeysuckle Creek station near Canberra, the Parkes radio telescope helped share the Apollo 11 Moon landing with more than 600 million people around the world. And now we are proud to support the first companies extending their reach to the Moon's surface, advancing knowledge that can benefit life both on Earth and, one day, on the Moon," CSIRO acting chief scientist Dr Sarah Pearce said.

"Australia is growing a vibrant and respected space industry, underpinned by world-class national infrastructure and a long history in enabling space exploration. This is another example of Australian capability supporting the international space community."

See also: 6 space missions to look forward to in 2021 (TechRepublic)

In other space news, the Australian government has granted South Australian-based Southern Launch the country's first launch facility licence. This will allow the company's Koonibba Test Range in regional South Australia to become a launchpad for future commercial launches of suborbital rockets.

"Southern Launch is absolutely thrilled to be the first company to hold an Australian launch facility licence, allowing the facility to be used for future space launches out across the Australian desert," Southern Launch CEO Lloyd Damp said.

"The Koonibba Test Range will have a significant benefit to the Koonibba community and the broader regional centre of Ceduna, including the opportunity for ongoing local employment, education and the development of a new space tourism industry," My Damp said.

"It also positions Australia one step closer to once again being a space-faring nation."

An inquiry into developing Australia's space industry is currently underway. Chaired by Nationals MP Barnaby Joyce, the committee is examining the opportunities of Australia's space industry and what is required to support the country's domestic and international space-related activities. This includes the development of space technology and equipment, commercialisation of R&D, and future workforce requirements.

Currently, surgeons and radiologists are required to develop pre-operative plans using manual segmentation, which involves identifying and marking the vertebrae of every single CT slice, of which there can be hundreds.

However, according to Singular Health, the AI model that has been developed using the company's MedVR and 3DicomViewer software to allow surgeons to not only visualise the spine in 3D, but also manipulate individual vertebrae in 2 minutes. Segmented spinal vertebrae are also editable by radiologist and surgeons to ensure accuracy, the company added.

During the development process, CSIRO used a dataset of more than 200 CT scans of labelled data, while Singular Health procured the dataset.

"The use of artificial intelligence in medical imaging, and more specifically radiology, has the ability to profoundly change the workflow for radiologists," Singular Health innovation executive director Dr Guan Tay said.

"With around 45,000 Australians undergoing spinal surgery every year, the rapid segmentation will save thousands of hours for radiologists and surgeons who will only have to make small mark-ups and/or validate the segmentation as opposed to manual segmentation slice-by-slice."

As next steps, Singular Health said the AI model would be further tested before it is considered for commercial release.

MORE SPACE NEWS FROM DOWN UNDER