It won't win any beauty contests, but the Dell Latitude 7330 Rugged Extreme is still charming nonetheless.
Written by Chris Duckett on April 13, 2022 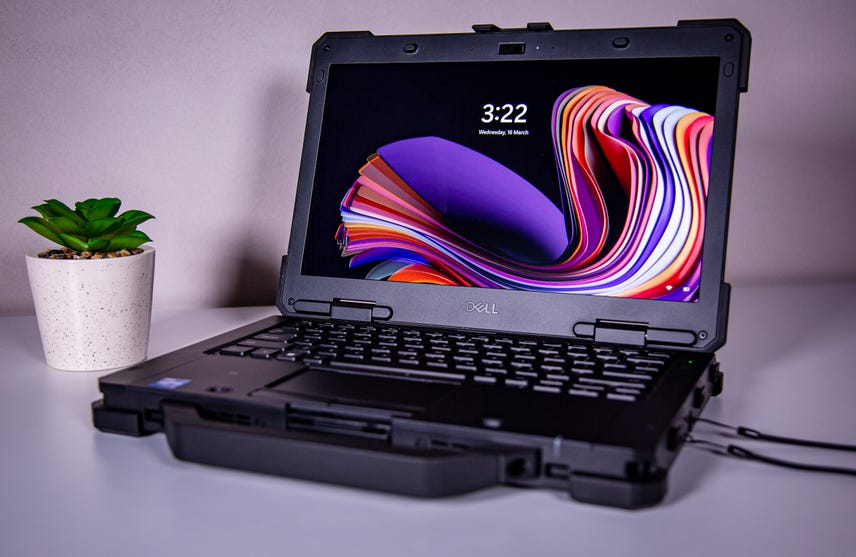 When approaching the Dell Latitude 7330 Rugged Extreme, it's best to rewind your mind by a decade or two.

This is not a laptop whose makers obsessed over thin bezels and millimeters of thickness down to two decimal places -- this laptop is made tough and proud of it -- but more so it uses ideas that have long since fallen out of popularity with laptops, such as hot-swappable batteries, and an ability for customers to replace some parts themselves.

Of course, the first thing that one notices with this laptop is its ruggedness. Rated at IP65, this means it should be dust-tight and able to handle low-pressure water jets. Dell claims it has the "maximum protection against dust, dirt and water ingress," however, the IP Code does have five higher levels for water protection. The company also states the laptop can withstand temperatures from "–20°F to 145°F", which to the rest of the world means almost -29°C to a mere 63°C, and drops from 6 feet, or 1.8 meters.

That low maximum temperature does leave lingering questions over how it would handle environments like a Western Australian mine while being in direct sunlight for an hour in the middle of summer.

Thanks to being dust-tight, the ports on this laptop are hidden behind seven lockable doors. Behind these doors are a smart card reader, microSD card reader, SIM slot to power the 5G-capable mobile connection, 2 Thunderbolt 4 ports, 3 USB-A ports, headphone jack, RS-232 Serial port, HDMI port, and an RJ45 port.

The laptop also has a stylus to use on its touch screen, which supposedly appears when you press down on it, but for the life of me, I could not get this piece of equipment out of its housing. Probably a good thing as I would be more likely to use the functionality that allows touch screen use with gloves rather than use a stylus in a state of anger.

One other immediately noticeable part of this laptop is the handle -- this is a work device and can be carried like a work device.

Most impressive in the modern age when laptop users are not meant to pull things apart are the screws that litter the outside of the laptop and a pair of hot-swappable batteries -- the idea of taking a six-pack of batteries out on site is far more attractive than needing to find a power outlet in the middle of nowhere.

Once you notice a few Phillips head screws, it's clear that this is a laptop that owners can actually do repairs themselves -- so long as you have a Torx T8 screwdriver, plastic scribe, and 5.5mm socket wrench. Dell has a great number of instructions on component replacement in its manual.

Replacing the SSD drive is as simple as opening a hatch on its back, removing a couple of screws, and dropping in the new SSD before reversing the extraction process. Users can also remove and replace the port doors, handle, keyboard, touchpad, back cover, card reader, fan, heat sink, and other motherboard components like the Wi-Fi card, speakers, and GPS board, as well as the motherboard itself, and even the display.

Good luck ever seeing these sorts of instructions arrive with your next MacBook or Surface.

This is how laptops used to be, a sizable 2.32kg package that is on the chunky side, with plenty of bezels, and an ability to replace many, many parts of the laptop yourself.

It's a little bit of nostalgia packed with 11th generation Intel silicon, support for up to 32GB of memory, 2TB of storage, and 5G connectivity.

However, once you kit out the machine to its highest specs, like this review unit, the recommended retail price for this machine is almost $9,500. There's a very good reason why Australia Dell's site has a "call for pricing" label rather than a dollar figure.

Cue the record scratch, and enter the disappointment that a machine approaching 10 grand only has the option of one Full HD screen, albeit with increased outdoor viewability.

This is a great machine that is positively charming to those who remember when corporations issued desktop computers as standard. From its design, features, sticker price, and gatekeeping behind the Dell sales team in certain places, it's clear this isn't a consumer device. And if Dell's rugged durability claims do not hold, for that price you can be guaranteed IT admins will be screaming bloody murder at their local sales rep.