The Optiflex 7070 Ultra answers a question you didn't know you asked. Namely, is there a place in between an all-in-one and a regular desktop?
Written by Chris Duckett on Jan. 16, 2020 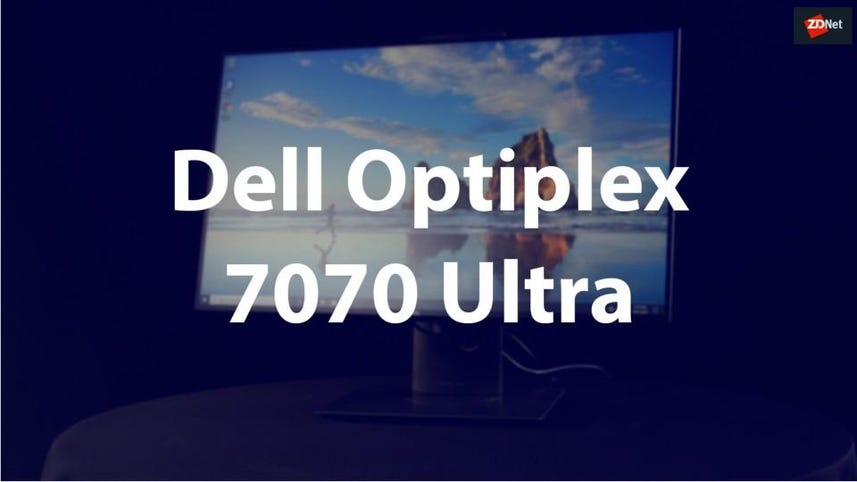 If you've ever wanted to deploy something like all-in-one desktops throughout your organisation and have them be easily upgradeable, then the Optiplex 7070 Ultra could be the ticket -- so long as you have a large cheque book to play with.

The Optiplex 7070 Ultra is a half-kilogram thin brick that has dimensions of 25.6 centimetres by 9.6 centimetres by 2.8 centimetres, and packs the sort of silicon that one expects in a business laptop: For Australia it has an 8th-generation Intel Core i5 or i7 processor, 8GB or 16GB of memory, and 256GB or 512GB of NVMe solid state storage that can be added to with a second SSD up to 1TB or 2TB with a hard disk drive. Other options are available on other geographies. Non-discounted pricing for the unit alone begins at AU$2,465.

The main trick with the Optiplex 7070 Ultra, and the reason it is designed as a thin brick, is that it fits in a specially designed monitor stand that attaches to Dell monitors. This feature is touted as being a desktop space saver, which it certainly is, but do not think that it is a cableless affair.

We tested this Optiplex with a Dell UltraSharp 24 USB-C monitor -- which is a serviceable, thin-bezel 1920x1080 monitor that retails for AU$340, and if it had a high resolution, it would be outstanding -- and found the Optiplex to be a half-way house between a regular desktop and an all-in-one.

For instance, a USB-C cable was still needed to make the connection between the unit and the monitor, both devices needed their own power cables and bricks, and connecting headphones meant reaching behind the monitor to find the audio jack and hoping they lack enough lead to allow you to relax in your seat.

Consolidating things like power connections would put it much closer to the realm of an all-in-one, while probably making it increasingly complex, but simple changes like adding reachable ports and audio jacks into the stand to face the user would help with everyday usability.

After publication, Dell pointed out the Optiplex can be powered solely with the USB-C connection. Which is especially interesting because this unit originally had an under-performing power brick that left the unit's CPU restricted to operating at 400MHz, and despite having an alternate source of power available, the Optiplex never used it. Guess it is easy to work out the preference order on power connections. This experience should also speak to the discoverability of the feature.

In Dell's perfect world, its customers would be upgrading monitors and Optiplex units separately -- otherwise the decision to go with one of its OptiPlex 7770 All-in-One machines or external GPU.

Alternatively, for the old school users out there, it's possible to buy a regular boxy Optiplex 7070 and still have some change left over.

If you cast your mind back a number of years, PC makers and Intel were really trying to push the idea of a wireless desktop, where everything from input to display would be handled wirelessly. The Optiplex 7070 Ultra would be absolutely perfect in that world, but it's not the one we live in.

The Optiplex 7070 Ultra occupies the space between an all-in-one and a traditional desktop, and while the concept is sound, in practice it doesn't have enough of a wow factor to make people change their ways.

Innovation
A business tried to use a 50% price hike as a recruitment tool. It didn't go well

Business
How to land a tech role at Microsoft