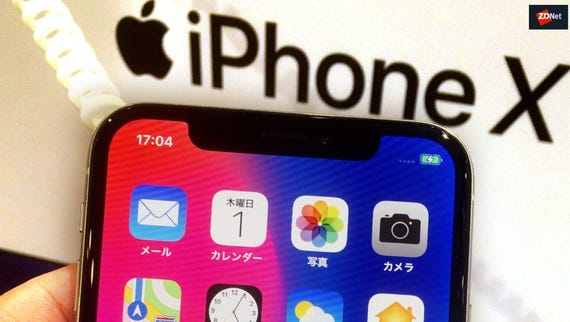 Is the smartphone finally running out of steam? Despite an array of new flagship smartphones touting bigger screens, biometric security, and digital assistants, sales of smartphones dipped dramatically in the last three months of the year and were at best flat for the whole of 2017.

According to data from analyst group IDC, smartphone makers shipped 403.5 million devices in the fourth quarter of 2017 -- down a significant 6.3 percent on the 430.7 million units shipped in the final quarter of 2016.

In the whole of 2017, 1.472 billion smartphones were shipped, down by less than one percent on the 1.473 billion devices shipped in 2016, but still the first annual drop since the market began its rapid rise five years ago.

Part of the problem is that the market is increasingly saturated -- there just aren't that many new smartphone customers to find. And -- just as bad for vendors -- consumers are mostly happy with the smartphones they've got and aren't being persuaded to upgrade by the new features on offer. This may hit flagship devices harder because many mid-range devices now contain most of the features that users actually want, without the premium price tag.

IDC said that developed markets such as China and the US both saw a drop in demand during the last three months of last year as consumers were in no rush to upgrade to the newest generation of higher-priced flagship devices.

"The latest flock of posh flagships may have had consumers hitting the pause button in the holiday quarter," said Anthony Scarsella, mobile phones research manager at IDC. "With ultra-high-end flagships all the rage in 2017, many of these new bezel-less wonders proved to be more of a luxury than a necessity among upgraders."

While smartphone makers have been pushing even bigger displays, sophisticated biometrics, and artificial intelligence, the new and higher price points are putting buyers off.

The market is also consolidating into a set of five big players with Apple, Samsung, Huawei, Xiaomi and OPPO all showing growth for the year at the expense of smaller players, who saw their slice of the market decline dramatically.

Another analyst, Strategy Analytics, saw an even bigger decline in smartphone shipments in Q4, calculating that they had tumbled nine percent -- the biggest fall in smartphone history.

Linda Sui, director at Strategy Analytics, said: "The shrinkage in global smartphone shipments was caused by a collapse in the huge China market, where demand fell 16 percent annually due to longer replacement rates, fewer operator subsidies, and a general lack of 'wow' models."

However, Strategy Analytics said that, on a full-year basis, global smartphone shipments grew one percent and topped the 1.5 billion devices mark for the first time ever.

Looking at the market by vendor, IDC said Apple experienced a slight downturn from the previous holiday quarter as iPhone volumes reached 77.3 million units, a year-over-year decline of 1.3 percent. Still, the launch of the iPhone 8, 8 Plus, and iPhone X did push Apple past Samsung in the last quarter of the year.

"Although demand for the new higher priced iPhone X may not have been as strong as many expected, the overall iPhone lineup appealed to a wider range of consumers in both emerging and developed markets," IDC said.

Samsung remains the overall leader in the worldwide smartphone market and while shipments for the fourth quarter were down 4.4 percent, its total shipments were up 1.9 percent for the year. The Korean giant is due to launch its next flagship, the Galaxy S9, next month.

Despite increasing pressure from other Chinese players such as OPPO and Vivo, Huawei holds on to the number three slot worldwide, shipping 153.1 million units, up 9.9 percent, from the 139.3 million shipped in 2016. IDC said Huawei's Mate series and Honor sub-brand continued to drive crucial volume in numerous markets, while the Y series is doing well at the low end. However, IDC said getting into the US market through a big carrier deal remains critical for Huawei if it wishes to eventually dethrone market leaders Apple and Samsung.

Xiaomi managed to double its share to seven percent from 3.3 percent during the holiday quarter last year as it continues to focus on growth outside China, with India and Russia being two of its largest markets. OPPO dropped one place to fifth position in Q4, shipping 27.4 million smartphones but managed to maintain 12 percent growth for the full year.

iPhone sales disappoint despite all the hype

iPhone sales slip 1 percent compared to the year-ago quarter despite all the hype surrounding the iPhone X.

Sales of the iPhone X may have been slower than expected, but Apple still got the top position over Samsung in the last quarter of 2017.

Despite reports of slowed production, the iPhone X was the most recommended model out of the newest Apple smartphones.

Here's when Samsung will announce the Galaxy S9

Unpacked: Samsung's Galaxy S9 reveal is set for February 25 in Barcelona, and it's all about the camera.

Join Discussion for: ​Despite the iPhone 8 and iPhone X, smartphone...