I started wearing a Microsoft Band shortly before they went on sale in the UK. In the months since, I've found it useful in ways I didn't expect, but like the makers of these devices and most of the developers creating apps for them, I'm still working out why.

I pick up my Band mid afternoon. I'm coming down with a cold so I skip the workout session that would showcase the fitness tracking options, because I'm busy coughing.

My initial impression is that I'd like the band to be half as chunky and to come in colors (I'm very fond of lime green); with everything else we choose to wear on and about our person, we choose for decoration as well as for utility.

I'm also surprised that I need a medium size; I have small wrists and long fingers and usually need to have links taken out of watch bands and bracelets, but the medium on its snuggest fitting is almost too tight.

I loosen it progressively over the afternoon and push it up my arm a little, the way I wear any watch. I put the flat screen on the inside of my wrist; it's more comfortable and easier to see.

I'd like the option of turning the time and counter display sideways so they're vertical, but horizontal makes more sense for most of the functions like quickly checking email subjects. After a couple of weeks wearing the Band, the horizontal layout seems so natural I don't remember wanting to have it vertical, until I look back at these notes.

The first app I install is Band Sensor Monitor which shows the results of all the individual sensors. It's fun to see that my galvanic skin response is a quarter of my husband's. I was physically unable to get the first few generations of iPhone to detect my touch and the readings seem to confirm why. 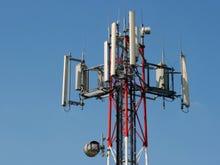 But mostly I want to check my skin temperature. The most accurate exercise monitor I tried a few years ago, the BodyMedia Fit, used the combination of galvanic skin response, accelerometer and skin temperature (and whether it was rising or falling) to do accurate calorie burn estimates - the Band should be even better because it has a heart rate monitor too. When I pull out my collection of wearables for comparison, I find the heart rate tracking is as accurate as a Polar monitor, and far more convenient because you have to strap the Polar tracker to your chest.

But for the first day I'm wearing it, I just want to find out if I have a slight fever.

It's likely I do: the 93.5 reading (remember it's skin temperature, not the core temperature you get with a thermometer in your mouth or ear) is a couple of degrees higher than my husband and it won't fall much until I start to feel better.

Other Band users tell me they've used the sensor when they had flu, to see if their fever was going up or down. I also get into a discussion of how men and women tend to have a different temperature range; I already know women's temperature fluctuates throughout the month based on their hormone cycle and that gives me my first idea for a Band app - a really accurate period tracker.

I get my second idea as soon as I wake up in the morning. I use a Sonos ZP100 streaming music player as my alarm clock; I usually control it with an app on my phone, but rather than reaching for my phone, I'd love to snooze the radio or turn the volume down right from my wrist.

Smartphones are becoming remote controls for many pieces of our lives, but the remote control that's already in your hand is more convenient - as long as developers can restrain themselves to the simple controls that work on a tiny screen.

I start using the built-in features straight away. Step tracking is interesting, at least when it's new to you. If this had been the first fitness wearable I'd used, seeing how much or how little I walked in a day would have made me walk a little more to meet the daily targets, but I've been doing that - first with a Fitbit and then with my phone - for a few years, and I've already added all the casual extra movement I'm likely to do. But having the haptic buzz of meeting my daily goal for walking is a nice feeling.

I wouldn't have put a fitness tracker on my wrist just to see my steps more easily, although I certainly look at the numbers more than when I had to pull a Fitbit out of my pocket. And I tell the same stories using the Band as I did using a Fitbit or step tracking on my phone; knowing that I walked two thirds of a mile to get from a conference session to the shuttle bus amuses me the same way a notification from Fitbit telling me I've climbed the height of the Eiffel Tower after a week of meetings.

I keep the Band on my wrist because I find enough of what it does useful. And because it's on my wrist rather than in a pocket, I can easily remember to charge it - more often than not, my Fitbit had gone flat before I remembered or got reminded to plug it in.

If I remember to plug it in while I shower that tops it up enough to keep it going for another day; if I let it go flat, a full charge takes about 90 minutes. And Microsoft is right about the Band being splashproof; I've got into the shower only to realise I'm still wearing the Band at least twice now, with no ill effects.

Yes, I can see my email on my phone and I usually pull it out of my pocket a few times a day to check if I need to look at my mail. Having the Band buzz for new mail has had me dealing with urgent messages straight away enough times to it to feel really useful, as well as reassuring me that yes, I can ignore the mail I've just got because it isn't urgent.

Occasionally I see a message that I expect the Clutter service on Office 365 to have filed for me - and when I look on my phone, it has, so I had to spend a little time setting up the VIP list of who I want to hear from most, but I don't want to have to deal with keeping that up to date as my projects and contacts change.

What the Band needs is something like the focused inbox from Microsoft's mobile Outlook app; just as Clutter sweeps away messages I'm likely not to care about, highlighting the most interesting messages to buzz me with would be far more useful - and the same for updates from Twitter.

Something that can get my attention this easily needs to match its power with the requisite responsibility.

When I carried a Fitbit, I didn't usually bother to pull it out of my pocket and strap it onto my wrist for sleep tracking either; because the Band is already there, I've done that far more often. It's disturbing to see quite how little sleep I get on an overnight flight home from the US (and it's geekily amusing to have to put your watch into flight mode).

I can see how much less sleep I get when I have a stressful week, and the nights that the Band tells me I've slept better are followed by mornings when I feel less tired. It's hard to change anything you can't measure; I haven't yet used the information to try and change my sleep habits, but I feel like I could if I wanted to.

I play around with other apps; one that promises to tune the UV sensor to my skin coloration, to give me much more accurate predictions for when I'm likely to get sunburn, games that turn the Band into a controller for Pong and an air guitar playing chords on my phone or to control a music player on my phone, and others that reminds me to move around every so often if I've been sitting still.

They're fun and useful, and there are new apps coming along all the time. None of them change your life though, which is where the question of what wearables are for comes in.

We carry smartphones for the same reason we carry laptops and tablets, the same reason we've carried mobile phones for the last couple of decades, or pen, paper, newspapers, books and the rest including watches) for all the decades before that - because they're useful and make our lives easier or more interesting. It's what we do with them that's been life changing.

Perhaps because wearables are on us rather than in our pockets and bags that we expect to have a closer, more important relationship with them. We expect them to act more like the amulets and talismans that we wear than like our phones; from wedding rings to souvenir key rings to a crucifix, rosary or St Christopher medallion to the literal life-saver of a medical alert bracelet, the things we choose to always have with us have a very personal significance.

We're still finding out how wearables will shift from something useful to something that has a special meaning for us. Useful as it is, I think I'm wearing my Band as much to find out if there is something wonderful it's going to do as for anything it can already do.

Wearables to improve your health and wellbeing SEE FULL GALLERY

Join Discussion for: Diary of a Microsoft Band user: Here's what...