Digital transformation: How one bank is using AI, big data and chatbots to create new services 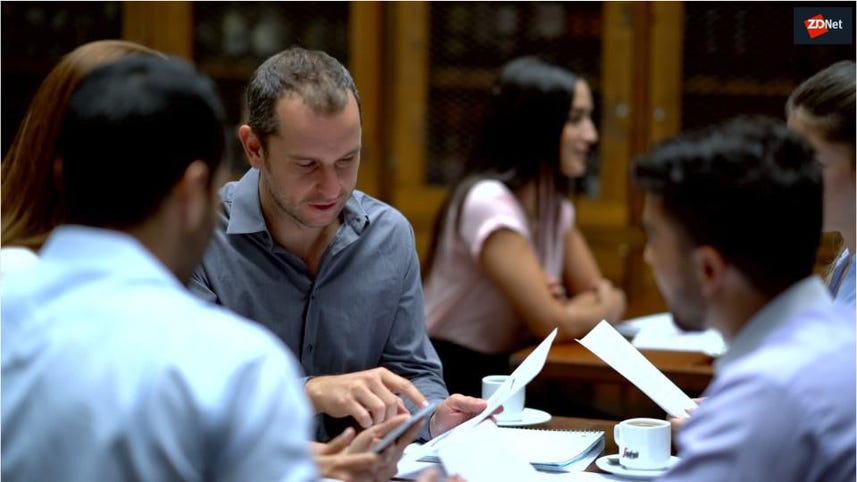 Anyone looking for an industry to illustrate the implications of digital disruption need look no further than financial services.

High-street branches continue to close at an alarming rate as many services go online, while the traditional banks face stiff competition from online rivals who don't have to worry about bricks-and-mortar at all – plus a horde of fintech startups touting new options like cryptocurrencies and more.

Such is the potential for change that Gartner estimates as many as 80% of traditional banks will go out of business by 2030. The analyst says established financial services providers will have to move faster by building digital platforms or finding niche products.

Royal Bank of Scotland Group is one financial services giant that claims to be taking a proactive approach, rather than the reactive response to IT and business change that tends to characterise big-name banks.

Executives at the wider RBS Group – which includes Royal Bank of Scotland, and also includes NatWest, Ulster Bank and Coutts – are certainly aware of the dangers of a reactive approach to technology.

Technical issues caused by a software update in June 2012 led to a high-profile IT failure that affected more than 6.5 million UK customers for several weeks. The organisation was eventually fined £42m by the Financial Conduct Authority.

Simon McNamara, chief administrative officer at RBS Group, was brought into the bank in the wake of that episode in September 2013. He says the very reason he was brought into his job was that the executive team believed he was the person to "fix" the bank's IT systems and to create resilience.

McNamara refers to "material progress" in regard to achieving that resiliency. It's provided a platform for him and his colleagues to face the challenge of digital disruption in the banking sector head on.

In fact, pushing an innovation agenda has been one of his key aims since the day he started – yet it was something that some of his executive peers were reticent should be a focus when he first joined the bank in 2013.

"I was actually told by some people that you're not going to be able to do that," says McNamara. "Some people said I was here to fix things and should forget about innovation. And that's literally where we started – and I'm somewhat proud of actually ignoring that advice and building an innovation agenda here, which is second to none in the UK in terms of any financial institution."

McNamara hopes this agenda will help the banking giant to disrupt the financial services market, rather than being disrupted itself. Banks must be open to partnerships with all kinds of external organisations, be it suppliers or startups.

"Our role at the end of the day is to create a space in which good things can happen, as opposed to being the generators of good things," he says. "We've developed an 'engage and see' approach, which is where we have some thoughts about how we think things might develop, but what we've actually done is create capabilities that we develop and test with our customers."

He says those conversations are characterised by a sense that it's much better to engage with disruptors, such as suppliers and startups, rather than sitting outside and waiting.

"I think that network is very important, and how you work with other parties," says McNamara. "Some of it is going to run into a dead end. Some of it is going to develop into something that's reasonably mainstream, and there might be something in there that makes quite a substantial difference and that gives you quite a significant learning. But we won't find anything out if we just sit here and wait for things to happen."

So, what do those experiments in innovation actually mean for customers of RBS and its high-street brands? McNamara says NatWest is involved in a range of digital developments, including Mettle, its digital bank for small businesses.

Mimo is currently being beta tested with 5,500 customers on an invitation-only basis. The app provides a social feed of spending and credit, as well as alerts on upcoming bills for insurance, subscriptions and utilities. NatWest is currently testing concierge services for things like restaurant bookings. It aims to extend the rollout of Mimo later this year.

It's the kind of development that NatWest hopes will demonstrate that, while it might be a traditional bank, it is searching furiously for ways to service its customers in new and interesting ways. One of the people who helps brings potential ideas to market is Kevin Hanley, head of innovation at RBS and who reports to McNamara. He says responding successfully to digital disruption is a continual work in progress for NatWest.

Hanley says the bank has historically talked about emerging technologies – whether that's blockchain, AI, big data, or nanotech – as discrete entities that are developing exponentially. Hanley now believes there's increasing evidence over the past 12 to 18 months that many of these technologies are starting to come together in a much more significant way.

"You start to see the emergence of strategic things, rather than discrete technologies," he says. "The way that those technologies are coming together is disrupting the business of banking and leading to new services for our customers."

Hanley says NatWest's work on finance app Mimo is a good example of how the bank is using data to create personalised services. When it comes to human-digital interfaces, he says NatWest is working on a range of customer-focused developments.

"There's our progression from AI chatbots, to some of the work we're doing in the voice space, through to experiments around human-digital avatars that we're doing with companies, such as Soul Machines. But we're responding to the way that all of us use and interface with technology," he says.

The bank is now taking these developments to the next level as part of its human-digital experiments. A new Cora prototype has been built using AI. This avatar allows customers to have a two-way verbal conversation with Cora via computer screen, tablet or mobile phone.

NatWest will only deploy the technology if it successfully completes a pilot. Hanley believes that, as technological innovations like Cora are placed into the hands of NatWest's customers, so their behaviours begin to change. And it is those changing behaviours that then drive the emergence of other new business models that disrupt the business of banking.

"Increasingly, our work as a bank is about doing something for our customers that helps position them for that world that's changing around us," he says. "That's the thrust of what we've been about in terms of the innovation agenda over the course of the past five years – and it will continue to be our objective."