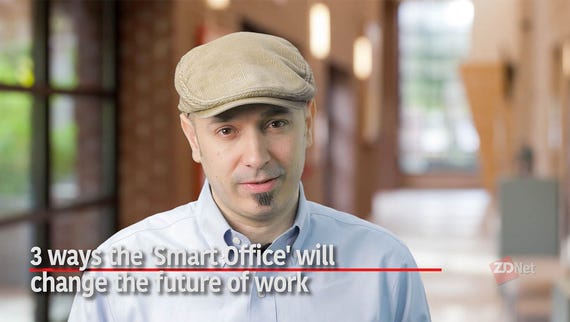 Video: The 'smart office' of the future: 3 factors to watch

Employees know that when they work in efficient workplaces with good collaboration tools and automated processes, they feel better about their work.

Aruba, a Hewlett Packard Enterprise company, recently released a study focusing on workplace motivations and the impact of technology.

Its study, Digital Revolutionaries Unlock the Potential of the Digital Workplace, reveals both business and human benefits of more digitally-driven workplaces,

The report showed that digital tools unlock human benefits: "Digital Revolutionaries" -- employees who work in fully-enabled digital workplaces where new technologies are in widespread use -- were more likely to have strong job satisfaction, and more likely to be positive about their work-life balance than the "Digital Laggards" (those who have less access to workplace technology).

It found that 66 percent of respondents said they would like to see fully automated equipment brought into the workplace and almost all respondents (94 percent) believe their workplace would be improved through greater use of technology.

Employees were hugely positive about digital technology, saying it has improved workplace motivation (61 percent), improved collaboration with other employees (66 percent). and improved their ability to grow and learn new skills (68 percent).

Read also: The Digital Workplace in the Cognitive Era - TechRepublic

While automation can be perceived as a threat to job security, the research found that there was widespread enthusiasm for it. Seventy-one percent of respondents said they would welcome a fully automated workplace in the next five to 10 years.

The study also shows that companies that are less technologically advanced are at risk of falling behind the competition. It also notes that companies must be vigilant as more digital-savvy employees are taking greater risks with data and information security.

The study also revealed that cybersecurity is a challenge for employers.

Around 70 percent of employees admitted to risky behaviors such as sharing passwords and devices.

Read also: How much time do we waste on conference calls?

A quarter of employees have connected to potentially unsafe open Wi-Fi in the past 12 months. A further 20 percent said they use the same password across multiple applications and accounts, and 17 percent admitted to writing down passwords in order to remember them.

Janice Le, chief marketer for Aruba, said: "The consumerization of the workplace is a very real movement. Employees are consumers and we bring consumer expectations with us to work."

Companies must create the digital workplace with security as an integral part of the design, taking human error into account. To achieve optimum security, IT must adopt emerging technologies in networking, cloud computing, AI, and machine-learning.

How much should CXOs trust vendors when purchasing new solutions?

B2B technology buyers are empowered to choose their own solutions -- but buyers do not trust all they are told by vendors, according to a new report.

In this age of instant communication, there is pressure on employees to be "switched on" all hours of the day. But do we really have the mental attitude to totally disconnect from work?