Part of a ZDNet Special Feature: Tech and the Future of Transportation

Olivia Krauth is a Multiplatform Reporter at TechRepublic.

Full Bio
on February 1, 2018 | Topic: Tech and the Future of Transportation 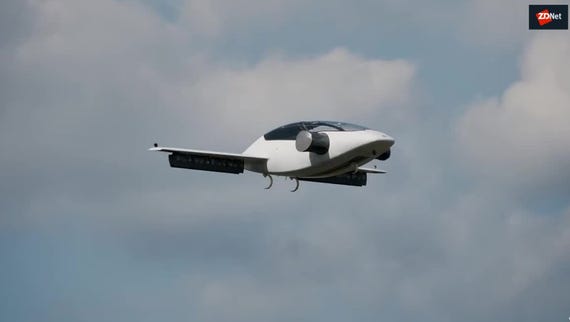 Autonomous flying cars may seem like an image out of a science fiction movie, but the technology already physically exists: Dubai began testing electric taxi drones in September 2017.

Similar to a two-seater helicopter, the Volocopter taxi is designed for 30-minute flights to and from 'voloports,' which are basically train stations for flying taxis. But, despite the tests, experts agree: Autonomous flying taxis almost certainly won't get off the ground as a commercially viable reality in 2018.

"Anything beyond early prototype testing -- and even that would be nothing more than a novelty -- on this in the US in 2018 is highly unlikely," Carl Doty, vice president of emerging technology research at Forrester, said.

One key question: Are flying cars even legal? Government regulations are a key obstacle to a full commercial launch, especially in the US.

"The FAA continuously works towards integration of new technology into aviation," an FAA spokesperson said. "This technology is highly promising and we are vigorously working towards the development of policy and regulations to support it. As with previous technologies we've incorporated, those policies will maintain the same level of safety and rigor that our existing policies support."

The FAA has been cautious when it comes to recreational drones, so it would need to do a "180-degree turn" to allow flying taxis, Doty said.

Flying taxis would most likely need a Part 135 certification from the FAA to run as passenger transportation for compensation, Samuel Engel, the leader of ICF's aviation division, said. For the license, an operator would need "operational control" of the aircraft.

Historically, the US has been the aviation world leader, including for pushing the regulatory environment, Engel said.

Other obstacles to commercial deployment include safety issues, the technology's high costs, and a lack of critical infrastructure to support such vehicles.

"The infrastructure that exists today won't support it," Tom Brusehaver, a project manager specializing in aviation, said. "The space needed to deliver a passenger to the front door of your office won't work."

Flying taxis would need to land close to passengers to differentiate itself, Bryan Mulligan, chair of the transportation technology committee of the National Electrical Manufacturers Association (NEMA), said. "It is just a competitor to a helicopter."

Landing areas would need to be close to common places people need rides from, but also obstacle-free to ensure safe, legal flying.

"To be consistently available, the taxis would need to have the option of operating by instrument flight rules," Engel said. "Instrument approaches are quite strict about what is considered an obstacle near the landing pad and how close those obstacles can be."

The technology, while it physically exists, will need to greatly improve to become practical, Brusehaver said. Currently, charge times are two or three times the length of the flight time. The cost of the electricity and downtime, along with potentially sky-high liability insurance rates, will be passed on to the passengers, Brusehaver predicted.

Several air taxis use a parachute system for safety, but that system needs several hundred feet for occupants to safely land, Brusehaver said.

"From about 30 feet up to several hundred feet, there will be a 'dead mans zone' where there is no usable backup safety system," Brusehaver said. "If something goes wrong in this zone, people will get very hurt."

Cybersecurity is also a potential shortcoming, said Maryville University cybersecurity professor Christian Espinosa. Like with regular taxis, both physical and wireless attacks are possible. But in the air, you can collide with other drones, birds, or crash on the ground, Espinosa said. If the technology takes off in large cities, these threats would be amplified due to the number of flying taxis that would likely be in the air at the same time.

"A mid-air collision between several taxis due to falsified position data being sent to each taxi with the intent of causing a collision can be fatal," Espinosa said. "Message integrity and authentication will reduce this risk."

Another big obstacle: Society. The noise of flying taxis doesn't have a solution in sight, Mulligan said.

"These devices are going to be incredibly loud, and we won't tolerate them flying over our houses or cities," Mulligan said.

"It is difficult to see the social business case of society allowing flying taxis, given that the benefit is relatively small -- rich folks can save a bit of time versus a regular taxi -- and the penalty to society will be huge...they will drive everyone crazy!," Mulligan added.

But if not now, when? The regulatory environment surrounding flying vehicles is unlikely to be ready before 2027, the Gartner report predicted.

Andrew Green, a pilot and CEO of MyRadar, predicts it will take five years before flying taxis start catching on, noting that cities in China, Europe, and the Middle East have more ambitious goals than the rest of the world.

"The last several years have shown us the progress being made in the autonomous ground vehicle industry, and the autonomous air taxi is the next natural extension of that," Green said.

However, a slew of tech companies are working on flying taxis, and have deadlines to launch their services.

Volocopter CEO Florian Reuter said the company aims to fully launch the service within five years, according to ZDNet's Corinne Reichert. Airbus hopes to bring their version of the flying taxi to market by 2020. Uber hopes to launch its airborne ride-sharing service, UberAir, by 2023, and announced it is working with NASA to create an air traffic system in November 2017.

Although flying cars won't arrive in 2018, tech companies hope road-bound driverless taxis may expand this year. Experts say 2019 might be a more realistic breakout year for the technology.

General Motors (GM) plans on deploying fleets of autonomous taxis in 2019, the company announced in December 2017. Analysts told TechRepublic's Alison DeNisco Rayome that the timeline is "certainly feasible," but will "require a lot of things to fall into place."

After initial tests in October 2016, Uber is already using human-monitored self-driving cars in multiple cities, and are hoping to move to a human-free model through a partnership with Volvo, Doty said.

"(Uber's) partnership with Volvo is smart in my opinion, because it's a car brand whose strength comes from its leadership in vehicle safety," Doty said. A small-scale deployment is possible by the end of 2018, but 2019 is more likely, Doty added.