While the iPad doesn't have much to fear, a new generation of E-ink-based tablets and smartphones are offering superior outdoor readability, long battery life, and reduced eye strain.
Written by Ross Rubin, Contributing Writer on May 14, 2019 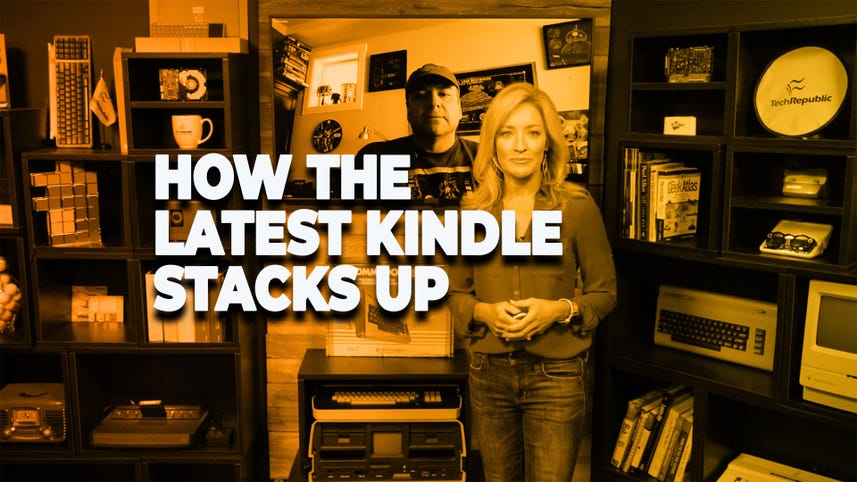 Paper can be used for both reading and writing, but the vast majority of e-paper displays on products like Amazon's Kindle are used exclusively for reading. This is due to a number of technology and market forces. For example, when Amazon launched the Kindle, its first major digital device, the product tied into the book-buying franchise that was the company's foundational strength. Furthermore, unlike far more popular LCD and OLED technologies, E-Ink displays don't wash out in direct sunlight. They reflect external light rather than trying to compete with it, thus providing a reading experience that is more familiar to eyes accustomed to tree-based competition. E-paper uses little power and can display an image indefinitely without any power consumption, making for long reading times.

But people create outside as well as read. Why hasn't there been more of a market for e-paper creation devices? More than a decade ago, the One Laptop Per Child XO-1 laptop used a sunlight-readable display by a company called Pixel Qi. But the display company found no sustainable customers after the children's clamshell faded.

Today, there are a few specialized e-paper products that position themselves as hybrids of reading and writing/sketching. These devices are optimized for consolidating and marking up large documents. They tend to feature screen sizes of 10 inches or larger, such as the Digital Paper models from Sony. Sony has a long history with E-ink. The company pioneered E-Ink readers before Amazon jumped in and now has a joint venture with the technology supplier with much in the queue, according to Good E-Reader.

More recent introductions include the 10-inch reMarkable tablet, which advances on Sony's software user interface, and the curious Lenovo Yoga Book C930 2-in-1, for which an E-Ink touch screen doubles as an e-reader in tablet mode and displays the keyboard when in clamshell mode. It represents a leap in functionality (as well as price and performance) over the first-generation Yoga Books, which used LED-lit outlines for keyboards.

These larger e-paper products appeal to those who wants to be able to accomplish anything outside that doesn't rely too much on fast-moving color -- applications more like AirTable than Asphalt 9. Indeed, even Amazon hasn't revisited the large e-reader market since it discontinued the Kindle DX introduced back in 2009 (to the dismay of some). While the reMarkable tablet was introduced as more of a creative tool, it has found an audience with enterprises who have a need for its outdoor legibility. The Sony Digital Paper product has seen most adoption among professionals such as lawyers and movie script editors who need to mow through reams of documents while minimizing eye strain. While both support touch screens and styluses, these products lack the app ecosystems and Bluetooth keyboard support of Android tablets and smartphones.

But that is changing. Already in China, HiSense sells smartphones that feature an LCD on one side and an e-ink display on the other. Tapping a button in the navigation control row on either screen lets you continue working on the other. And since the crowdfunding campaign of the FreeWrite Traveler that I wrote about last fall, a number of E-Ink-equipped computing products have recently hit crowdfunding platforms. These include an 8-inch Not-eReader tablet/display from Dasung, the LTE-capable 10-inch E-Pad from Eewrite and, most recently, a 5.2-inch dual-SIM Kingrow K1 smartphone (which had not launched its campaign as of this writing). The K1 offers two weeks of standby time, a throwback to the feature phone era.

All the new products have estimated delivery dates within the next few months. A bona fide e-paper clamshell remains elusive, although the E-Pad should be sized right to work with a number of Bluetooth keyboard cases. Onyx, an early maker of Android E-Ink tablets, had previewed a 2-in-1 it originally called the Onyx Boox Typewriter, but then hit the Delete key.

There have also been a couple of basic digital memo/sketch pad products such as the web browser-equipped MobiScribe that cost considerably less than those with full-fledged Google Play compatibility. But the largest and most expensive recent intro is Dasung's 13-inch Paperlike Pro, which recently launched on Indiegogo. Unlike Dasung's smaller Not-eReader, the Paperlike Pro includes no operating system of its own but rather works with other devices as a monitor.

The Paperlike Pro best exemplifies the trait that has made e-paper more practical for applications beyond reading -- far greater responsiveness. While it still cannot keep pace with LCDs, it represents a huge leap forward from the early days of E-Ink products, where simply turning a page would result in a distracting flash effect as the display updated its image.

In addition to relatively slow refresh rates, the lack of color screen availability has made these screens no match for more common displays when it comes to consuming video or even looking at photos. Indeed, color e-paper in general has faced a tough road. Two smartwatches that used reflective color displays, the Pebble smartwatch and Qualcomm's ToQ proof-of-concept that used a display technology from now-defunct Mirasol have been among the few products to see limited distribution.

Still, Lenovo, which has been the PC vendor most willing to experiment with e-paper, has invested in an E-Ink competitor called CLEARInk. The display vendor has shown off color displays, but recent viewings indicate the same lack of vibrancy that has detracted from previous attempts. While e-paper displays are flexible and can fold, Lenovo is using a foldable LCD for its newly shown folding ThinkPad tablet.

More competition can only help the e-paper device market beyond the Kindle and digital signage. While entry-level Kindles are now very affordable, the price of these more capable devices are high compared to their LCD-based counterparts because of minimal competition and low volumes. It's unlikely that these new devices can make a significant dent in the market for LCD smartphones and tablets. However, they have stronger market potential for workers who must get their digital work done in bright sunlight. That scope of tasks demands the ability to run popular and custom applications, an issue that Android compatibility can help address.

Lenovo foldable ThinkPad X1 prototype: A big screen that bends
Bigger than the Samsung Galaxy Fold, this 13-inch tablet folds into a laptop shape for typing and productivity.

Lenovo Yoga Book C930 review:
An E Ink keyboard makes this the most unusual laptop of the year