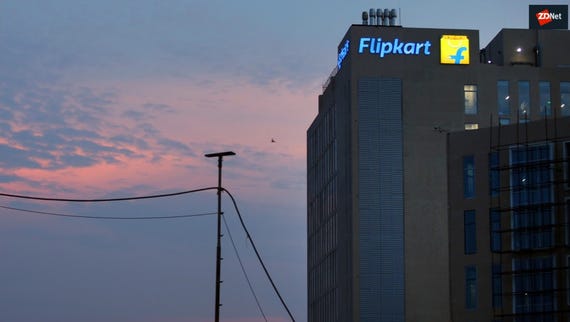 Is it possible that a purportedly business-friendly government can, in the blink of an eye, destroy -- or at least severely damage -- its most celebrated industry in the tech-meets-commerce space?

This is what seems to be unraveling, as Flipkart and Amazon face an unyielding February 1 deadline to alter their business models from one that is a direct purveyor of goods -- like Amazon in the US, for instance -- to one that is a marketplace similar to eBay.

In other words, these two companies will have to dismantle their business model almost overnight and establish completely new supply chains and vendors in order to comply with this decree, something they would not have imagined in their wildest of imaginations. Amazon has so far pumped $5.5 billion into the country, and Walmart last year forked out $16 billion to acquire Flipkart under the assumption that the country would continue to be a future growth engine for global e-commerce.

Instead, they have fallen prey to a whimsical government that is desperate to claw back into political contention. Prime Minister Narendar Modi may have aspired to create a carefully manicured image of being a business-minded visionary, wooing companies to set up manufacturing plants in his country. However, a string of decisions have quickly tarnished his image. Among them are his tacit appeasements of communal atrocities against the Muslim population such as public lynchings, and the banning of existing currency notes and the printing of new ones in order to expunge the nation of black money. The decision to ban existing currency notes eventually slowed down economic growth and caused nationwide damage to the livelihoods of the poor, while in a case of cruel irony, 99.3 percent of black money allegedly found its way back into the system in just a few months, according to Mint.

Now, all this was still fine for large portions of India's middle and upper middle class, who were in thrall of Modi and his business-friendly, 'Hindu-first' vision for India, but the common man has not shared the same sentiment. The people's frustrations have not been more clear than in the recent drubbing of Modi and his BJP party by its arch-rival the Congress party in local elections, which took place in what should have been safe beachheads of the north. So unexpected was the defeat that the BJP government had to act immediately to resuscitate its large vote bank of shopkeepers and tradespeople whom they have taken for granted since coming to power. Until now, that is.

For two years since issuing its tweaked rules in 2016 that outlined a marketplace model and no more than 25 percent ownership in sellers of its goods, the government has done nothing. In fact, as I have pointed out in this recent story, after being deluged by complaints filed by tradespeople about predatory and monopolistic pricing practices by Amazon and Flipkart, government kicked over the whole issue to industry watchdog, the Competition Commission of India. The CCI eventually declared that nothing seemed to be rotten in the states of India.

"Looking at the present market construct and structure of online marketplace platforms market in India, it does not appear that any one player in the market is commanding any dominant position at this stage of evolution of market," the Commission said in its decision. A BJP spokesperson followed this up by telling a local publication: "It seems that the [e-commerce] industry doesn't need a policy, but a set of rules will help in taking the industry to the next level," a senior Commerce Ministry Official said to Indian tech website Factordaily.

This is despite an e-commerce draft policy that made the rounds asking for the clipping of wings of monopolistic, global players with massive warchests, albeit via a sunset clause, that would allow them some time to rejig their business models. The fact is that Amazon and Flipkart have used VC funding to be able to flog things at ridiculously low prices in order to grab market share. The fact also is that offline retail, $700 billion in size compared to online retail's paltry $20 billion, is simply unable to compete with global-capital funded steep discounts.

It is widely-known that Amazon and Flipkart, despite the rules, conduct an enormous part of their operations via the use of seller entities, which they have heavily invested into as purveyor of goods. None of this is hotly disputed. But instead of providing clarity on this policy in advance, thereby allowing time for Amazon and Flipkart-owned online retailers to migrate to a new model methodically via a sunset clause, the government, stricken by the spectre of political defeat in the upcoming national elections in three months, has decided to resort to their own desperate measures, the health of e-commerce be damned.

The result of all of this? Amazon may well see a third of its $6 billion in sales evaporate, at least for now in order to comply with the new rules; Flipkart may see a quarter of its sales vanish. According to ratings firm CRISIL, that loss could be as high as 40 percent of revenues in two years, amounting to between Rs35,000 crore ($5 billion) and Rs40,000 crore ($5.71 billion). Flipkart Chief Executive Kalyan Krishnamurthy immediately sent a letter to the government requesting for more time.

"Redesigning numerous elements of our technology systems to ensure that we can validate and evidence our compliance, in such a compressed period of time, has caused us to divert significant resources," wrote Krishnamurthy. Flipkart ships between 500,000 and 600,000 packages a day and Amazon alone has 400,000 sellers. Therefore, both companies say that the new rules, sans a sunset clause, will cause a lot of trauma to their operations and sales.

For now, the government is standing firm on its decision, reiterating yesterday that it will not extend the February 1 deadline despite Amazon and Flipkart both requesting for an extension. Look for this to change if the BJP wins the upcoming election.

Tim Cook says the company won't be flogging India-specific phones to take advantage of this sizzling market, so the question remains as to how Apple plans to battle its far more inexpensive Chinese counterparts and survive in India.

Swedish YouTube sensation PewDiePie and his supporters feel threatened by the rapid creep of corporatism that they think is sullying a platform that was built for and has been nurtured by individual expression.

Japan is desperate for Indian techies, but will they bite?

As the US clamps down on Indian H1Bs, Japan emerges as a potential savior for this beleaguered cohort. Yet, a cultural chasm between the two countries could upend this golden opportunity.