Mozilla's annual report shows how it's spending the revenue it gets from browser search engine deals.
Written by Steve Ranger, Editorial director, ZDNet on Nov. 26, 2019 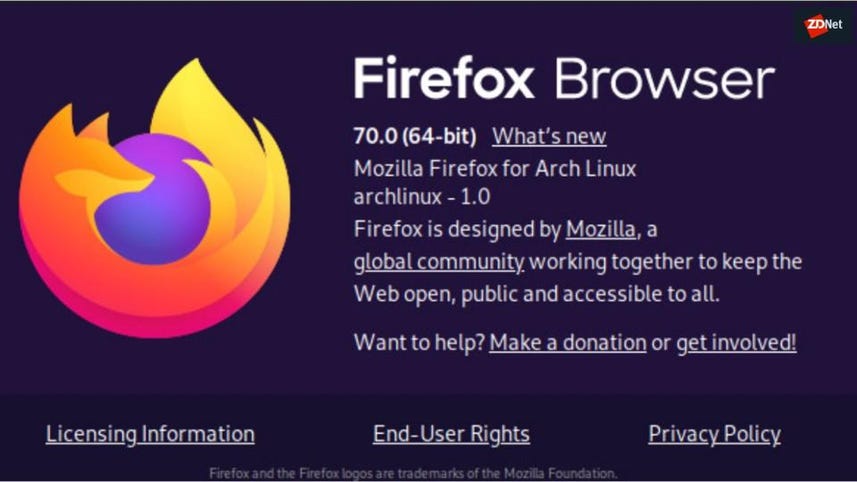 Browser-maker Mozilla has set out the details of its ongoing efforts to promote internet privacy, alongside details of the revenue it has generated from its various internet search deals.

The majority of Mozilla Corporation revenue is generated from global browser search partnerships, which include Google, Baidu and Yandex. In 2018 Mozilla Corporation generated $435 million from royalties, subscriptions and advertising revenue, compared to $542 million in 2017, which it described as an 'outlier' due to changes in the search revenue deal that was negotiated that year.

Revenue from Mozilla Corporation and donations to Mozilla Foundation are reinvested to fuel Mozilla's efforts to 'protect internet health', the organisation's annual report said. This report details how Mozilla operate, includes details from its financial reports for 2018, and is timed to coincide with Mozilla's non-profit tax filing for the previous calendar year.

Mozilla was founded as a community open-source project in 1998, and consists of two organisations. The Mozilla Foundation, which aims to promote the 'health of the internet', and the Mozilla Corporation, which creates products and explores new technologies.

Mozilla has said that the Firefox browser with its new Enhanced Tracking Protection (ETP) feature switched on by default is now blocking more than 10 billion trackers per day – roughly 125 trackers per Firefox user. The browser-maker started offering ETP as an option in August 2018, before making it a default feature in September this year.

Mozilla said that the pervasive and hidden nature of third-party, cross-site tracking on the web has allowed companies "virtually unfettered access to the data generated by people's online activities". This in turn has has enabled micro-targeting and predictive profiles to be built by companies that influence the types of ads, services and information people are presented with online. "Without the ability to curb this type of data collection, people's control over their online experiences is severely limited," Mozilla said.

Mozilla is also using ETP in the development of future products and new technologies. In 2019, it began testing ETP in Firefox Preview, the beta version of its soon-to-be released Android browser, which is powered by the Mozilla-built GeckoView engine. In 2018 it started offering a Firefox Protection Network beta package in the US offering a combination of secure proxy and VPN functionality. "Our eventual goal is to offer a seamless free or paid hybrid subscription service globally to Firefox users globally across any of their connected devices," Mozilla said.

Other areas of interest for Mozilla Foundation include exploring the ways in which Artificial Intelligence is understood by internet users, and the role ethics should play.

Google
How to use Firefox's mobile Collections feature