Fast on the heels of the self-driving car, the self-piloting air taxi is on its way to market soon, says Bell Innovation director Scott Drennan.
Written by Tonya Hall on April 11, 2018 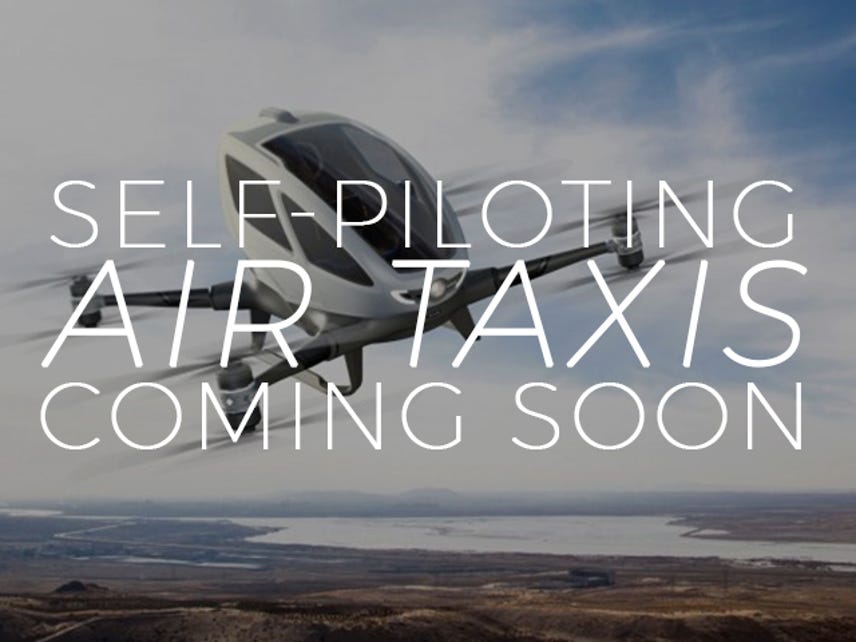 "Our first three critical parameters for the design of this aircraft are safety, cost, and noise," says Bell's director of Innovation, Scott Drennan. He tells ZDNet's Tonya Hall, "The reason that we want cost to be right at the top is because this is meant to reach commuters."

Tonya Hall: Get ready. George Jetson's flying car is right around the corner. Hi, I'm Tonya Hall for ZDNet and joining me is Scott Drennan. He is the director of innovation at Bell. Welcome, Scott.

Scott Drennan: Thanks for having me. This is great.

Tonya Hall: Tell us about your work at Bell and what do you do there?

Scott Drennan: As the director of innovation, my team and I are responsible for radical innovation at Bell. We're the team that departs from past practices and principles and tries to bring the future closer to our business.

Tonya Halll: You guys have been working on innovation for a long time, certainly long before you probably have been there. I think, 80 years exactly. What are some of the things that you've accomplished as an organization in the past?

Scott Drennan: Yeah that's a great question. It's one of my favorite slides to have in all my presentations. I call it the check your ego at the door slide. It's a slide about the 80 years of innovation at Bell Aircraft Company and also Bell Helicopter and now Bell have accomplished. It includes breaking the sound barrier with the X-1. It includes working on the lunar lander modules, jet packs, before Iron Man was even dreaming about flying as an individual vertical takeoff and landing machine. It also includes work on swept wing aircraft and of course, tilt rotors which many people know today are aircraft that fly like a helicopter and an airplane. We fielded the V-22 and we're working on our fourth generation tilt rotor, the V-280 right now.

Tonya Hall: Okay that's a lot. You've got a lot that you're working on in the future. In fact, Uber announced that they're working with NASA on self-piloting air-flying taxi. How is Bell involved in this project?

Scott Drennan: We're collaborating with Uber. We're one of their five OEM collaborators and we are developing an aircraft that would function on their network.

Tonya Hall: What's the basic method of propulsion that you're using?

Scott Drennan: Eventually, these urban air taxis will be all-electric. Bell is starting with a hybrid electric system to give us a broader mission capability set and also pave the road for all-electric operations. It's also what we call a powered lift vehicle, meaning that in vertical takeoff and landing, it operates on rotating edgewise flight through propellers or prop rotors and then converts to a wing and cruises to its destination like an airplane on wing-borne flight.

Tonya Hall: I know we're all ready for these now. We're excited to see them but when can we actually expect to see air taxis?

Scott Drennan: At Bell, we think in the mid-2020s, there will be a vibrant air-taxi ecosystem out there for people to use during their normal modes of transportation.

Tonya Hall: Where can we see them? Are we gonna see them in urban area? And where are they gonna take off and land? What kind of facility is needed?

Scott Drennan: Yeah, we're really proud to be part of the Dallas-Fort Worth metroplex here at Bell. In fact, Dallas was picked as the starter city for Uber air taxi. The hero route that they are gonna start with and we'll help them do that is from the DFW Airport to Frisco, one of the largest growing towns in America, just a suburb of Dallas. They're gonna be based in vertiports. At the airport, a vertiport much like you'd be accustomed to traditionally, but out at Frisco, probably integrated into a real estate development of some sort. In fact, I think the developers are partners there and they're looking at the Dallas Star where the Cowboys trained to be the first vertiport location.

Tonya Hall: What is the FAA's involvement in this process?

Scott Drennan: The FAA is another one of our partners, as they are with all the vehicles that we develop. We already are in conversations with them now so that we can understand the advanced technology of hybrid and electric propulsion of distributed propulsion for vertical takeoff and landing flight. So that when we get to the actual critical moments of type certification, we're all on the same page and we can quickly get these vehicles to our customers.

Tonya Hall: Can you explain, Scott, what the actual testing and qualification process looks like?

Scott Drennan: Sure. It's not too different than what we do for our normal helicopters. It's just a lot more exciting. My engineering team just loves being a part of this because in every category, whether it's propulsion, control, autonomy, we have something new to look at and new to test. So, generally, we do a subscale system testing in any of those categories. We also then do full size system testing. One of our favorite tools is a SILL, it's actually a System Integration Lab, where we integrate the flight control computers, the electrical system and the avionics system into one triple tie-in lab and we use the data from that lab to help us with certification and help us with our continued flight testing.

Tonya Hall: So this is essentially a different type of travel but all the same risk. So what kind of security measures might be imposed before a traveler actually boards?

Scott Drennan: One of the reasons that we're so excited about this from a mobility standpoint is that we're gonna really take people away from those tough parts of travel. So whether that you're stuck in a commute, whether that you have to add two hours before and after a flight, all of those things inside this operational model are being looked at very carefully. Another really important security piece is the cybersecurity as the vehicles are flying around through the urban environments. We're working our partners and internally to make sure that communications between the aircraft and the ground are safe and that the vehicles are operating through one channel of communication rather than any others.

Tonya Hall: I think this is exciting and I've been waiting for this since the Jetsons.

Scott Drennan: Me and you both.

Tonya Hall: Because I was a big fan. But realistically, who can actually afford this? I mean, is this something that everyone's gonna be able to use? Can normal commuters use this or is this gonna be exclusive travel for celebrities and such?

Scott Drennan: No. Our first three critical parameters for the design of this aircraft are safety, cost, and noise. The reason that we want cost to be right at the top is because this is meant to reach commuters. So everyday people like you and me, like your audience, who need better mobility solutions. I spend an hour in my commute today and in a vehicle like this, we could do it in seven to eight minutes. All of those minutes, I will cherish with my daughter, with my family, with my friends. We're just really looking forward to bringing this to a much larger group of people rather than just the elite set of business and VIP folks that use our helicopters today.

Tonya Hall: So you've talked about Dallas specifically and I'm assuming that you're also talking to other cities here in the United States. But are these taxis gonna be available in other countries outside the US?

Scott Drennan: Yes. When Uber first announced their cities, both Dallas and Dubai were included in the first set. Los Angeles is also included in their next set. And all of the large mega-cities across the world really are very interested in this concept. It's a mobility solution for otherwise congested areas. There's an active system down in Sao Paolo today using traditional helicopters. That'll be another great market and then of course, the European cities and Asian cities as well will be a great place to bring this to bear.

Tonya Hall: Scott, again, I can't tell you how excited I am to get on my own Jetson air travel helicopter, but you know I'll have to wait, I guess, for a couple more years. If somebody wants to connect with you in the meantime and they want to find out more about the work that you're doing or they want to learn more about Bell, how can they do that?

Scott Drennan: Sure. We have a Twitter feed at @bellflight. So B-E-L-L-F-L-I-G-H-T. I'm also available on LinkedIn and Bell is available there as well. We'd love everybody to connect with us, especially folks that are looking to contribute. We're hiring right now for programs like the urban air taxi and also the V-280. And we're looking for folks that are readers of your magazine, your audience, highly technical, accomplished folks that deal with software, deal with communication connectivity. So we'd love to talk to all kinds of people to help us get there.

Tonya Hall: Sounds good. You heard that. They're hiring. If you want to follow me, you can do that right here on ZDNet or TechRepublic. Or find me on Twitter. I love to tweet. I'm at @tonyahallradio on Twitter. Or find me on Facebook by searching for the Tonya Hall Show. Until next time.