The autonomous fleet is now at the disposal of delivery firms in the area including Domino's.
Written by Charlie Osborne, Contributor on Feb. 28, 2018 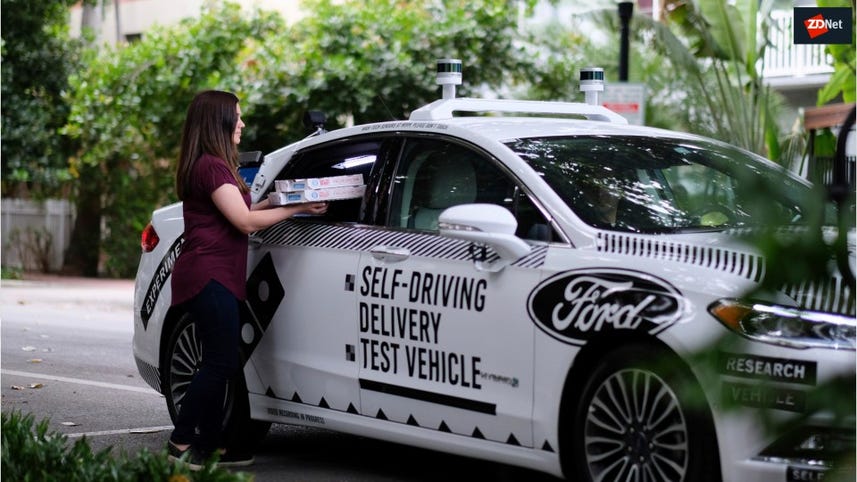 As reported by Reuters, Ford has not taken the route of rivals including Google's Waymo and General Motors by focusing on developing proprietary fleets of autonomous vehicles but has instead pushed for partnerships as a means to enter the emerging field.

Ford said on Tuesday that a pilot program has been launched in Miami with pizza maker Domino's and the self-driving fleet will be used for delivery purposes.

Working together with affiliate Argo AI, Ford will deploy self-driving Fusion Sedans first to deliver pizza, while vans and SUVs are expected to follow in the future.

In addition, grocery delivery startup Postmates has entered into a partnership with the automaker and will be joining the roster in March.

Back in October, Ford CEO Jim Hackett outlined a shift in focus for Ford from traditional manufacture to vehicle connectivity, mobility, and retooling in the smart vehicle industry.

An aspect of this pivot is an investment of up to $11 billion in electric vehicle (EV) development by 2022. However, the self-driving vehicle arena is also of serious interest as technology vendors and automakers alike clamor to carve out a niche in a market which is likely to become big business in the future as we move away from dumb cars and fossil fuels.

Ford and Lyft are already working together on software which will allow the Lyft app to communicate with Ford's self-driving platform, and together with the delivery companies, this could create a chain of services for users and discount or reward-based systems designed to retain customer loyalty.

The opportunity is here for the companies themselves, too.

In Lyft's case, for example, a rider could book through the app and request a Ford self-driving vehicle, and while Lyft's business may improve due to the self-driving vehicles on its roster, Ford would also generate revenue through per mile operation.

Additional revenue could also be generated through streaming and infotainment services, as well as in-vehicle e-commerce, according to Sherif Marakby, Ford vice president of autonomous vehicles and electrification.

It is the potential of numerous self-driving car revenue streams which Ford could benefit from the most. By agreeing on partnerships now and bringing together passenger transport, in-vehicle services, and deliveries, the company is not limiting itself to business fleets or taxi services alone -- or the time of day in which these vehicles operate.

It is a smart move and one which could maximize the potential revenue of self-driving vehicles for Ford in the future.

"We think the mixed-use scenario, people and goods, could really help us drive utilization and have the freedom to design a vehicle for that," Farley told Reuters.

In December, Ford and Alibaba Group inked a deal to partner in research and automotive services in China, including the "identification of new opportunities."