Full Bio
Posted in Between the Lines on February 14, 2020 | Topic: A Guide to Data Center Automation 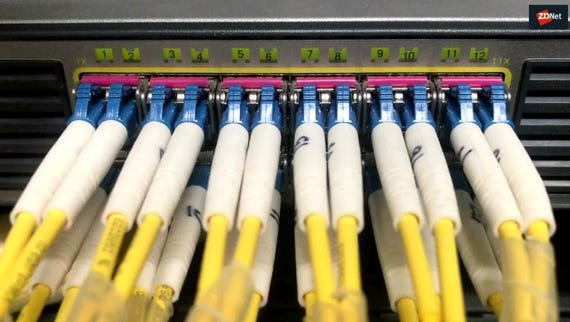 Data center spending is about to get lumpy as enterprises pull back and infrastructure spending increasingly relies on cloud providers.

Hardware is a tough business and data center spending is tricky given economic issues, unforeseen events and a broad shift to public cloud providers. Cisco CEO Chuck Robbins said the buying cycle is being stretched out due to a bevy of reasons such as macro-economic concerns and the coronavirus in China. As a result, Cisco has been working to pivot to more software and subscription-based business model and honing its security offerings.

Robbins said that 5G, Wi-Fi 6 and the shift to the cloud means there will be a healthy network buildout. What remains to be seen is how Cisco's enterprise business fares. Cisco's key growth trends will initially be aimed at hyperscale cloud and telecom providers. Enterprise product orders were down 7% in the fiscal second quarter. In Cisco's fiscal second quarter, the company's security business is growing but from a smaller base. Rumors about Cisco buying FireEye started to swirl following the company's earnings report.

"I think that we're seeing the environment is choppy. Right? We are seeing that customer spending, enterprise IT spending for on-premises data centers is choppy, and that has been true for a few quarters now. Do I have enough data to say it's a shade better or a shade worse? I don't have that data. I'm just saying it is pretty choppy and uncertain," said Kurian.

Questions are going to rise around the impact of cloud cannibalization on systems businesses that traditionally have been enterprise data center oriented. We believe such concerns are correct, with our own conversations as well as recent reports from cloud vendors suggesting continued momentum that necessarily has to weigh in part on the data center systems TAM. Net, we believe the better 2018 environment was largely due to a catchup in spend/refresh cycle, and we would look for large systems vendors with limited cloud exposure to struggle to grow revenues moving forward in light of both challenges with TAM as well as smaller competitors which are gaining market share.

2. Equinix highlights the value of interconnects, multi- and hybrid-cloud deployments.

While enterprise data center spending may be choppy, Equinix reported solid fourth quarter and 2019 results since its platform and data centers specialize in secure interconnects between enterprises and public cloud providers.

Equinix CEO Charles Meyers outlined the moving parts and how demand for private interconnects and infrastructure is growing.

The pace of digital transformation continues to accelerate, creating seismic shifts across industries, as businesses embrace interconnection as critical to their infrastructure strategy and adopt hybrid and multi-cloud as the clear architecture of choice. The secular forces driving demand for digital infrastructure are as strong as ever. Data is being created, moved, analyzed and stored at unprecedented levels. These dynamics are expanding the Equinix addressable market, as customers seek to distribute infrastructure globally, responding to increasingly demanding workloads, and the need to locate and interconnect private infrastructure in close proximity to a rapidly expanding universe of cloud-based resources.

3. AWS getting more out of its servers. You should too.

One of the overlooked items in Amazon's fourth-quarter earnings report was how the company is getting more life out of its AWS servers. Specifically, AWS is depreciating its servers over four years instead of three going forward.

There's enough trend now to show that the useful life (for servers) is exceeding 4 years. For our servers, we had been depreciating them over 3 years. So we are going to start depreciating them on a 4-year basis. It doesn't unwind any depreciation that's already been booked. It just takes the asset from its current status and extends the depreciation period, and then new assets will be put into play -- will extend out for 4 years instead of 3, and we'll continue to revisit this.

I do want to point out it's not just an accounting-related change. It's rather a reflection of the work that we've done to make our server capacity last longer. We've been operating at scale for over 13 years in this business, and we continue to refine our software to run more efficiently on the hardware. It then lowers stress and extends the useful life both through the servers that we use in the AWS business and also the service that we use to support our own Amazon businesses.

As detailed previously, AWS has developed its own Arm processors as well as the Nitro abstraction layer to squeeze more life out of servers. The efforts add up. Olsavsky said Amazon has been able to keep its infrastructure spending relatively in check over the last two years.

The upshot to this enterprise spending flux in data centers is that technology vendors will increasingly be selling their wares to hyperscale cloud providers.

Exhibit A is Intel. Intel reported a better than expected fourth quarter but did note that its enterprise and government revenue was down 7%. But cloud revenue for Intel was up 48% from a year ago as cloud service providers ramped up.

At the macro level, the insatiable appetite for data and the processing resources that need to go to make that data relevant, those trends continue, and we feel very good about how we're positioned to capitalize on this increased demand. Second, the -- as you know, from a cloud perspective, which now is bigger and bigger part of our overall data center group revenue, we expect them to continue to benefit from the trajectories that I mentioned initially. At the same time, our ability to predict the cloud purchasing and then digestion patterns are relatively hard. We know from history that at some point, they go into digestion mode and the buying patterns begin to slow down.