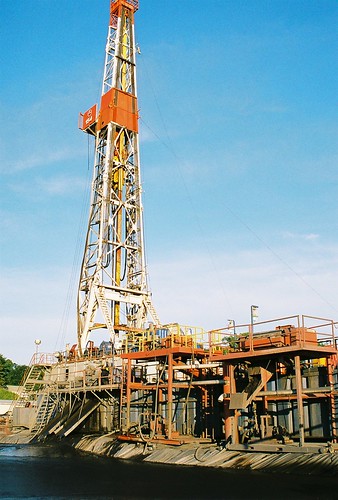 The Delaware River Basin Commission announced new laws Thursday concerning the placement of wells near water sources, intended to make the region's rules more consistent. The regulations (open to public comment) apply to the river's watershed in Pennsylvania, New Jersey, New York and Delaware. NY Governor David Paterson says he didn't want drilling regulations for one part of the state influencing the rest of it. New York has been doing its own thing.

Over the weekend, he vetoed a bill that would have prevented new permits for fracking wells in the state until May 15, 2011.

But as he did so, Paterson passed an executive order extending the ban another two months until July. So various environmental groups are pleased at the moment but why are drilling companies relatively happy as well? The order makes a distinction between what types of drilling the moratorium includes. Horizontal is in. Vertical is out.

Horizontal “hydrofracking,” or “fracking,” is the more problematic of the two. After creating the typical vertical well, the process curves the drilling path horizontally to reach more gas from a single ground surface point. To release gas trapped within tight rock formations, drillers inject chemicals into the ground at high pressure, along with large amounts of water and sand. While horizontal wells can decrease the number of vertical wells, and the associated environmental footprint directly above, the leaching of often undisclosed chemicals into groundwater is the main concern, ecologically and for public health. (The Department of Interior recently said it may require fracking fluid formulas to be revealed for wells on federal lands.)

Paterson says the distinction will help keep drilling jobs secure as the Department of Environmental Conservation studies whether the extraction method is safe. While Paterson's order appeases almost everyone a little bit, the issue will likely flare up once the moratorium ends or the DEC releases its findings. Some groups also fear fracking loopholes could connect the vertical drill holes anyway.

By carving out an exception for vertical wells that do not even exist yet, the governor did not save any jobs and did not assure the proper protection of water quality statewide. The environmental community will be watching closely to assure that industry does not side-step environmental review by conducting an onslaught of vertical drilling and then converting those vertical wells to horizontal wells.