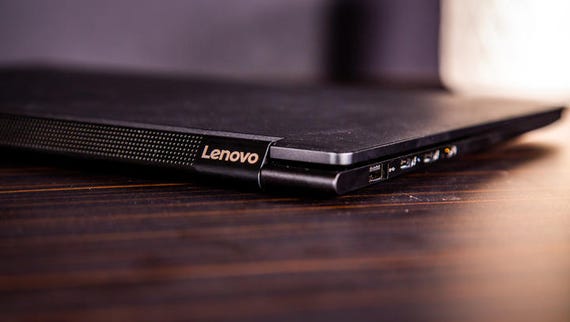 Over recent times, a number of Lenovo laptops have crossed my desk, and finally it clicked the one thing I could not do with any of them -- plug a USB-C device into the right hand side of the device.

In the case of Yoga 9i, reviewed above in the video, there is a decent excuse for it due to the device needing to make room to house its pen, but in the case of a 8th generation X1 or second generation E15, there is no excuse.

In both of the latter cases, it almost feels like Lenovo is setting out to keep laptop design stuck in the past with the inclusion of a standard USB-A port as the only USB port on the right hand side -- clearly the wiring is able to handle it, just hook us up with a newer port.

The E15 Gen 2 is particularly baffling. This machine contains the latest generation of silicon from Intel, and yet, has one USB-C port that doubles up as the power port alongside two USB-A ports that do USB 3.2 and USB 2.0, respectively. Good luck if you would like to plug in a USB-C monitor, or USB-C cable to charge your phone while keeping the laptop powered at the same time. No need to think about the future with this device.

Now a clear solution exists to this issue: Get a USB-C dock and stop complaining. However, given the dock range from Lenovo will cost anywhere from AU$160 up to AU$550, it's far from dirt cheap. The additional cost will be eaten up by businesses, but for cost-conscious consumers, the dock cost is a hefty addition to the bill for additional ports.

Perusing the user reviews of such docks shows many complaints about laptops not being able to charge off of the USB-C docks, especially under heavy loads, or doing so very slowly. In a case of your mileage will certainly vary, I'm using a Dell USB-C dock with the aforementioned Lenovo laptops, and it works fine.

It's been six years since Apple decided it could blast away legacy USB ports and opt for a single USB-C port simply because it could -- and kicked off dongle and dock hell for its users. At the same time, it also heralded the opening salvos of people asking for USB-C ports on both sides of laptops.

Many other vendors are little better.

HP seems to prefer to keep USB-C ports on the right side, Asus is a crapshoot with certain lines restricting USB-C to one side but then other models will have them, and Dell is a mixed bag.

Inspirons do not have USB-C ports on both sides, but the XPS line is a rare shining light of how it should be done.

While the port issue is admittedly far from the most pressing concern in modern computing, over half a decade has passed since USB-C properly appeared, and this issue continues to fester away; laptop makers steadfastly continue to offer USB-A ports due to legacy support.

Perhaps though, the true answer and lack of gumption to move away lies with the laptop buying and using public.

"Previous Lenovo models were designed with the USB-C port on the left for docking compatibility," a spokesperson told ZDNet.

"Although some of the latest series, including the 9th Gen X1 Carbon and 6th Gen X1 Yoga, no longer support mechanical docking, the USB-C remains on the left because our customers value and prefer a consistent placement of ports across different series of devices."

It's fair to say, no vendor financial report I've looked at has ever cited port placement as a reason for declining sales. People just make do, maybe get a dock or dongle, and go about their work. It would be nice to be able to skip a possible desk reorganisation whenever a new laptop appeared simply because you switched laptop manufacturers, and it would similarly be nice to shift off superseded USB ports, but the ecosystem and user base seems determined to remain stuck in a USB halfway house for some time to come.

Join Discussion for: From Lenovo to Apple, laptops in 2021 need...