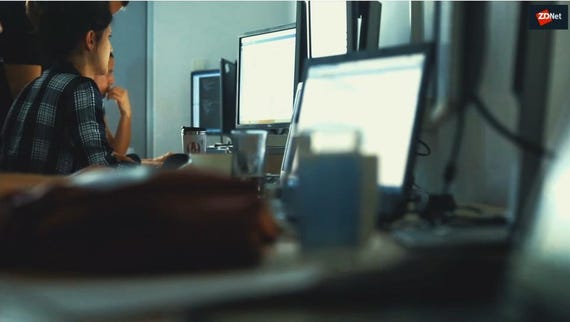 After years of slabs in the face, Android phones have experienced a mini-resurgence of keyboard-equipped smartphones via a small group of Android devices that bring forward form factors first seen decades ago. Planet Computers' Gemini and its more call-friendly successor, the Cosmo Communicator, followed the clamshell palmtop of the tradition of the Psion 5. Next came the Blackberry Key2, a followup to the original Key, which takes on the portrait thumb keyboard design.

With its landscape slider form factor, the F(x)Tec Pro1 marks the last major QWERTY smartphone design to attempt a comeback attempt in the past few years. (The last vertical slider, the BlackBerry Priv, was released in 2015 and topped out at Android 6.0 Marshmallow.) As opposed to the Gemini keyboard, which is optimized for use on a surface but can be used while held, the F(x)Tec Pro keyboard is strictly focused on the handheld scenario. Sliding up the screen puts it a 155-degree angle that, while comfortable, cannot be adjusted. The angle is also helpful for consuming media when the phone is on the surface.

I recently spent a few weeks using the device. As was my early experience with the Gemini and especially the BlackBerry Key2 I found that returning to a physical keyboard requires some adjustment. With its modern narrow aspect ratio, the Pro1 has room for practically every standard keyboard key among its five rows in the place you'd expect it. It even sports a Control key for standard keyboard commands such tasks as copy and paste. Unlike on the Key2 and Gemini, there's no need for special modifier keys for such common punctuation as periods and commas. And the width of the keyboard allows for ample spacing between each key, minimizing wrong key presses.

On the other hand, when it comes to thumb keyboards, bigger isn't always better. The device's width requires some thumb extension to reach the middle keys, even for my relatively large hands. And several smartphone apps, such as Instagram, refuse to rotate into landscape mode, at least not without extra software. This leads to a hesitance to reveal the keyboard which, in part due to the unusual hinge, requires more force and coordination than the simple screen push required to reveal the screen on the Priv and older horizontal sliders such as the long-obsolete Motorola Droid 4. Perhaps owing to the letters' smaller size, the keyboard backlight does not seem as bright as the one on the Key2 or that ancient Droid. (The Gemini keyboard is not backlit.)

The Pro1's display sides taper in the style of Samsung Galaxy devices. While this makes for a nice design flourish, the curve on the left side of the screen led to accidental key presses when trying to type the top row of the keyboard. I would have also preferred to have the fingerprint reader on the back or the screen versus the side. While that placement facilitates a uniform finger angle in both portrait and landscape orientations, I found myself accidentally activating it often when handling the device. Finally, the Pro1 lacks any of the nice longstanding shortcuts of the Android-based BlackBerry devices such as automatically putting in a period when pressing two spaces and auto-capitalizing the next sentence.

F(x)Tec concedes a bit of reacquainting to physical keys is necessary but maintains that its keyboard ultimately yields better efficiency and allows one to touch type, something virtually impossible to do (at least for an extended period) on the glass. Plus, moving the keyboard off the screen allows for far more information display than when typing with an on-screen keyboard in landscape mode, particularly given today's smartphones with taller aspect ratios.

After achieving an early win with the pioneering Danger Hiptop/T-Mobile Sidekick and the Android-based HTC Dream/T-Mobile G1, landscape sliders never achieved the passionate following of Psion and Blackberry devices. Many arrived late on the scene in messaging phones on the cusp of the multitouch revolution. F(x)Tec also maintains that early Android landscape sliders were not premium devices. While the company's debut effort doesn't go head to head with the most advanced smartphones in terms of specs, it compares favorably to contemporary keyboard-based alternatives. The Pro1 uses a Snapdragon 835 as opposed to the Snapdragon 660 in the Key2 and a MediaTek Helio X25/X27 in the Gemini, both of which were released in 2018.

While the keyboard layer adds significant girth, the Pro1 doesn't have to make any concessions in terms of screen size like the Key2 or usage as a phone like the Gemini. Still, the Key2 presents a more convenient typing option while on the go while the Gemini offers the closest thing to a touch-typing experience for longer typing sessions while seated at a surface.

BlackBerry KEY2 review: An old-school concept, updated
The BlackBerry KEY2 progresses the design and feature ideas that were expressed two years ago in the KEYone.